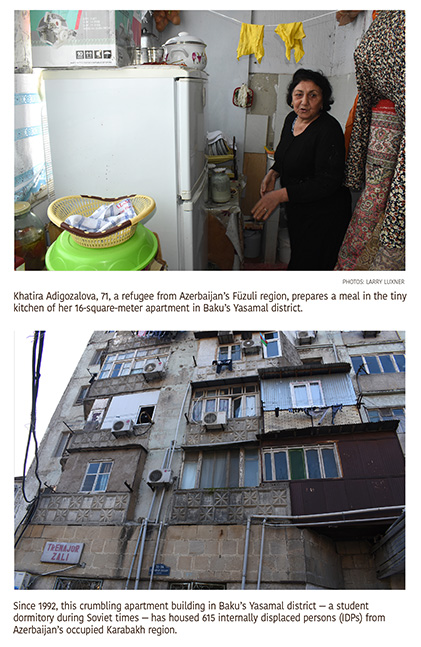 BAKU, Azerbaijan — Once upon a time, Khatira Adigozalova, director of her town’s mobile library, lived with her husband and three children in a spacious two-story, eight-room private home in Füzuli, a prosperous district in the Caucasus republic of Azerbaijan.

But on Aug. 23, 1993, Füzuli fell to Armenian troops during the Nagorno-Karabakh War. Thousands had already fled the bloodshed, with Khatira and her family taking refuge in a crumbling, Soviet-era student dormitory in Yasamal, just outside the capital city of Baku.

She’s still there, along with 614 other displaced people from across occupied Karabakh.

“Because of the war, they had nowhere else to go. They live in tiny rooms, entire families each crammed into 16 square meters,” said Khalig Mehbaliyev, deputy major of Füzuli — who retains his title even though Azerbaijan hasn’t controlled the city in nearly 27 years. “Those who were toddlers at the time are themselves parents now. They live in very bad conditions.”

Khatira, 71, lives in her dingy dorm room alone — accompanied by a small TV, a tiny dining room table, a glass display cabinet with china and a fading black-and-white portrait of her late husband.

“One night, he looked at the occupied region around Füzuli on Google Maps, got a heart attack and died,” she told me through an interpreter when asked about the man in the photo.

These days, Khatira gets by making curtains and bed covers for extra cash. Like all internally displaced persons (IDPs), she receives a government subsidy of 60 manat (about $35) per month. She also gets help fro her sons — both of whom were professional wrestlers during Soviet times but now work as tmaxi drivers — as well as her daughter, a music teacher.

“Once my younger son got married, I went to sleep on an upper floor so he and his wife could have some privacy,” the great-grandmother said as she showed off her tiny kitchen on the balcony, where plastic buckets catch the rainwater when it leaks.

Khatira is one of about 700,000 IDPs from Armenian-occupied Karabakh scattered throughout Azerbaijan, living in 106 settlements like Yasamal. In addition, there are also 500,000 refugees — 300,000 of whom were expelled from Armenia proper as recently as 1988. The remaining 200,000 refugees are their descendants.

“The main difference is that IDPs get a lot of support from the state budget and receive housing and allowances. Refugees do not get those allowances,” said Rovshan Rzayev, minister of Azerbaijan’s State Committee for Refugees and IDP Affairs. “We hope the IDPs will one day go back to their own lands. With refugees, we do not have that chance.”

Rzayev’s office, like all government offices in Azerbaijan, is decorated with portraits of longtime President Ilham Aliyev and his father, the late President Heydar Aliyev. Originally from Shusha — which came under occupation by Armenian forces on May 8, 1992 — Rzayev was one of the co-chairs of a “peace platform” established in Baku in 2016 to try to resolve the longstanding territorial conflict.

“I went to meet Armenians alone in Russia,” he said. “We came to an agreement and held a conference in Tbilisi, but after all these efforts, Armenia stated that consensus was impossible…. They ran away from the dialogue.”

For years, Azerbaijan and Armenia have accused each other of human rights abuses and unspeakable atrocities. Yet thanks to offshore oil and gas deposits in the Caspian Sea, Azerbaijan is far more prosperous than Armenia. The government is using its oil profits to resettle its own refugees.

“Azerbaijan’s economy is strong and we use government resources to solve this issue. All these expenses are provisioned in the state budget,” Rzayev said as he showed us an enormous scale model display, under glass, of a typical new IDP compound now under construction — along with before-and-after photos of Azerbaijanis and their destroyed villages.

This year, Azerbaijan will spend 1 billion manat ($588 million) on IDPs; that includes 200 million manat ($117 million) specifically to construct new housing, according to Rzayev.

“They are accepted by society; this is their country,” he said. “The problem is, many IDP families still don’t have adequate housing and their living conditions are very bad. It’s a huge burden. We have to provide jobs and education for all these people. They have also lost their right to elect their own municipal officials because their districts are now occupied.”

The purpose-built IDP settlements vary in size, with some hosting up to 3,000 families. Under government regulations, each settlement must have a kindergarten, a primary school and an area set aside for small businesses such as hairdressers, shops and produce vendors.

They also vary widely in quality. In Masazir, six kilometers north of Baku, an attractive, spacious development finished in April 2013 now houses 5,000 or so IDPs. About three-fourths of the 970 families living in Masazir came from Zengilan, said Nizami Monssumov, who still retains his title of deputy mayor.

“These people crossed the Aras River and fled into Iran, which helped them come to Azerbaijan. Up until 2013, they were living in the student dormitory of the State Oil Academy in Baku,” he said. “Those who are in the worst conditions get settled first.”

Each of the units in Masazir measures 75 to 80 square meters, said Monssumov, noting that “there are 106 compounds like this one, and some even look better.”

A Conflict Frozen in Time

Arshad Piriyev, 70, has resided in Masazir with his wife, Kamina Piriyeva, 68, since 2013. Before that, they spent 20 years at the oil academy — a far cry from their previous lives in the district of Zengilan.

“We had a very big house in our village, Shayifli, with five cows, lots of sheep and trees,” said Arshad, a retired teacher. “I never needed any support from anyone. I was well-off, and then we lost everything. Our village bordered Armenia, and in 1992, the Armenians attacked our village.”

But the mutual hatred started long before that, he said.

“I once walked through an Armenian village and saw a mother with a toddler. She told him, ‘Be quiet. Otherwise the Turks will kill you.’ This is how they brainwashed their children.”

Hearing their stories — with vivid accounts of neighbors’ eyes being gouged out and then being burned alive — is enough to make any visitor shudder. Of course, it’s impossible to verify such anecdotes, but the elderly people telling them certainly seem convinced of their veracity.

“We survived only because we ran to the forest,” Kamina said. “I don’t think reconciliation is possible. Even if we forgive them, their hatred is so deep I don’t think they can ever live peacefully with us.”

Kamina said she considers her new living quarters to be only temporary. “It doesn’t matter if we have a good life here. We still dream of going back.”

As this frozen conflict enters its fourth decade, the Azerbaijani government continues to resettle its IDPs. At present, a settlement for Khatira Adigozalova and the others still holed up in Yasamal is rising further to the south, in Qaradagh.

But when asked if she’s looking forward to being relocated to a better apartment, the long-suffering woman speaks only of her ancestral Füzuli.

“I don’t want anything,” she said. “I just wish to visit the tomb of my father.”

NOTE: This reporter’s visit to Azerbaijan, as well as transportation within the country, was organized and financed by the country’s Ministry for Diaspora Affairs.

Larry Luxner is the Tel-Aviv-based news editor of The Washington Diplomat.