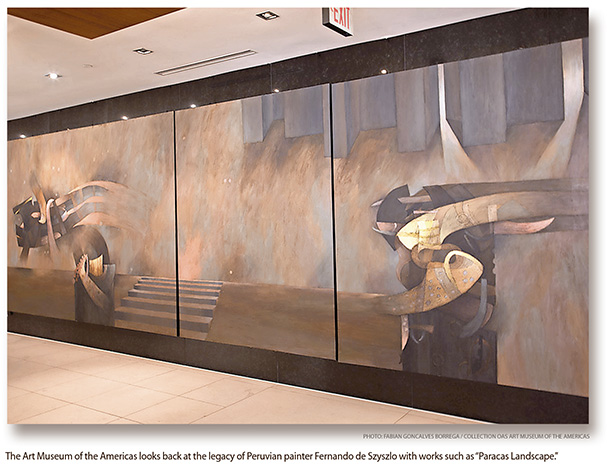 The Art Museum of the Americas (AMA) stands as the home, and launching pad, of many Latin American contemporary artists, giving them a prime perch in the nation’s capital to expose their work to U.S. audiences. In fact, the AMA is America’s oldest museum of Latin American and Caribbean art, with a permanent collection of over 2,000 works (also see stories in the November 2017 issue and September 2018 issues of The Washington Diplomat).

For its latest exhibition, the AMA continues its tradition of spotlighting those who have influenced the Latin arts scene with its focus on Fernando de Szyszlo, a renowned Peruvian painter who was a key figure in bringing abstract art to Latin America. Ironically, Szyszlo — who died last year at the age of 92 — propelled the future of abstraction in the Americas in large part by embracing the region’s past.

After graduation, a young Szyszlo traveled to Europe to study masters such as Rembrandt and movements such as cubism and surrealism. While there, he met with Latin expats such as poet Octavio Paz and began to formulate an approach that would fuse modern art with Latin American history and cultural identity.

The AMA exhibit, “Fernando de Szyszlo: A Memory,” coincides with the one-year anniversary of the artist’s death in Lima. But rather than being a tribute dedicated “in memory” of Szyszlo, the exhibition is intended to highlight the memories captured by the artist’s groundbreaking work and career. That includes his contributions to the AMA itself.

The museum was founded by José Gómez Sicre in the mid-20th century as the principal instrument of cultural diplomacy for the Organization of American States (OAS). Since its inception, it has played a special role in promoting free expression, dialogue and innovation, part of the larger OAS mission to advance democracy, development and human rights in the Western Hemisphere.

After Gómez Sicre started inviting young, unknown Latin American artists to showcase their work in the U.S., a movement started — one that allowed people from the Americas to talk about and share their cultures, history, struggles and achievements.

“This isn’t art, it’s diplomacy. Artists are always at the vanguard of what’s happening in their country, and you can see what’s happening anywhere in the world without any historical background by just looking at their work,” Pablo Zúñiga, director of the museum, told The Diplomat.

Szyszlo was instrumental in the museum’s evolution from the start. His first solo exhibition at the OAS art gallery was in 1953. He subsequently worked at the OAS as a consultant for the Visual Art Unit in 1958, and today, 10 of his works — murals, mixografias and easel paintings — have found a home in the AMA art collection. 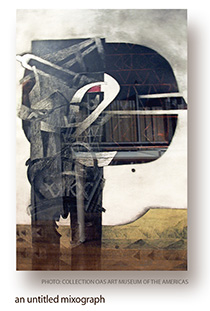 His paintings, which often depict the struggles and richness of pre-Columbian cultures in Peru like the Inca or the Chancay, are very much in line with the AMA’s tradition of highlighting the struggles of indigenous people throughout Latin American history. Those struggles continued in the postwar era and still exist today, as countries — and artists — grapple with notions of national identity and cultural expression in a globalized world. The museum brings this examination of the ancient past and the present day cohesively together with its varied exhibitions and with the help of visionaries such as Szyszlo. Zúñiga credits the Peruvian master with helping brand the museum as an early catalyst of modern art in Latin America.

“Szyszlo actually said that before Gómez Sicre and this museum, people would talk about Cuban art, Mexican art or Peruvian art, but they wouldn’t talk about Latin American art,” said Zúñiga. “This is really what the museum does, being a meeting place for people, and Szyszlo was very much a part of this coming to reality.”

The current display encompasses seven of his best-known paintings, clippings from his time working with Gómez Sicre, a documentary film and other archival material that will “shine a light onto nuances of the artist’s life and career,” according to the museum.

One of the thought-provoking paintings in the exhibit is Szyszlo’s “Untitled” mixograph (art on printed paper that emphasizes texture and depth). The piece represents the painter’s evocative allusions of the mythology, religions and customs found among pre-Columbian civilizations. Through the use of triangles and darker colors, Szyszlo embodied the desert and parched landscape of Lima as well as the creatures that thrived in it, emphasizing the natural beauty of his home country.

Another striking piece is “Cajamarca,” one of Szyszlo’s best-known paintings. “Cajamarca,” with its strong lines and sharp edges in red undertones, recalls the death of Inca ruler Atahualpa in the 1532 Battle of Cajamarca. By using traces of black and different shades of red, he hints at the violent encounter between the Incas and the Spanish colonial forces that ultimately brought down the largest empire in pre-Columbian history.

In the future, some of Szyszlo’s paintings, like the triptych “Paracas Landscape,” will return to their home in Peru to keep the memory of the painter alive. Others, like “Cajamarca,” will travel the world as part of an ongoing effort to introduce other audiences to his pioneering work.

Meanwhile, back in Washington, D.C., the AMA continues its own work to draw attention to artists from the Americas through its regular exhibits, including two recent shows that reflected on the historical and cultural legacy of Latin and Caribbean art through a comprehensive catalogue of the AMA’s permanent collection that debuted in 2017.

That ever-growing collection is mostly due to the donations of foreign governments — such as a recent contribution from the Canadian government — but is also thanks to individual contributions and the artists whose work continues to define the region and keep the AMA’s mission relevant for future generations.

Chiara Vercellone is an editorial intern for The Washington Diplomat.