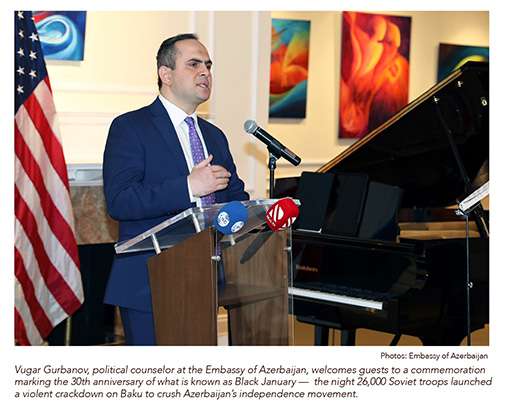 This article is paid sponsored content that appeared as an advertorial in the April 2020 issue of The Washington Diplomat.

Azerbaijan recently marked the 30th anniversary of one of the saddest episodes in its history — Jan. 20, 1990 — the night 26,000 Soviet troops rumbled into Baku and attempted, but failed, to crush the country’s dream of independence.

In downtown Baku, the Alley of Martyrs — located on a hill overlooking the Caspian Sea — stands as a solemn reminder to the 147 people killed and 744 injured in what has come to be known as “Black January.” It’s common for citizens to place flowers on the graves of the fallen, and each year precisely at noon, the country observes a minute of silence accompanied by the horns of cars and passenger trains as well as ships in the Bay of Baku.

In Washington, D.C., this year, the Embassy of Azerbaijan remembered the tragedy with an event at the Women’s National Democratic Club. About 100 ambass­adors, dignitaries, jour­nalists and members of the public listened intently as the embassy’s political counselor, Vugar Gurbanov, explained how the massacre, ordered by Soviet President Mikhail Gorbachev, ended up triggering the end of the embattled Soviet Union itself.

“This operation against the people of Azerbaijan backfired. Soviet rule lost its moral ground for legitimacy, and after that tragedy, our determination to regain our independence got even stronger,” Gurbanov said. “I would make this bold statement that the struggle and sacrifices made by our people enormously contributed to the collapse of Soviet communism.”

Comparing Moscow’s military operation against his country to the Soviet invasion of Hungary in 1956 and its crushing of the 1968 Prague Spring in Czechoslovakia, Gurbanov said there was no justification for any of these actions.

The Soviet invasion of Baku was triggered by an earlier decision by the Supreme Soviet of the Armenian SSR to include the Nagorno-Karabakh region of Azerbaijan in its budget and allow its residents to vote in Armenian elections — infuriating Azerbaijani citizens. Soviet troops entered Baku to supposedly restore order, after having destroyed the central TV station and cut all phone and radio lines, but then began attacking unarmed protesters and firing into crowds. On the third day, more than 2 million Azerbaijanis came to bury their dead.

“The 20th of January reminds us of our duty to stand for the independence and sovereignty of the Republic of Azerbaijan,” Gurbanov said. “I would like to thank our colleagues from other former Soviet republics — and especially our Ukrainian, Georgian and Estonian colleagues who are present here. Over the last 50 years, we have all shared similar tragedies.”

“I don’t want to minimize the suffering, but this event marked a hugely important end and an equally important beginning — and that’s why it deserves to be memorialized not just in Azerbaijan, but on a global scale,” said Starr, who’s also distinguished fellow for Eurasia at the American Foreign Policy Council.

According to Starr, the 1990 uprising had its roots in the early Soviet anti-religious campaigns of the 1920s and, later on, Moscow’s attempts to destroy Azerbaijani identity.

In 1976, Heydar Aliyev was appointed a non-voting member of the Soviet Politburo and a full member six years later. He became first deputy chairman of the Council of Ministers — the highest position ever attained by an Azerbaijani in the USSR. The undisputed leader of Azerbaijan, Aliyev was nevertheless forced to resign from this position in 1987 by Gorbachev. Meanwhile, unrest was intensifying not only in Azerbaijan, but also in Georgia, Ukraine, Kazakhstan and various other Central Asian republics.

“Brezhnev kind of made a deal with each republic,” said Starr, referring to former Soviet leader Leonid Brezhnev, who served as general secretary of Communist Party from 1964 until his death in 1982. “He said, ‘You’ll give us what we need, and we’ll lay off. In Central Asia, it became virtually a sovereign state, except it didn’t have its own foreign policy or army. The leaders of those various republics under Brezhnev used this opportunity to advance their cause. But with the appointment of Gorbachev, this deal fell apart. He was absolutely out to get those national leaders who had taken advantage of the deal.”

After the events of Black January, Aliyev returned to Azerbaijan. By December 1991, the Soviet Union itself had ceased to exist, and Azerbaijan had formally declared its independence. In October 1993, Aliyev was elected president; he ruled until his shortly before his death 10 years later, having appointed his son, Ilham, as his party’s presidential candidate.

“In the end, all of the Soviet efforts to keep Azerbaijan under Soviet rule proved worthless,” wrote Radio Free Europe/Radio Liberty correspondent Katarina Hall. “The Soviet Union’s attack on Baku had the opposite effect. Instead of suppressing dissidents and eliminating the independence movement, it further encouraged Azerbaijanis in their drive for freedom from communist rule.”

In an interesting footnote to history, in 1995, Gorbachev apologized to the people of Azerbaijan, stating that “the declaration of a state emergency in Baku was the biggest mistake of my political career.”

It also marked, as much as any single event, the rebirth of an independent Azerbaijan.

“I see guests here from other countries that weren’t even found on the map then,” Gurbanov said in thanking all for their attendance. “Yes, this was a terrible event in which good people suffered. But those of us who respect sovereignty, self-determination and open systems of government all have a reason to rejoice.”