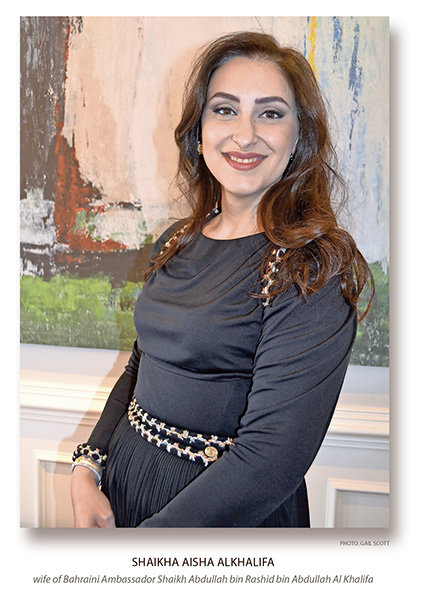 “Bahrain is a relatively small country with a big heart,” said Shaikha Aisha AlKhalifa, the wife of Bahraini Ambassador Shaikh Abdullah bin Rashid bin Abdullah Al Khalifa. “Although Bahrain was once called ‘the island of 1 million palm trees,’ today many of those palm trees have been replaced with skyscrapers and retail outlets…. The big misconception is that we are only desert, palm trees and camels.”

Despite Bahrain’s rapid development as a modern, cosmopolitan hub in the Arab world, AlKhalifa is occasionally nostalgic about the kingdom’s past and doesn’t want its cultural traditions to be overshadowed by Western imports, such as a mall that recently opened with familiar brands such as the Cheesecake Factory, Dominos, McDonald’s, Victoria’s Secret and the GAP.

Yet elements of the past are still preserved. Despite the collapse of Bahrain’s famed pearl industry, “we have the best pearls,” AlKhalifa said with a smile. “They are natural and not cultured. You can tell the difference by the size.”

And with change has come many welcome new additions. “We are the first country in the region to host the Formula 1 Grand Prix, which is one of the biggest annual attractions,” she noted.

But the most important change, she says, is the tiny island country’s evolution into a tolerant, stable constitutional monarchy with a thriving economy and close ties to the U.S.

The archipelago of islands, located just east of Saudi Arabia, has been a key trading crossroads for centuries. Pearl fisheries formed the basis of Bahrain’s wealth for many years until the early 20th century, when the pearl market collapsed and crude oil deposits were discovered. But Bahrain lacks the large oil reserves of its energy-rich neighbors, so since its independence in 1971, it has steadily worked to diversify its economy, becoming a leading regional banking center.

“Although we do have some natural resources [such as] oil and aluminum, now more than 80 percent of our GDP comes from the non-oil sector: banking, financial services and tourism, especially the big cruise ships,” AlKhalifa told us.

“We might have different local traditions when compared to the U.S., [but] our values are the same: equality in pay and work-oriented [people],” she added. “We have the oldest established banking industry and the freest economy in the Middle East and North Africa…. We have a culture of tolerance, promoting peaceful coexistence. Everyone can make their own choices.”

She noted that Bahraini women were the first in the region to receive an education in the 1920s, and were given the right to vote and run for office in the early 2000s.

AlKhalifa said she believes in “doing good through bringing people together. It is exciting not only to learn about others, but also to share my own [traditions]. Bahrain, an island in the trade routes connecting Asia to Africa and Europe, was always a melting pot since early civilization. It’s a small world in Bahrain. Everyone knows everyone else. Our homes in Bahrain have always been open to visitors,” she said. “The people are very friendly. We have a big mix of expats and different religions.”

Politically, Bahrain is also relatively open compared to many of its neighbors, with an elected legislative assembly, although the country has been ruled by the Al Khalifa family since 1783. The constitutional monarchy, led by a Sunni minority, also struggles to manage its relations with the country’s much larger Shiite population.

Those tensions exploded in early 2011 during the Arab Spring uprisings, as Bahrain’s Shiites demanded greater political representation and rights. The government, aided by troops from Saudi Arabia and the UAE, cracked down on the protests, which eventually died down. While some efforts were made at political reconciliation, frustrations among the country’s Shiite still fester, and the government has been accused by human rights groups of stifling dissent by jailing activists and opposition leaders.

Bahrain also walks a fine line in balancing relations with its larger neighbors, namely Saudi Arabia, its Sunni ally. It is the third-smallest country in Asia after the Maldives and Singapore, with a population of just 1.4 million, including many expats and migrant workers. Last year, it joined Saudi Arabia and the UAE to launch a blockade against Qatar for its alleged ties to terrorist groups and relations with Iran, Saudi Arabia’s Shiite rival. The U.S. has tried, unsuccessfully so far, to mediate the crisis among its Gulf allies.

Despite the current schism with Qatar and ongoing accusations of Bahrain’s marginalization of its Shiite majority, the U.S. has generally backed Bahrain, home to the U.S. Navy’s 5th Fleet, which carries out missions throughout the region.

Not only is Bahrain home to the critical naval base, “we have had a free trade agreement with the U.S. since 2006, and we have new legislation which allows foreigners to become 100 percent owners of any company they wish to establish, which could be done online today,” AlKhalifa pointed out.

She added that “we have lived among Americans for many decades.” Bahrain’s relationship with the United States started in the late 1800s on a people-to-people level. “Missionaries from Minnesota, the state my mother was from, visited Bahrain and ended up establishing the American Mission Hospital, which is still functioning today and expanding into other locations on the island.”

AlKhalifa’s ties to the U.S. are personal. Her mother, who died when AlKhalifa was just 1 year old, was an American. Growing up with her grandmother on her mother’s side, who was Bahraini, was “a great experience,” she said. Mama Lulwa, as she was known, “was a blessing to me. She was one of the Bahrain’s greatest women’s advocates; in her house, entertaining was part of the furniture.”

AlKhalifa’s grandmother was involved in many voluntary activities, which resulted in the establishment of the Mother and Child’s Welfare Society in 1960. AlKhalifa said this experience gave her a deep appreciation of how women’s empowerment is essential for community development. She said she is planning to continue Mama Lulwa’s focus on women’s empowerment and helping orphans. 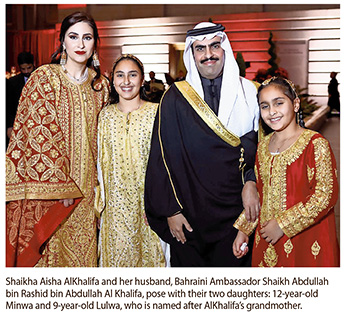 In high school, AlKhalifa was a member of the journalism club and had a passion for the arts that led her to continue her studies abroad. She earned her bachelor’s degree from Boston’s Massachusetts College of Art and Design. That’s where she met her husband. “All our cousins were in Boston. A mutual relative introduced us. We were both 18,” she recalled.

“We come from the same big family. I always knew of him” she said, noting that marrying a distant relative is not uncommon in Bahrain. “In college, we grew close together since we both went to school in the same city, a year apart.”

The ambassador has two master’s degrees, one in management and the second in business administration. He is currently working on a Ph.D. from the International School of Management based in Paris. “I knew he was intelligent, smart and would be devoted to his work,” AlKhalifa said.

Today, their own family is quite large. They have two girls, both of whom attend the British School of Washington: 12-year-old Minwa and 9-year-old Lulwa, who is named after AlKhalifa’s grandmother. “The name means pearl,” she noted.

The big surprise came when AlKhalifa was pregnant again — with triplets. “I was huge and we have twins in the family but we didn’t expect triplets,” she said. “I had 14 hours of labor, then a C-section with the same doctor who delivered the girls. My husband was with me the whole time. The three boys are 20 months old now.”

The final family members are Sahara and Sultana, two golden retrievers who are also twins. “We got them when they were puppies,” she said.

“My husband was afraid to tell me when he found out he was going to the United States as ambassador. It was a big surprise. I had just had the boys and they were only six months old.”

Today, the busy mother loves spending time with her children but has found ways to carve out relaxation time for herself. “I do deep breathing, Pilates and take long walks on my own. Sometimes my husband and I go to work out together. It’s nice because no one recognizes us.” And if there is any time left, she loves to watch “vintage movies” and go shopping.

Art, of course, is also important to her. She still paints and wants to set up her own private art gallery at the residence, where paintings by some of Bahrain’s top artists will be exhibited.

One of the reasons she likes Washington is “the vibrant arts and culture scene with museums and galleries on every corner. It is a small city … but larger than Boston, where we both went to school,” she said.

“The U.S. in itself is such a large and fascinating country. Each state has its own traits and exploring the not-so-obvious regions of the U.S. is what I look forward to, and we can’t forget Disneyland!”

Although she is here with her husband and children and has help, she said that “being away from family and friends can sometimes be hard. Then there is the adaptation to change, letting go and, most of all, the uncertainty.”

“My family comes with a lot of baggage — plus we have to move the girls to new schools. The boys speak mostly Arabic and have less exposure to their own history and culture. Once one has established him or herself in a place and started to get comfortable, it might be time to go. People in the diplomatic corps are uncertain of when the time will be up or if there is any political decision that might affect their presence,” she said.

“I think ambassadors’ spouses should be recognized as co-ambassadors because they are at every event, spending as much effort, time and energy as the ambassador, if not more in some cases,” she added. But AlKhalifa said she relishes her primary job, which is the “promotion of Bahrain in the best possible light and exposing as many people as I can to my culture.”