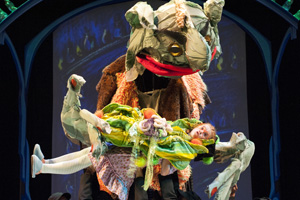 With its exquisite puppetry, sweet fairytales and, yes, potty humor (this is a play for youngsters after all), “The BFG (Big Friendly Giant)” at Imagination Stage, downtown Bethesda’s sleek home for children’s theater, is sure to entertain the entire family.

British author Roald Dahl (who wrote “James and the Giant Peach,” “Matilda” and “Charlie and the Chocolate Factory”) wrote the imaginative script, which David Wood adapted for the stage. “The BFG” shows children that not all giants are scary, even outcasts are special, and kids should always follow their dreams. But as heavy-handed as these maxims are, this production makes sure to serve them up with inventiveness, suspenseful plot twists and wit.

Set in England, “The BFG” tells the story of how Sophie, an unhappy orphan, gets plucked from her bed by the world’s only benevolent giant and then helps him battle all other giants who gobble up humans. Sophie is the ultimate multitasker, since she does all this while narrating the story.

This production is a visual delight. Giant Country, the home of the giants where Sophie gets whisked off to, comes alive through Eric J. Van Wyk’s vibrant, colorful set and large-scale puppets (the BFG himself stands a daunting 12 feet tall). In Van Wyk’s words, the BFG “is more like a sculpture” connected to a backpack worn by actor James Konicek, the voice of the BFG.

At the start of the play, young audience members might be alarmed by the BFG’s massive shadow (skeleton hands, large beak and elephant ears), but those fears soften when the gentle giant appears with his sloping gait, comforting demeanor and made-up vocabulary and grammar. “I is hungry,” he announces to the world.

The BFG uses his imposing features for the good of mankind and is at once adored. His Goliath ears allow him to hear dreams and detect their contents — the good ones he blows into children’s bedrooms and the nightmares he detonates or uses to start fights with nasty giants. With his massive, movable jaw, he confides to Sophie, the unwanted urchin, his similar isolation in his quest to save “youngins” from harm’s way. 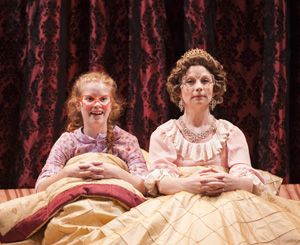 Sophie enlists the help of the Queen of England (Susan Lynskey, right) to help capture the giants so they won’t eat more people.

What’s more, we discover that not only is he the only giant who doesn’t eat children, but the BFG also eats funny-sounding foods like the foul vegetable snozzcumber (obviously related to the cucumber) and washes it down with frobscottle, an unusual drink infamous for causing noisy, rather exciting whizzpopping (flatulence). When Sophie protests, her new best friend retorts that if everyone is doing it (passing gas), why not talk about it? Sophie, after trying it out, agrees that whizzpopping is glorioumptious.

Another big appeal of the BFG is that he talks funny — something young children do all the time. Or as he puts it, “What I say and what I mean are two different things.” “Am I right or am I left?” he often asks. To which Sophie answers, “You’re right.”

The BFG’s nemeses and Sophie’s new enemies are the human-eating giants, who are far less loquacious but still entertaining. The oversized, hairy, gruff rogues — who spontaneously break out into benign line dancing when excited — resemble vast cookie monsters.

Megan Graves, no stranger to Imagination Stage (she performed in “Inside Out” and “The Magic Finger”) portrays the vulnerable but spunky Sophie. Already diminutive in stature, she is a comical and precious sight in her flannel pajamas, pigtails and glasses alongside her overgrown caretaker and partner-in-crime.

In their quest to beat out the evil giants, Sophie and the BFG approach the pinch-faced Queen of England, portrayed by Susan Lynskey, to persuade her to help capture the giants so they won’t eat more people. A charmingly droll scene ensues that begins with the BFG blowing a nightmare into the queen’s ear while she sleeps to alert her of the problem and ends with the evil giants captured and forced to eat snozzcumbers as penance. 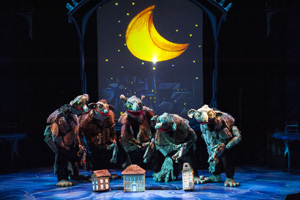 “The BFG” is a delightful play, sure to entertain both children and adults.

Co-directors Van Wyk and Kathryn Chase Bryer add frequent amusing touches to an already lovable script. The evil giants doing the “Hokey Pokey” while gobbling up villagers and the queen identifying herself with her signature hand-cupped wave are two examples of well-placed shtick. Perhaps the lighthearted additions are to make up for Roald Dahl’s controversial reputation for writing dark-humored, gruesome fiction where innocent children exact revenge on cruel adults. “Nastiness was payback…. Beastly people must be punished,” the renowned children’s book author once said.

Dahl, though, understood his audience. While adult chaperones may cringe as Sophie and the BFG delightfully “break wind” all over the stage, children in attendance squeal with delight. In other words, he writes for children, who enjoy his fantasies of redemption.

One thing is certain. In our technology-driven world where texting starts early and children talk and write in acronyms, “The BFG” might just become a household name (LOL).