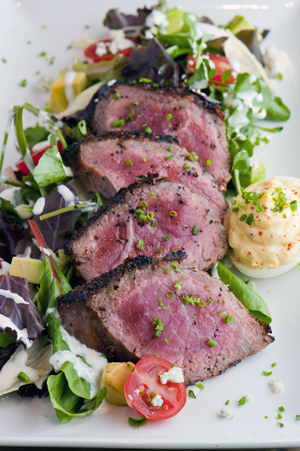 The steakhouse salad is one of the many hearty dishes at the new Del Frisco’s Grille in Maryland.

A few months ago, the Texas-based Del Frisco’s Restaurant Group continued its national expansion by opening the second of its Del Frisco’s Grilles in the area, and the first in Maryland, joining the group’s other concept restaurants, Double Eagle Steak House and Sullivan’s.

Double Eagle, in fact, recently opened a steakhouse in the massive CityCenterDC luxury complex in downtown D.C. Likewise, Del Frisco’s Grille opened in a large new development project that’s also trying to modernize and transform the face of its respective neighborhood — this one in a part of Maryland long dominated by big box stores and drab strip malls.

The new Del Frisco’s is the first commercial tenant to open in Pike & Rose, one of those huge mixed-use complexes that are springing up along Rockville Pike, in what promoters call the “repikealization” of the area.

Del Frisco’s is big, Texas style, with a total seating capacity of 250, including 27 at the bar and 54 outside seats. The design theme, a play on urban industrial, is handsome and understated with gray walls, rich wood architectural features, polished concrete floors and accents of red in the seating, lighting and scant carpeting. When crowded, the design fades into the background, but early in the evening, it easier to appreciate what the designers have done with the space.

Del Frisco’s went with a local talent, Cody Lynch, as executive chef at the new location. It was a good choice. Lynch is an advocate of the fresh and locally sourced approach to cooking, so much so that at another restaurant he grew the produce himself. While a difficult thing to do at high-volume restaurants like Del Frisco’s and McCormick & Schmick’s in Crystal City, Va., where he worked most recently, the underlying principle remains the same.

As a native of southern Maryland, Lynch knows his way around seafood and it shows in his crab cakes. Meaty and paired with Cajun lobster sauce for a bit of kick, they are nice as a starter or as a main course, or in sliders with Old Bay tartar sauce. He also knows his way around local ingredients. For the oysters on the half shell, Lynch uses Cherrystone Aqua-Farms oysters from the venerable Ballard Fish & Oyster Company in Cheriton, Va. The oysters are sustainably raised in the waters off the southern Delmarva Peninsula that have yielded both the renowned ocean-side super-salty “old salts” from Chincoteague, and the milder Chesapeake Bay-side oysters. Lynch’s presentation at Del Frisco’s is classic with a sharp, tomato-filled cocktail and mouth-puckering mignonette sauces.

An equally memorable small plate, the Buffalo-style grit cakes, begins with grits from Byrd Mill. Located on the South Anna River in Ashland, Va., the mill has been in operation since 1740. Puck-shaped cakes of coarse ground white corn are fried and topped with avocado ranch dressing, blue cheese crumbles, spicy buffalo sauce and micro celery. They are a whimsical turn on a bar food classic and are a great way for meat avoiders to experience the pleasure that is the Buffalo wing.

The crispy tacos of ahi tuna tartare and avocado slices topped with spicy citrus mayo, a Del Frisco’s signature dish, is refreshingly light, but tasty Meyer lemon vinaigrette and parmesan-black pepper aioli are not enough to save the fire-roasted artichoke from mediocrity. 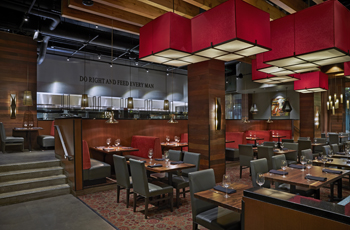 Del Frisco’s menu offers a variety of casual fare. Chewy, thin-crusted flatbreads with several nice topping combinations — including a simple roasted tomato, fresh mozzarella and basil version; pesto chicken; wild mushroom; or pepperoni and sausage — are large enough as a meal, but also share well. Del Frisco’s is one of the few places around that does a Greek-style burger with lamb instead of beef, and they do it well. Served with roasted tomato, arugula and tzatziki sauce, it is an interesting alternative to the traditional burger.

Chef Lynch works his way through the rest of the menu with a combination of more formal signature dishes and preparations unique to this Del Frisco’s, displaying equal skill with myriad dishes. Domestic and ethnic comfort foods such as meatloaf, roast chicken, Alfredo pasta and beef stroganoff are solid dishes (though the preparations have not been entirely consistent over several visits), but the fish choices have been the most interesting. The sole Francese, pan-seared in chive-lemon butter, topped with lump crab and accented with an arugula-cherry tomato salad, another Del Frisco’s staple, is pleasingly mild.

As part of a steak-dominated brand, the Grille offers steak in several guises. The meat is always well prepared, whether it’s one of several cuts served a la carte, in a packed steak sandwich or on a big steakhouse salad — a hearty combination of broiled prime sliced steak, deviled egg, baby mixed greens, avocado, bacon, parmesan, blue cheese and lemon-horseradish dressing.

Several other salads are worthy of note and are a good value. An interesting kale and Brussels sprouts salad with roasted Marcona almonds, dried cranberries, orange segments and shaved Manchego cheese, dressed in a Creole mustard vinaigrette, is an excellent meatless choice. The seared Asian tuna salad with Napa cabbage, arugula, mango, chilled noodles, peanuts, almonds, tomato, avocado and a ginger-sesame dressing, while a bit cliché, is satisfying. 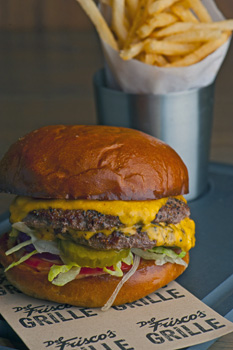 Del Frisco’s Grille combines classics such as its prime cheeseburger with an emphasis on fresh, locally sourced ingredients.

The large bar is central to Del Frisco’s design theme, and libations from that quarter are a key part of the concept. The drink menu features signature cocktails, a short wine and beer list and off-menu specials. The VIP, a pineapple and vodka concoction, and the Morning After — Pearl Coconut Vodka, coconut water, fresh lemon sour and a splash of Sprite — are representative of the mostly sweet house specialty cocktails. A refreshing white sangria of pinot grigio, white peach purée, Peach Schnapps and fresh berries is somewhat diminished by excess ice. Some of the best things come in tiny packages on the cocktail menu. The Plum Drop is a blissful thimbleful of Pearl Plum Vodka, Triple Sec and fresh lemon sour.

Desserts include an unusual lemon Doberge cake. A traditional New Orleans dessert that was developed from the Hungarian Dobos torte, the Doberge’s finely crumbed layers are separated by pudding and iced with lemon butter-cream icing and lemon glaze. It is a Texas-size slice that is perfect for sharing. Another nice choice, the Nutella bread pudding, though slightly dry, is served with coffee ice cream and caramel sauce.

The restaurant’s service has come in for some criticism since it opened. Wait staff have be instructed to interact with guests in a manner that some have found insincere. That, coupled with revealing costumes and an apparent unwillingness to address the complaints of patrons directly, suggest management may not fully understand the market they are in. Though in several visits we have not observed these particular concerns, we have noticed a problem with timing. Both the sole and the paparadelle Bolognese seemed to have been sitting under a heat lamp for some time, and staff repeatedly tried to remove plates before we were finished. These may simply be opening glitches, but they may also be symptomatic of a high-volume chain restaurant where rapid table turnover is part of the business model. Only time will tell.

But there is much to recommend in this new addition to an evolving Rockville Pike. The food and drinks are good, and the space is attractive. Parking is easily accessible and a new high-end movie theater experience is just steps away at iPic. It is, however, a large commercial chain establishment with all that brings. It seems well suited to its place in the Pike & Rose complex, sharing its ethos. Whether that particular formula appeals to diners is largely a matter of taste.