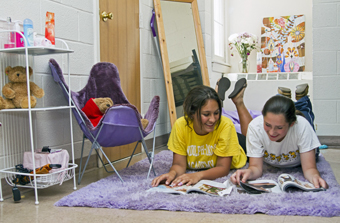 Bustling lives in Washington are the norm for diplomatic families. And when both spouses are professionally engaged, it can be difficult to carve out time to help with their child’s education.

Diplomatic tenure in the nation’s capital also often coincides with high school years, a critically important period for teens when they seek independence with one hand while holding onto a parent’s coattails with the other.

Boarding high schools can be a good option for busy parents and teens seeking a more immersive learning experience. Boarding schools, where students study and live with their fellow classmates during the school year, are more typically associated with other nations such as Britain. But an elite niche of boarding schools exists in the Washington area, and although less well known than private day schools, they are no less popular among families that choose them.

Boarding schools are often home to close-knit societies focused on and dedicated exclusively to the academic and emotional well being of your teenager. But the decision to commit to a boarding school is a major one. So The Diplomat decided to take a look at some of the benefits of boarding.

“For families that have very chaotic lives — both parents have careers, they work late at night — students may not get the family connection they should,” said Amy Harriman, director of admissions and financial aid at Randolph-Macon Academy in Front Royal, Va. “A boarding environment can be the ideal answer for these children because it provides structure and supervision day and night.”

Boarding schools offer access to learning opportunities around the clock because teachers and advisors are on site all the time. For example, at Episcopal High School in Alexandria, Va., 90 percent of the teachers live on campus.

“A student may very well sit next to the science teacher at dinner with whom they had a class earlier that day,” said Leslie Lichtenberg, director of communications and public relations at St. Timothy’s School in Stevenson, Md.

“When you study, learn, live, eat and play with your teachers, you get to know them on a whole other level,” said Gina Finn, director of admissions and financial aid at Foxcroft School in Middleburg, Va. 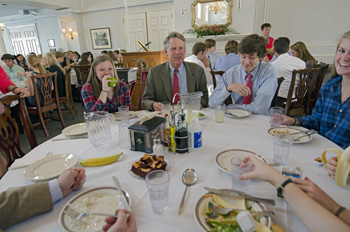 Headmaster Rob Hershey sits among boarding students during lunch at Episcopal High School in Alexandria, Va., where 90 percent of the teachers live on campus.

“It’s really pretty spectacular to see your teacher not just as a teacher but also as a coach, dorm parent, taking you to a dance on the weekend,” she said. The result is that the child “develops a very healthy relationship with adults.”

“Students get living and learning experience and exposure to teachers, coaches, advisers and mentors 24 hours per day,” said Lichtenberg, noting that these relationships could be beneficial in many ways.

Close proximity and ready access to, say, the art teacher, can lead to help putting together a portfolio or simply make it easier for the child to ask for extra help.

A boarding school community is highly structured, 24 hours a day, seven days a week. This means the logistics of moving from one activity to the next are seamless. Students go from dormitory to dining hall to class and later in the day to sports, free time, study hall and finally to bed.

“We provide lots of structure, which keeps them busy. It’s a full day every day,” said Brian Gilbert, dean of admissions at Georgetown Preparatory School in Bethesda, Md.

“There’s no getting into the car. No waste of precious time commuting,” added Finn. “The student’s day is all about them and what they need to be doing.”

Boarding is also a convenience factor for athletics and art programs. Parents don’t have to worry about transition time between classes, games, dinner and homework.

There are also many weekend activities for students who don’t go home. “In my freshman year I went home most weekends because I wanted to see my parents and because I missed my two brothers so much,” said Nora Canellakis, now a sophomore at the Madeira School in McLean, Va.

“But many weekends I regretted not being at school because there were lots of activities, hanging out with the other girls and bonding,” she said.

“Boarding really creates a bond in the dorm and among others on the campus,” said Abrams. “They get to see things day students don’t see because they’re there all the time. Teachers invite them to their houses, make dinner, make a bonfire.” 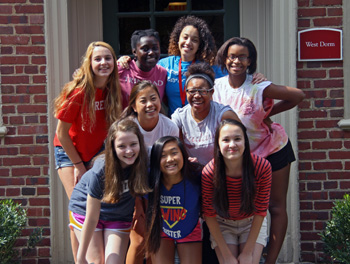 Sophomores at Madeira School in McLean, Va., on a recent afternoon pose in front of West Dorm, where most of them live. Bottom row from left are Grace Kennedy, Grace Huang and Grace Lee; middle row from left are Jackie Tidd and Monet Umana; and top row from left are Nora Canellakis, Oyin Adenekan, Azalyn Gonzalez and Meagan Lane.

“High school is difficult any time, said Lichtenberg, so to have the constant support and presence of faculty is invaluable.

Besides academics, high school is also about gaining life skills and learning how to manage independence, said Gilbert.

“I wanted to live on my own,” said Canellakis, who is 15 and a D.C. resident, of her interest in attending boarding school. “I wanted to learn to be independent, start the growing-up process and get a jumpstart on college.”

Finn said students grow and become independent together. “It’s really a unique experience,” she said. “We find that when they go off to college they’re so much better prepared and tend to adjust more quickly because they’ve had this boarding opportunity.”

“We have to self-regulate our schedule,” said Canellakis. “My dad used to come in every morning and say, ‘Rise and shine.’ Here I have to manage my own time and get my work done. Time management is a skill you learn at boarding school because you’re on your own doing it all instead of someone telling you what to do.

“If you’re given a paper a week in advance, you have to organize your time to get it done. You use a planner or a calendar, look at all your classes, and figure it out,” she said.

Students are also taught to advocate for themselves, ask questions, be proactive and make appointments to see their teachers, said Hart Roper, director of admissions and financial aid at St. Albans School in D.C. “We see this as a path to future success.”

Friendships made in boarding schools can last long after high school is over. “When you live with your friends the intensity is deeper,” said Finn. “These are the girls who’ll be at their weddings and the godmothers of their children.”

Putting Students,
And Parents at Ease

All boarding schools have established programs that pair an incoming student with a veteran. At Madeira it’s called S.W.I.N.G. — Students Welcoming In New Girls. At St. Timothy’s it’s called Old-Girl-New Girl. At Randolph-Macon it’s Big Brother-Big Sister. The idea is the same — to lend a guiding hand to the new girl or boy and welcome them into their new home.

Perhaps best of all, at least from a parental perspective, is that boarding schools hold the reins of authority and teach discipline, deciding (and enforcing) curfews and study time, for example.

These are the requisite demands teens at boarding schools must accept. When they come from teachers, some of the tension between parents and children is eliminated. 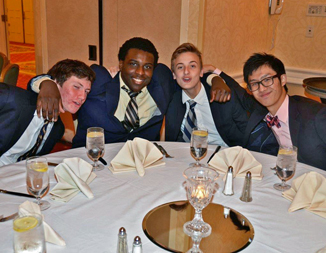 “It takes the bad guy role away from parents and puts it on the shoulders of teachers,” said Harriman. “Teenage behaviors that parents usually put the kibosh on are in teacher’s hands, which means parents totally turn into the good guys.”

Boarding school is of course not an option for everyone. Cost is one obvious consideration — annual tuition at some of the nation’s most elite schools (including St. Albans, Madeira and Georgetown Prep) can run more than $50,000, more than many colleges and universities. Admissions can also be highly competitive.

Above all, it has to be the right fit for the student.

“Don’t send a child to boarding school if he isn’t committed to being there. All kids are a little nervous about leaving home, but they should nevertheless be invested and engaged in the process,” recommended Scott Conklin, director of admissions at Episcopal High School.

Kids who go to sleep-away camp and love it are usually perfectly suited to boarding. And if boarding is in the family history and parents treasure their memories that will positively affect their kid’s comfort levels, said Finn.

Look around at all options. “When you visit, it’s your gut feeling that’s important. The thing that feels right is right,” she said.

“There are a lot of different roads to success in boarding schools that parents can find,” said Roper.

Ideally, the whole family will reach a consensus on the child’s school choice. Canellakis summed up the optimum path. “In the end, it was a communal decision between me and my parents,” she said.

The biggest challenge is when ninth graders arrive without knowing anyone and are leaving home for the first time. But Lichtenberg says both parents and children should rest assured, because “it will be only a matter of weeks before they get their wings and learn to fly.”