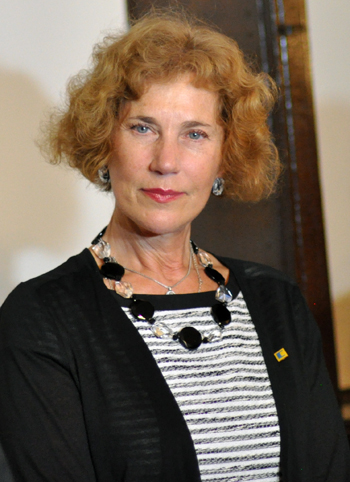 Elena Poptodorova performed her first assignment as Bulgaria’s ambassador to the United States so well that her government asked her to return for an encore.

Poptodorova was Bulgaria’s envoy to the U.S. from 2002 until 2008, a critical time for both countries that saw the American invasion of Iraq and the accession of Bulgaria to both the European Union and NATO. In 2008, Poptodorova returned home to take on the challenging job of ambassador-at-large for the Black Sea region, which includes Bulgaria, Georgia, Romania, Russia, Turkey and Ukraine. She also served as head of the Security Policy Directorate at the Ministry of Foreign Affairs for one year.

But in 2010, Poptodorova’s successor in Washington, Latchezar Petkov, was forced to resign in a political scandal that erupted when absentee ballots delivered to the Bulgarian Embassy from Bulgarians in the United States went missing in the country’s parliamentary elections. Petkov lost his job and soon Poptodorova was on her way back to Washington.

An eloquent, amiable and left-leaning former member of the Bulgarian Parliament, Poptodorova arrived in Washington in 2010 and she has provided a steady hand for her country’s relationship with the United States in the six years since. She returned to Bulgaria in late May and President Rosen Plevneliev has appointed his foreign policy secretary, Tihomir Stoychev, to replace Poptodorova in Washington.

In a wide-ranging Diplomat interview at the Bulgarian Embassy near Dupont Circle, Poptodorova discussed her two tenures in Washington, the importance of Bulgaria’s NATO membership, what it’s like to be a woman ambassador in Washington and much more. Poptodorova said her first stint as Bulgaria’s ambassador was more consequential than the second one, largely because the stakes were higher.

“That was probably the most intense period in bilateral relations, and also in transatlantic and European-U.S. relations,” Poptodorova said. “That was the time that NATO enlargement happened.”

Membership in NATO, the international military alliance that consists of 28 member states from North America and Europe, had been a priority for the Bulgarian government since the fall of the Soviet Union. Bulgaria joined NATO’s Partnership for Peace in 1994 and a decade later it joined six other former Soviet states in a major NATO expansion in 2004 that infuriated Russia. The country is now working toward NATO compatibility in communications and training, and has established a peacekeeping training center.

“That was the most important and most visible event that happened,” Poptodorova said, recalling her intense lobbying efforts to shore up political support for Bulgaria’s membership with U.S. lawmakers on Capitol Hill.

“Bulgaria and Romania were not seen as obvious prospective members of NATO so we really had to exert double and triple effort to convince the House members and the senators,” she said. “We had a big map on the wall with all 435 [House members] plus 100 senators to lobby personally as many as we could.”

Then-Sen. Mary Landrieu (D-La.) agreed to speak with Poptodorova at the time, but only briefly.

“I was told she has one minute and a half while riding the [small underground] train” in the U.S. Capitol, the ambassador recalled with a laugh. “That was about enough. We rode on that little train and during the duration of the ride I very emphatically explained our position. It was a very serious effort and luckily it ended successfully.” 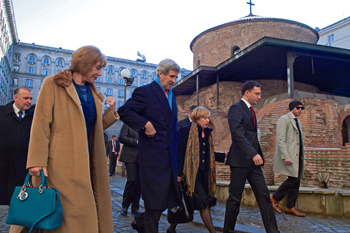 She said former Sen. John Warner (R-Va.), who was chairman of the Senate Armed Services Committee at the time, was a major skeptic of Bulgaria’s membership.

“My argument was that you need old Europe, you can’t have a partition or a split in this space,” she explained. “It was added security for the U.S., and the U.S. needs allies especially on a continent in which allies proved to be so important in the last century. I think that was logical … especially given the events and developments nowadays.”

She said the Russian invasion of Crimea and civil war in Ukraine have shown that allowing Bulgaria, Estonia, Latvia, Lithuania, Romania, Slovakia, Slovenia, Albania and Croatia to join NATO over the past decade was smart geostrategic policy.

“Events have only proven the importance of this transatlantic bond,” she said. “We have NATO guarding the southern borders of Europe with agency,” Poptodorova said. “The transatlantic space needs to be kept intact and well-protected. It’s not an infatuation or an obsession with a military alliance for it’s own sake; it’s what it personifies and what effect, or added value, it produces. It helps us enhance our own security and our own practical defense skills.

“Events since the annexation of Crimea have only proven that Bulgaria and Romania are key,” Poptodorova continued. “These same countries, which were viewed skeptically, now happen to be the outer border of the alliance and significantly so. It gets even more complicated because we do have a NATO ally — a NATO member — next to us, Turkey, but again we have different kind of complications because of the migrant crisis. Being part of NATO for Romania and Bulgaria [gives] an added importance to ourselves, to our region and to the United States.”

Bulgaria joined another globally important club — the European Union — in 2007 after signing an accession agreement in 2004. She said the support of the U.S. government in that quest was critical.

Critics of the enlargement say that admitting Romania and Bulgaria, two of the poorest and most corrupt members in the bloc, was a mistake. Both Balkan nations continue to struggle with the rule of law, judicial reform, endemic graft and organized crime.

On the flip side, being a member of the once-prestigious club has lost some of its luster, especially following the euro crisis and the recent influx of refugees arriving on Europe’s shores to escape war and poverty in countries like Syria and Afghanistan. So are the Bulgarian people satisfied with their country’s EU membership, which carries advantages and disadvantages?

“That’s a great question because it depends on how you ask it,” the ambassador said. “If you ask them, ‘Are you happy with the European Union?’ you may get double digits of unhappiness, but if you ask, ‘Do you want out of the European Union?’ then of course you have an overwhelming majority that want to stay.

“There is unhappiness with regard to the very complex process in Brussels that is mostly incomprehensible to an average citizen, but on the other hand, everybody in Bulgaria felt the benefit of the membership through the financial support which the country gets through the cohesion funds and different EU programs,” she added.

She also said that EU membership has required Bulgaria and other fledgling democracies to focus on good governance.

“What Brussels wants is for Bulgaria and any other member state to deliver on rule of law, transparency and efficiency, and these are all requirements that at the end of the day benefit the Bulgarians,” Poptodorova said.

Bulgaria also achieved a much higher visibility on Capitol Hill during Poptodorova’s tenure in Washington. Rep. Joe Wilson, a South Carolina Republican who is perhaps best known for shouting “you lie!” at President Barack Obama during his 2009 State of the Union speech, also created the House Bulgaria Caucus. The caucus has hosted members of Congress on fact-finding missions to Bulgaria and generally promoted U.S.-Bulgarian relations, with an emphasis on fighting terrorism. NATO and the U.S. military have hosted many joint military exercises with Bulgaria. 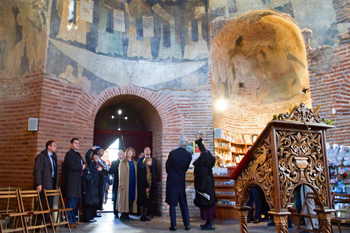 Ambassador of Bulgaria Elena Poptodorova and Secretary of State John Kerry admire the frescoes on St. George Church, an early Christian rotunda considered the oldest building in the Bulgarian capital of Sofia.

“For over 100 years, interrupted by tragic periods of totalitarianism, the United States has enjoyed diplomatic relations with Bulgaria,” Wilson says on the caucus website. “Bulgaria is a thriving democracy which recognizes the importance of furthering freedom throughout the world. By sending over 400 troops to Iraq to rebuild the country and train security forces, Bulgaria is playing an important role in helping the Iraqi people. Also with a contingent in Afghanistan, Bulgaria is a strategic ally that is helping to rebuild this nation and defeat terrorism.”

Turning the interview to more personal subjects, Poptodorova said she enjoyed being one of only about two dozen female ambassadors of about 180 in Washington. She said she always viewed being a woman as an asset in the world of diplomacy, not a liability.

“It helps because I think there is so much focus now placed on women and the higher visibility of women, so I believe there is this instinctive appreciation of a woman in these positions,” she said. “Empowerment of women is a big topic, a big thing. I never found it was a negative here.”

She also provided an update on her husband, Georgi Petrov, who suffered a brain stroke shortly before she took the ambassadorship in the early 2000s.

“He was half-paralyzed and had lost speech and comprehension,” she said. “It was not good at all but he has recovered to the extent possible. He’s autonomous now; the paralysis went away slowly. Our time [in the U.S.] impacted him positively. There still is a challenge and at the beginning it was frustrating, but I think he found a very receptive environment here. Everybody was so nice. People here try to help you.”

In closing, Poptodorova said the United States can always count on Bulgaria’s friendship.

“Different governments may have different measures of intensity of relations with the U.S. … but I am positive that there will be no Bulgarian government that will publicly or declaratively distance themselves from the U.S. or possibly shrink this relationship or damage it,” she said. “It is understood that relations with the United States matter tremendously, in the European context and the transatlantic context.”