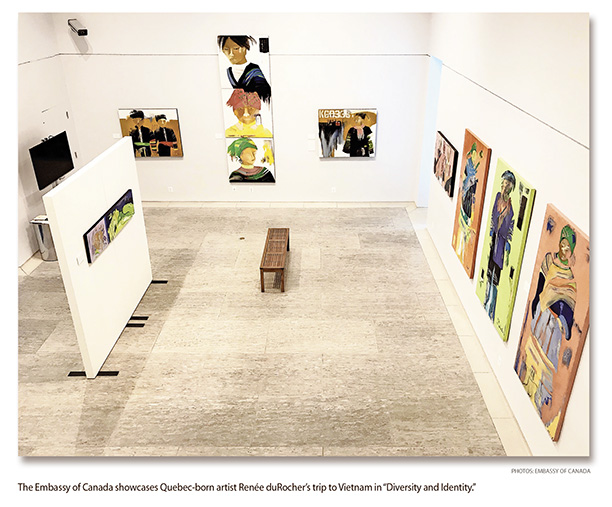 The aesthetically gorgeous, thought-provoking “Diversity and Identity” is an ode to Canadian artist Renée duRocher’s trip to Vietnam. It is both a vivid personal travelogue and a subtle meditation on our multicultural, interconnected world.

The vibrant colors pay tribute to an equally vibrant nation, as duRocher paints the Vietnamese rice fields, sumptuous tamarinds and traditionally dressed people she encountered on her journey. There are also literary parallels with duRocher’s visual essay, which was inspired by the writings of Vietnamese-born, Canadian-based author Kim Thùy, who selected poetic snapshots that duRocher incorporated into her work.

“For the past 20 years, my trips have become my muses. My inspiration comes from places visited while traveling in foreign countries,” DuRocher told us. “It is always something unexpected, like a temple or an archaeological site.”

While visiting Vietnam, duRocher said she was inspired by the beauty of the landscapes and the cultural pride in the communities she saw in north Vietnam.

Calling herself an artist of intuition, duRocher said she never knows what her paintings will look like. She usually begins on a large canvas or paper using a big brush and doing free, broad strokes of dripping colors.

“I explore at first the transparency of the color,” she said. “There is always a form or a color that inspires me and that is when the work really starts. My paintings are usually between abstract and figurative but they are always very colorful.” 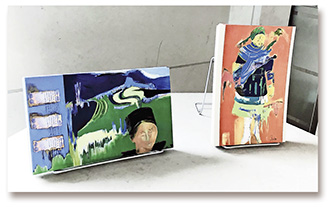 DuRocher names Matisse, Picasso and Francis Bacon as artists she admires. She likes their boldness and capacity to transform reality. She also enjoys the work of Canadian artist Jean Paul Lemieux, Mexico’s Frida Kahlo and Betty Goodwin of Quebec, which is where duRocher is from as well.

While Vietnam isn’t exactly the first country that one would associate with Canada, the two in fact share extensive links.

“From 1975 through 1992, Canada welcomed more than 100,000 refugees from Vietnam and the majority were migrants from the sea,” duRocher said.

As author Thùy pointed out, these Vietnamese immigrants and their descendants form an integral part of the larger Canadian community, enriching the cultural landscape.

DuRocher chose to name the exhibit “Diversity and Identity” for several reasons. She decided on diversity because “we are different in our culture,” and identity because “those cultural communities who live in the north of Vietnam wear their community costumes on a day-to-day basis.”

DuRocher said she was touched by people’s dedication to wearing those costumes as a way to preserve their identities in a rapidly globalizing society. “They live with very little, are friendly with each other and seem happy,” she said. “Particularly on a market day, it was very colorful and a unique experience. I have a very good visual memory and seeing everyone wearing traditional costumes was exciting and a visual treat for me.”

DuRocher also learned about various Vietnamese traditions, such as taking marriage photos one year before the actual ceremony, often done in famous gardens or in front of grand palaces. 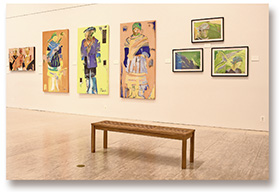 The exhibit includes “The Blue Mountains of Sapa,” which depicts a vast, lush landscape interspersed with the portrait of a young girl from the Hmong community, whose blue-tinted attire mirrors the hue of the mountains.

“Vietnam is a very green and luxurious country; in this painting I succeeded in transmitting that,” duRocher said.

DuRocher wants guests who visit her exhibit to understand that Vietnam is a land of mountains. Every inch is used to cultivate products like rice, pepper and tobacco. At the same time, she focuses on the people who inhabit this rugged landscape. She noted, for instance, that the majority of Vietnam’s residents are under 30 because older residents died in the Vietnam War.

As for upcoming projects, duRocher will have another exhibit in D.C. at the Zenith Gallery, which will open her show on Sept. 14. Later this fall, she will also have a show at St-Laurent + Hill in Ottawa.