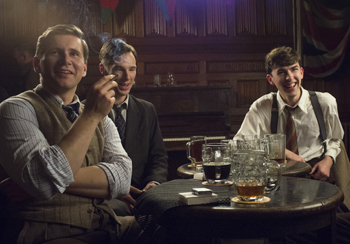 Also See: ‘Antarctica: A Year on Ice’ and ‘Diplomacy‘ and Repertory Notes

Thankfully, Norwegian director Morten Tyldum (“Headhunters”) utilizes brisk pacing to move the action along energetically in his first English-language film, avoiding the sad fate of many other British period pieces that are beautiful to see but feel rather stale and lack sufficient fresh air. In many ways an old-fashioned movie, “The Imitation Game” delivers an engaging classic narrative, this one interspersed with flashbacks. Screenwriter Graham Moore adapted his streamlined script from Andrew Hodges’s book “Alan Turing: The Enigma,” infusing some serious matters with plenty of levity.

During World War II, the eccentric math prodigy became an unlikely World War II hero — whose efforts were still closely guarded secrets post-war. The anti-social genius maneuvered his way into the position of leading a team of newly tapped code-breakers in Bletchley Park. Their highly classified mission aimed to decipher the notorious German Enigma code-making machine widely regarded as unbreakable, in a desperate attempt to keep the German military from winning the war. Against all odds, Turing succeeded by building a large, complex machine to calculate the Enigma’s numerous possible configurations in a finite period. He named his groundbreaking computer Christopher in honor of a beloved classmate who died as a schoolboy.

Fast forward to 1952, and the Manchester police respond to a break-in at math professor Turing’s home, who denied anything was stolen, raising their suspicions. The ensuing investigation leads to Turing’s conviction for gross indecency for committing homosexual acts. The court-ordered chemical castration wreaks havoc on his mind and body, causing him to commit suicide at the age of 41, an ignoble early end for one of the most influential minds of all time.

Tyldum and Moore maintain a generally upbeat tone by not digging too deep into the dirty details of Turing’s stressful life, so “The Imitation Game” often feels like a simplified highlight reel of his complicated existence. On the other hand, one could argue that glossing over the nitty gritty may have been a worthy sacrifice for a motion picture already nearing two hours. Despite its current running time, the movie does not feel too long, a fate that might have befallen it with a denser plot, even if that would have crafted a richer story. 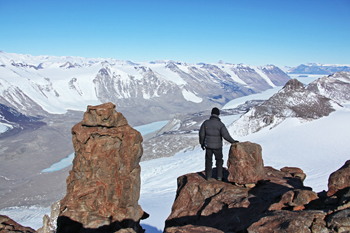 Kiwi filmmaker Anthony Powell’s stunning documentary “Antarctica: A Year on Ice” is the definition of a film with epic scale that is best seen on the big screen. Please do not wait to catch this on Netflix or cable if you can. The doc certainly benefits from some of the Earth’s most beautiful, stark scenery, including revealing time-lapse photography. Compared to the rest of the world, Antarctic images have only been sparingly captured by humankind, even after a growing body of documentaries and photography. Due to the seventh continent’s challenging remoteness and weather, its wilderness remains relatively unspoiled despite a surprisingly substantial presence of people.

“Antarctica: A Year on Ice” stands out by complementing the exceptional nature footage of landscapes and seals with a very humanistic story, co-written by Simon Price, that focuses on the intrepid semi-permanent human inhabitants of McMurdo and Scott Bases. The sites act as largely self-sufficient villages requiring workers with regular jobs going through their everyday routines to keep the bases operating. Powell arrived as a satellite telecommunications engineer.

Viewers see the tight-knit community celebrate Powell’s wedding to his bride Christine. Base residents enjoy activities such as holiday parties, Antarctica’s own music festival, Icestock, and the international 48 Hour Film Project, which facilitates a weekend of intense filmmaking by independent local filmmakers. Let’s face it, though. Despite the amenities, the bases are still very small and claustrophobic. The minority of women says of the men: “The odds are good, but the goods are odd.”

The sacrifices are much greater for the year-round residents of Antarctica, where the population peaks in the summer. Only a very select fraction, mostly researchers and scientists, dares to stay through the six-month winter’s extreme weather, which prohibits departures even for medical and family emergencies. After the winter residents endure months of dark isolation and 24-hour nights without sunlight, they often suffer from depression that unbalances their minds to varying degrees. The film shows them not knowing what to do when faced with the relative flood of newcomers in the spring.

Powell gained valuable experience shooting other documentaries in Antarctica. For “Antarctica: A Year on Ice,” Powell’s own first feature, he wore many hats as director-producer-writer-cinematographer, assisted by his wife Christine as second unit director. On screen, he demonstrates how he hacked his gear to tolerate the exceptionally brutal sub-zero conditions. He photographed the vast collection of footage for “Antarctica: A Year on Ice” over a period of what was actually 15 years living and working in Antarctica, including nine long winters. 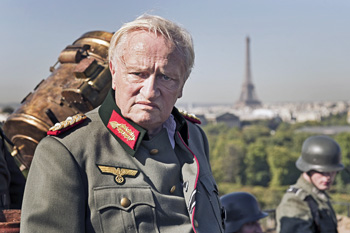 Master German director Volker Schlöndorff (“The Tin Drum,” “Death of a Salesman”) delivers another gem with “Diplomacy.” The skillful translation of French playwright Cyril Gely’s 2011 play averts a common trap of such stage-to-play adaptations, which frequently seem too stagy.

Gely’s play distills multiple-day historic events between two real-life figures into one fictional night. In the wee hours of Aug. 25, 1944, as the Allies close in on Nazi-occupied Paris, Swedish Consul General Raoul Nordling (André Dussollier) manages to sneak through a hidden tunnel into the German military headquarters in Paris. His goal is to convince German General Dietrich von Choltitz (Niels Arestrup), the commanding officer in charge of Greater Paris, to stand down on Hitler’s command that Paris can only be captured “as a field of rubble.” Nordling utilizes all his powers to save the beloved City of Lights and convince the general to abandon Hitler’s plans.

The bulk of the story’s indoor scenes are shot on location in the Hôtel Meurice, site of the actual German headquarters in Paris during World War II, which lends authenticity to the mise-en-scène of the predominant set. Schlöndorff’s gorgeous outdoor shots of the Parisian streets and the River Seine add a dose of cinematic scale. Meanwhile, French actors André Dussollier and Arestrup reprise their roles on stage to stunning effect.

The National Gallery of Art series “Athens Today” (Dec. 5-28) showcases six contemporary films by young Greek filmmakers addressing how the nation’s stressed economy challenges its people. It screens at the American University’s Malsi Doyle and Michael Forman Theater, presented with thanks to the Embassy of Greece, Hellenic Foundation for Culture, Greek Film Center, and the James and Theodore Pedas Family Foundation.

The retrospective “Also Like Life: The Films of Hou Hsiao-hsien,” reviews the work of the legendary Taiwanese director, continuing at the Freer Gallery of Art (through Dec. 21) and the Goethe-Institut (Dec. 4-13), the latter’s films programmed by the National Gallery of Art. The series was organized with the Ministry of Culture of the Republic of China, Taipei Cultural Center, Taiwan Film Institute and the Center for Moving Image Arts at Bard College.

The program “Animation Films about the Berlin Wall” (Mon., Dec. 8, 6:30 p.m.) screens as part of the event series “The Wall in Our Heads – Arts – Civil Society and Walls: American Perspectives” (through Dec. 15).