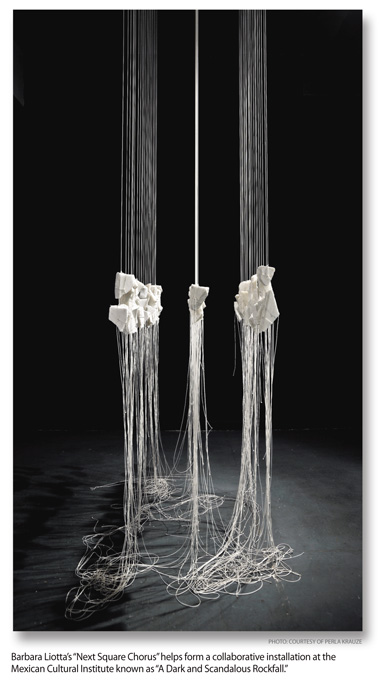 Given the dramatic state of U.S.-Mexico relations under President Trump, the title of a new exhibition at the Mexican Cultural Institute is appropriately dramatic: “A Dark and Scandalous Rockfall” is a collaborative installation by Perla Krauze and Barbara Liotta, two sculptors from both sides of the U.S.-Mexico border.

The title of the exhibit is derived from the poem “Dry Rain” by Mexican poet Pedro Serrano that begins: “At times the poem is a collapse / a slow and painful landslide / a dark and scandalous rockfall.” The exhibit aims to offer a visual gesture of healing as an antidote to the current downward slide of relations between the two neighbors.

Laura Roulet, curator of the exhibit, said she likes to use the metaphorical language of poetry to describe abstract art. Serrano references the dry, rocky landscape that inspired both artists, and Roulet calls the poem a perfect metaphor for the current political situation.

“It may be a bit obvious to point out that we’re seeing a lapse in the ‘good neighbor’ policy. Art is influenced by the zeitgeist, reflecting and also transcending the political climate,” Roulet said. “These two artists create abstract, apolitical work, yet bringing them together allows for political undertones in the exhibition.”

Both artists use material as metaphor, relying on stone to evoke landscape and shared history. The central element of the exhibit is a gallery-length, collaborative sculpture. The sculpture is built entirely with locally sourced stone (from Tri-State quarry on River Road in Bethesda, Md.). Slabs of Krauze’s black slate line the floor, while Liotta’s jagged rock is suspended in air, making for a breathtakingly beautiful display. Both artists used the functionality of natural stone as an ancient primary building material, emphasizing its origins, form, color and texture, to enhance their stacked and suspended creations.

“I think the joint sculpture reveals the artists’ contributions as complementary and distinctly individual at the same time. It forms a landscape within an exhibition partly about landscape,” Roulet said. 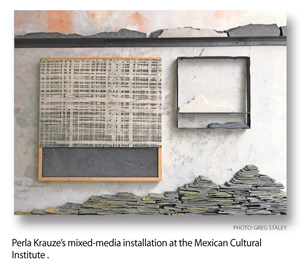 In celebration of the Jewish heritage of the featured artists, the Mexican Cultural Institute partnered with PBS host and cookbook author Pati Jinich to host a dinner featuring a Mexican-Jewish menu that included stories from the history of the Jewish-Mexican community. The Jan 26 dinner highlighted items like matzo ball soup with steamed mushrooms and jalapeños, as well as a Mexican chocolate flourless cake.

“The theme was chosen not only because the artists share the Jewish faith, but because of the vagaries of the European Jewish diaspora,” Jinich said. “Barbara Liotta’s grandfather emigrated from Russia to the U.S. in the late 19th century and Perla Krauze’s family emigrated from Poland to Mexico in the 1930s.” Today, Liotta lives and works in D.C., while Krauze lives and works in Mexico City.

Serrano will also be coming to the institute in April to give a poetry reading.

A Dark and Scandalous Rockfall