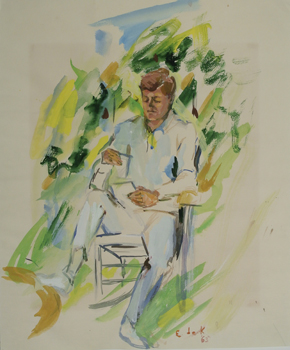 Among the works featured in the National Portrait Gallery retrospective of Elaine de Kooning is this iconic portrait of President John F. Kennedy.

We get lost in the thick paint, the whirls, the faceless men, their splayed lower bodies and the gestural essence of portraits that loom large in life and personality. But a small part of our hypnotic fascination, and admiration, may lie in the fact that the exhibition at the National Portrait Gallery is called “Elaine de Kooning: Portraits,” and not “Elaine Fried: Portraits.”

That is to say that Elaine de Kooning was married, with interruptions for a lengthy separation, to Willem de Kooning, one of the supernovas of American abstract expressionism, which shifted the balance of cutting-edge and contemporary art from Paris to New York beginning in the 1940s. The de Koonings lived and loved and fought as part of a scintillating New York art and cultural scene, and de Kooning was by all accounts a mentor to the young Elaine, whom the Dutch-born painter took under his wing in 1938.

While his career eclipsed hers, in many ways, she was every bit as much a member of the abstract expressionist club as was Willem. Still, the marriage is one of those aspects of biography that has cast a considerable, if not overwhelming, spell over the exhibition — and over Elaine’s legacy.

This is not to suggest that Elaine de Kooning’s work is not worthy of a major retrospective. National Portrait Gallery chief curator Brandon Brame Fortune, in dealing with the omnipresent issue of marriage, recalled a story about Elaine being asked how it felt to have worked in Willem’s shadow. She replied, “I didn’t work in my husband’s shadow. I worked in his light.” 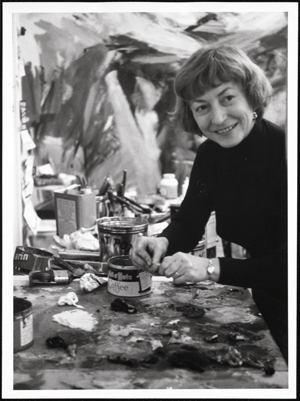 Elaine de Kooning (1918-89) was a bright star herself: a woman in a male-dominated, masculine art movement. Between the two, Willem was probably the one who was, category-wise, more of an abstract expressionist (although he hated the idea of art being submerged into “schools”). Both he and his wife pursued figurative works in the form of portraits.

Which brings us to this simple sentence: Willem painted women, while Elaine, with some exceptions, painted men. The divergence doesn’t stop there: Willem is famous — or infamous if you talk to critics who considered some of his portraits misogynistic — for his 1950s “Woman” series, with its ferocious teeth, bulging energy and angry lines that are not just furiously affecting but downright scary. The most delicate work in this exhibition, on the other hand, is his almost tender, lovingly detailed drawing of his wife.

Elaine never quite jumped over the cliff into predominantly abstract works, but her portraits of men have their own sharp, slashy, splashy characteristics — defining the subjects not by face (some are faceless), but by arms, legs and feet, which hardly ever seem in repose.

Yet, they subjects are always differentiated, if not recognizable. Lounging in gaudy, ill-fitting suits, feet splayed or strongly rooted, the background stroked furiously, they are themselves. If Willem’s women had threatening, sharp teeth (some of them at least), these men are empathetic in their restless poses. 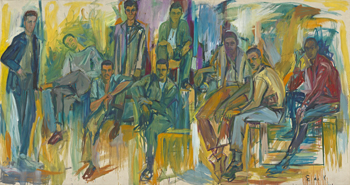 “The Burghers of Amsterdam Avenue”

Some of Elaine’s men are famous — among them John F. Kennedy, poet Allen Ginsberg and painter Fairfield Porter, who commented that her images of men “are both sympathetic and frighteningly acute.”

Color defines her. This is evident in the most telling and, let’s face it, crowd-pleasing section: a roomful of John F. Kennedy portraits in Florida, a commissioned series of works because JFK thought Elaine would be the most appropriate artist for him.

For a man who’s famous for his blasting, wipe-out-the-sun smiles, there’s nary a grin to be caught in gossamer here. This is a restless Kennedy, trying to look easy in the sun, often bathed in Irish green and always thoughtful, even at a distance. I suspect the smile always disguised the detachment, except when in the comfort zone of near and dear, especially his children.

Elaine never painted from life. She worked off her own drawings, not photographs, and the drawings of Kennedy and others are in and of themselves essential to her oeuvre. Bereft of color, the Kennedy drawing is like a half-memory drawn, trying to catch up to the details of a dream just dreamt — unfinished and at the same time done. 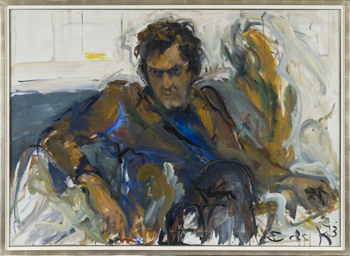 Surprises abound among the men in these portraits. There’s a group portrait of “The Burghers of Amsterdam Avenue” that captures the jaunty eagerness and restlessness of young men. There’s the portrait of poet Frank O’Hara, casually posed, with one knee slightly bent, hand on hip — deceptively light and, like one of his poems, abbreviated. Painter Robert De Niro Sr. is here, big in the flesh, completely unlike his chameleon actor son, along with an intense, edgy, defiant portrait of choreographer Merce Cunningham.

Elaine de Kooning did other things besides portraits, of course, and her marriage endured despite mutual extramarital affairs and a lengthy separation. The two reunited in the 1970s and she took care of Willem when he was struck with Alzheimer’s, though she did not outlive him.

In many ways, his legacy also outlived hers. But looking at these paintings — some of them big and unapologetically bright on the walls — you think differently of what she once said. She painted neither in the shadow of Willem nor in his light. Rather, she made her own light of colors and bold strokes and let it shine on her subjects.