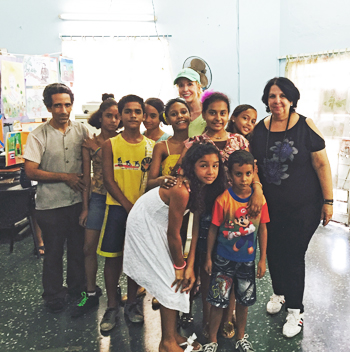 Havana is a fractured place — beautiful, colorful and hopeful, but at the same time, poor, deprived and repressed.

More Americans like myself are experiencing both sides of the communist island located just 90 miles from Florida thanks in part to a historic thaw in relations between Washington and Havana. Earlier this year, the Obama administration eased restrictions on Americans traveling to Cuba as part of a broader normalization of ties with the longtime adversary, although Republican hawks in Congress have been working to block the effort. Ultimately, only Congress can lift the 53-year-old U.S. trade embargo, but Obama is pressing ahead with his rapprochement, which includes reopening embassies in each other’s capitals and gradually ending a policy of isolationism that many around the world viewed as an outdated, ineffective relic of the Cold War.

Already between January and May of this year, there’s been a 36 percent jump in the number of American visitors to Cuba, according to the Associated Press. Currently, rules require that Americans travel to the island ostensibly for educational, religious, “people-to-people” or other approved reasons; travelers then “self-certify” that their trip falls under a sanctioned category. Other Americans bypass the rules altogether and simply fly to Cuba via a third country.

While the loosened travel restrictions could in theory be reversed, there seems to be little appetite in the administration to crack down on travel to Cuba — and Americans are clearly hungry to explore an exotic nation that up until now had been virtually closed off to them.

Old Havana, a UNESCO World Heritage Site, is full of charm, life, music, color and tourists (some 3 million a year by some estimates). A time capsule characterized by both preservation and ruin, Old Havana is home to a mix of architectural styles, including neoclassical, baroque, colonial and art deco, punctuated by elaborate courtyards, covered walkways and five fabulously impressive public squares. The grandiose Capitol building in Havana bears echoes of the U.S. Capitol in D.C., but my favorite attractions were the Museo Hemingway, Museo de la Revolución and the cigar factory. The restoration efforts throughout the elegant but dilapidated capital seem endless, although no one seems to know when anything might be completed.

Beyond the vintage American cars that dot the capital (no American models or parts were imported after the Cuban Revolution and subsequent trade embargo, so keeping these classics running has become a full-time profession in Cuba), Havana is a singular destination for other reasons. 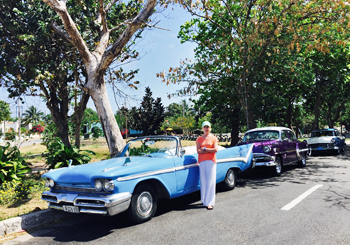 Kathy Kemper, founder and CEO of the Institute for Education, stands in front of a classic American car during a recent trip to Cuba. No American cars or parts were imported after the Cuban Revolution and subsequent trade embargo, so the island is littered with restored American classic cars.

Although the capital of 2 million was built as a major port city, the Malecón esplanade in Old Havana is a quiet stretch of ocean devoid of ships, boats and the kitschy trappings of other beach towns. On the boardwalk, a favorite local meeting spot, people seem to be looking inward as much as they’re gazing outward at the crystal blue Caribbean waters that crash against the seawall.

The romanticism of Old Havana contrasts with Central Havana, which is poor and developing. Tenements that are usually home to several generations living under a single room — and only passed down when someone dies — are falling apart from years of neglect, a crumbling reminder of the toll that Cuba’s sclerotic politics has exacted on the country.

As much as socialism has exacerbated Cuba’s economic decay, it’s had certain benefits. Health care is world-renowned and Havana is generally safe. Still, the country teems with unrealized potential. Pre-revolutionary Cuba was flourishing with newspapers and magazines, but today there is very little in the way of independent media. National heroes such as José Martí and Che Guevara are commemorated in the capital, although unlike other authoritarian regimes, images of the Castro brothers aren’t plastered on every street corner or billboard.

In fact, part of Cuba’s appeal for Western travelers is the lack of signage and advertising. There may be reminders of the island’s communist pride but little of the capitalism it has shunned, which means no nauseating Starbucks or McDonald’s logos around every corner — for the time being at least.

But hints of free-market enterprise have been creeping in ever since Raúl Castro took over for his brother Fidel in 2008. Restaurants, called paladares, are small family-run businesses that are permitted to operate privately by paying a monthly tax to the state. Locals rarely frequent these establishments due to their expense. We found some nice, authentic paladares with lovely gardens, but others had already begun to feel touristy, with overpriced food and small rooms crammed with foreigners and tour groups.

While Cuba has been welcoming tourists for years, many of them from Europe, the vestiges of communism maintain a tight grip on its people. Cubans are generally warm and inviting to foreigners, but politics is still for the most part off limits. When I asked one of our tour guides to tell me more about Batista, the American-backed dictator who was overthrown during the Cuban Revolution, she knew a couple of dates but had no stories or insights. Likewise, the Cubans I spoke with had little to say about Fidel Castro — his health, his family or his legacy. With no free press, scant internet connection and lingering fears about how the government treats political dissidents, what could they say? Some did express hope that things would change under Raúl. They all simply said, “It is about time.”

The neoclassical, baroque and colonial architecture of Old Havana is illuminated at night.

While the 84-year-old leader has gradually opened Cuba up to the outside world, many internet sites remain blocked and the island lacks the infrastructure necessary to handle a large influx of American tourists.

Hotel rooms and roads, especially outside the capital, are sorely lacking. Although the Cuban educational system is highly regarded, many of our tour guides did not have any information on subjects that the state does not want Cubans to know about. Cubans who work in tourism do have some internet connection in their offices, but it’s spotty. Wi-Fi access was equally unreliable, at best, in hotels. Small bed and breakfasts and other family-owned lodgings are a necessity until larger hotels come online, but the accommodations offer little in the way of Western comforts.

Nevertheless, hearing people’s stories offers outsiders an inside glimpse of life in Cuba. In Havana, the traffic is fairly light — a few old Russian cars drive alongside the tourist-type, two-person taxis called Cocomobiles. Our Cocomobile driver had a Ph.D. in computer science, but he earned more money driving a tourist taxi.

Most Cubans, even highly educated ones, earn little — roughly the equivalent of $20 in Cuban pesos a month. The monetary system, in any case, is in tatters. Everyone gets paid in Cuban pesos, but CUCs, or the Cuban convertible peso, is the currency for people working in the travel industry, from bellboys to drivers to waiters. There are no credit cards, so anyone who works in the tourism sector makes much more than highly trained professionals such as doctors. Our cigar guide, for example, makes roughly 120 dollars in CUC-denominated tips, while his wife, a neurosurgeon, makes the equivalent of $24 a month in Cuban pesos.

Ration cards are still given out for items like soap and chicken (a two-pound ration per person). I asked to look at the ration cards, which are often kept in index boxes. There are no digital records, of course. 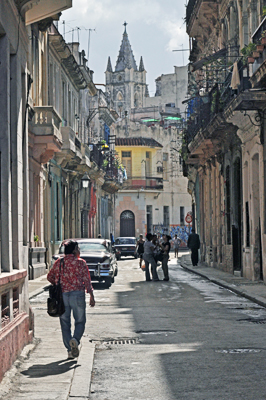 A narrow residential street winds its way through Old Havana, which contains the core of the original city of Havana.

Rice, beans and toothpaste are fairly standard items. But when something as precious as eggs or fruit shows up at the ration store, lines form in a moment and people will wait for hours. Cubans often joke that their national pastime is waiting in line. On the weekend, we saw people waiting at an ice cream stand in a queue that stretched seven or eight blocks. It was hot, but people seemed happy, talking and taking it all in stride. If you see an iPhone or Nike shoes or designer jeans, these were most likely sent by American relatives.

While Cubans covet American-made goods, the island’s unspoiled stamp of authenticity is a major attraction for Western tourists. The impetus behind President Obama’s recent outreach is that as more American travelers and investors flock to Cuba, American ideas will do what five decades of isolationism have failed to do: usher in democracy.

In the meantime, however, as much as Cubans want change, they are fiercely proud of the unique niche they have carved out for themselves throughout history. This strange dichotomy of pride and the inherent limitations of Cuba’s political system is on jarring display for foreign travelers.

I visited a community center in Central Havana called Casa del Niño y de la Niña, which works to keep kids off the streets after school. It consists of a single large room decorated with children’s drawings whose theme was literary icon José Martí and children’s rights. The center has only one computer, a model from the 1980s. Internet, assuming you could get it, costs $8 dollars an hour, which is far too expensive, of course. The children do learn how to use a keyboard, however, and play games and music on the computer.

I met about 15 children ranging from kindergarteners to seventh graders. Because it was spring break, they were not in their traditional uniforms. While there was no air conditioning, the place was very clean, with old plastic chairs that were donated by UNICEF. They were beautiful kids — happy and full of hope. They love the United States, and a few know who Obama is. They like French fries and pizza and know what ice cream is, though only a few have tasted it. All live with at least three generations of family in their homes.

Perhaps one day they’ll be granted some of the other rights and freedoms that their peers in the Western world enjoy as well.

Kathy Kemper is founder and CEO of the Institute for Education, a nonprofit whose mission is to recognize and promote leadership, civility and finding common ground.