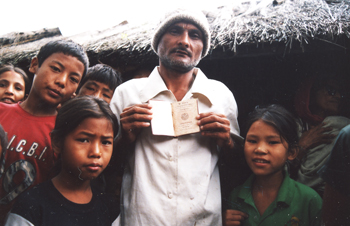 Refugees and asylum seekers who reach the United States may be free of the persecution, threats and dangers that drove them from their home country in the first place, but they face a whole new set of difficulties once they arrive in the promised land.

Since 1975, more than 3 million refugees have resettled in all 50 U.S. states. Many have built successful new lives, although they have also faced the inherent hardships of uprooting one’s life to start from scratch in a foreign country.

Take Hamza Thakir, for instance. Thakir fled Baghdad with his family in 2006 after his father, a former diplomat under Saddam Hussein, was taken from the family home for questioning by American soldiers. The older Thakir was allowed to return home the same day, but “we decided then that it was time to go,” Thakir told The Washington Diplomat at his home in New Jersey.

The family packed a few possessions, piled into two taxis and left Baghdad for Jordan, where they registered with the UNHCR as refugees. But the registrations were only valid for 18 months. One day, after that time was up, Thakir was stopped in the street by Jordanian police. Because he had no papers authorizing him to be in Amman, the then-25-year-old was jailed and threatened with deportation back to Iraq, where he and his family were certain he would be killed — not just because of his father’s connection to Saddam’s regime but also because his brother had worked closely with the U.S. military.

Bhutanese refugees in the Beldangi camp in Nepal show their Bhutanese passport. The United States has accepted over 75,000 refugees from the remote Himalayan mountain kingdom since 2008.

After a family friend helped secure Thakir’s release, his application to be resettled in the United States was accelerated, and he arrived at Newark Airport in August 2008. He was alone; his family had to stay behind in Jordan.

For Thakir, finding work and a place to live were the easy parts of coming to America. He practically walked off the plane into a job with a Jordanian family friend who bought cars over here and sold them back in the Middle East. He also found a small apartment in Elizabeth, N.J. — one of the worst cities in the U.S. for violent crime, but a haven of tranquility for someone from 21st-century Baghdad.

But in other areas of life, Thakir encountered challenges. First, as happens with many immigrants, the U.S. authorities did not recognize Thakir’s degree from an Iraqi university. So instead of doing the master’s degree he had dreamt of completing when he was languishing in Amman for nearly two years, he enrolled at Kean University and did a second undergraduate degree. He graduated with a bachelor’s in public administration last year.

In between work and his studies, Thakir set the wheels in motion to bring his family to the United States. Family reunification is one of the top three priorities of the U.S. Refugee Admissions Program (USRAP). The program is limited to certain nationalities, which are decided each year. Even though Iraqi families were on the list in 2009, the authorities only wanted to allow Thakir’s older brother to join him in the U.S., leaving his elderly father and sisters in Amman. (Even if an application is approved, resettlement can take two years or longer.)

With the help of a group of U.S. veterans who had fought in Iraq, Thakir persisted and, a year after he arrived in New Jersey, welcomed most of his family to America. One sister stayed behind in Jordan with her husband and twin toddlers. They were barred entrance after the husband’s background check came up with alleged “derogatory” elements against him. U.S. immigration officials have refused to say what is stopping them from allowing the rest of Thakir’s family in.

The year that Thakir’s family arrived, in 2009, the family reunification program was suspended “due to high levels of fraud uncovered via DNA testing,” which is part of the health and security screening process. The program was not reinstated until four years later.

Thakir is now married to the sister of an Iraqi friend and still living in New Jersey. Even bringing his bride to the United States from Sweden, where she was living as a refugee, was a saga that took two years and several lawyers to accomplish.

“The resettlement program is very weak for families,” Thakir said. “I have seen people with kids being asked to survive with like factory jobs, at the minimum wage and they’re expected to be OK. Also, newly arrived refugees are only receiving one to three months of assistance for rent and food and things like that. After that, the resettlement agency brings a factory job to the household and makes it seem like the refugees can keep up with the Kardashians,” he said with a wry laugh.

Living on a shoestring budget and adapting to life in a new country has driven many refugees over the edge. But the group that is suffering disproportionately in the United States appears to be the Bhutanese.

Bhutanese are, at a glance, an improbable group of refugees. Their country of origin is a tiny, remote Himalayan mountain kingdom nestled between China and India. Fiercely traditional, it touts what it calls a gross national happiness (GNH) index in its measures of development success. The concept of the happiness index, which Bhutan pioneered in the 1970s, is that as a country develops, it should pay as much attention to non-economic aspects of well being, like how happy its citizens are, as it does to material indicators.

At an international conference this year on gross national happiness, Bhutanese Prime Minister Lyonchoen Tshering Tobgay noted that a 2015 survey of GNH in Bhutan found that 43.5 percent of residents are “extensively or deeply” happy, and that GNH in the kingdom has improved significantly since the last time a survey was conducted in 2010.

So why, then, have tens of thousands of Bhutanese left the country? Why do Bhutanese make up such a large proportion of refugees coming to the U.S., and why are those refugees nearly twice as likely to commit suicide when they get here as the U.S. population at large?

The simple answer belies Bhutan’s happiness index, which is based on the four pillars of equitable social development, cultural preservation, environmental conservation and good governance. Many Bhutanese refugees in the United States — more than 76,000 have arrived here since 2008 — are members of the Lhotshampa minority that was forced out of the Buddhist kingdom in the 1990s. They have been living since then in refugee camps in Nepal, without electricity and with few job or education opportunities for them and their children.

When they arrive in the United States, they, like other refugees, are expected to get a job within three months so that they can pay their rent and put food in their bellies. They also have to repay the cost of their tickets to the United States, which can run in the thousands of dollars. Add to that the language barrier, which makes finding a job more difficult; the extreme culture shock of being transplanted from a thatched hut in a rural refugee camp to an apartment in a U.S. town; and worries about family left behind in refugee camps, and the cycle of despair is complete.

According to a study published in 2012 by the Refugee Health Technical Assistance Center and the Massachusetts Department of Public Health, the suicide rate among U.S.-resettled Bhutanese refugees was 20.3 per 100,000, higher than both the global rate of 16 per 100,000 and the U.S. rate of 12.4 per 100,000. The study found that 71 percent of the Bhutanese refugees who committed suicide during the three years between 2009 and 2012 did not have a regular income and nearly 60 percent were unemployed.

“You can only imagine the stress and strains of folks coming here,” psychiatrist Ken Thompson said in an interview published on the University of Southern California Annenberg’s Center for Health Reporting website last year.

“They get very little support for a brief period of time, and then they are left to find their way in the world. They have to get jobs, language skills, the pressures on the families are intense and they’ve already been highly traumatized and dealt with all kinds of circumstances,” he said.

‘We’re Frozen in the Same Situation’

Carmen Kcomt didn’t get any of the sparse help that refugees get when she came to the United States from Peru in 2003 to escape political persecution and physical attacks.

A judge in Peru, Kcomt had been assigned one of the country’s most high-profile cases three years earlier: a suit to prove, or disprove, that then presidential candidate Alejandro Toledo was the father of a teenage girl. Throughout the investigations, which coincided with a political campaign that saw Toledo elected president, Kcomt and her family became the targets of threats and physical violence. Once, she was dragged down the street by two men on motorcycles. She received threats over the phone regularly. Her three sons needed bodyguards. Her emails and phone calls were monitored.

A year after he was elected president in 2001, Toledo finally conceded that he was the girl’s father. Kcomt had “won” the battle, but the war had taken its toll on her and her family. So in 2003, she moved to the United States with her family and a year later applied for asylum.

It was the start of a new round of troubles, many of them caused by the slow-moving, bureaucratic U.S. asylum process.

“From the time I arrived to the day I was granted asylum, I didn’t have any documents. Nothing at all. Asylum seekers only get a work permit after they’ve been granted asylum,” she said.

“You don’t know if you belong here; you know you don’t belong there any more. You don’t have a place, you don’t have hope sometimes and many times, you just want to go back, even though you know you would be putting your life in danger. Because there is no way to survive in this country with no benefits, no work permit, no job, no language, no money — nothing at all,” she said.

Kcomt was granted asylum in 2008 and became a U.S. citizen in 2013 — a year before Thakir did. Refugees and asylum seekers are encouraged to apply for a permanent resident’s green card as soon as they are authorized to, because if circumstances change in their countries of origin and they don’t have a green card or citizenship, their asylum status could be revoked and they could be sent back.

At the UNHCR Refugee Congress in 2013, refugees and asylum seekers from all 50 U.S. states lobbied on Capitol Hill for the asylum process and refugee resettlement in the United States to be sped up and the knot of bureaucracy to be untangled. That was two years ago.

“You know what happened?” Kcomt asked. “Nothing. We’re frozen in the same situation.”