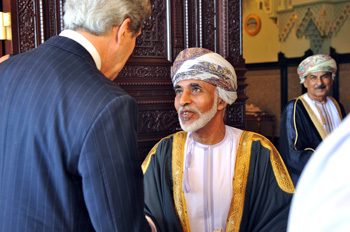 MUSCAT, Oman — Iran’s nuclear ambitions, Syria’s brutal civil war and ongoing hostilities in Yemen dominated Middle East news in 2015 — all while a fourth country that rarely makes headlines, the Sultanate of Oman, quietly worked behind the scenes to resolve all three crises, boosting its foreign policy credentials in the process.

On Nov. 18, Oman celebrated both the 75th birthday of its longtime ruler, Sultan Qaboos bin Said, and the 45th anniversary of independence. The sparsely populated country — 3.6 million people live on an area that’s roughly the size of Arizona and just as bone-dry — belongs to both the Gulf Cooperation Council (GCC) and the Arab League.

“The Omanis have shown themselves over a period of decades to be reliable partners to everyone in the region,” said David Hamod, president and CEO of the National U.S.-Arab Chamber of Commerce.

“Under the leadership of His Majesty Sultan Qaboos, people know that when Oman makes a commitment, it will always keep that commitment,” said Hamod. “This is one of the main reasons why Oman has been so successful in serving as an intermediary between the United States and other entities who may not always share our interests.”

That’s code for Iran, which faces Oman across the Strait of Hormuz, where only 18 miles of water separate the two countries, and through which 15 million barrels of oil — or 40 percent of the world’s total output — pass every day.

Oman’s strategic location, economic interests and a tradition of pragmatism have guided its calculations to remain on good terms with Iran while not alienating its partners in the West. Muscat was instrumental in bringing Washington and Tehran to the bargaining table over Iran’s nuclear program, serving as a venue to conduct back-channel talks that later evolved into the public negotiations that clinched a landmark agreement last summer to curb Iran’s nuclear program in exchange for sanctions relief.

As Yahya Alharrasi, an official with the Omani Ministry of Information, put it: “If you can’t cut the hand, why not shake it?”

So Oman took advantage of its position as one of the few Gulf countries to enjoy friendly relations with Iran to bring both sides together, albeit quietly — in keeping with its low profile.

During a recent visit to Oman, The Washington Diplomat spoke with Hatim Al Taie, editor-in-chief and CEO of Al Roya, a daily Arabic-language business newspaper.

Al Taie said that in order to understand Omani foreign policy today and its motives for bringing Washington and Tehran together on the nuclear issue, one must go all the way back to 1977, the year Egyptian President Anwar Sadat shocked the world with his historic trip to Jerusalem.

“When Sadat visited Israel, the only country that stood up for Egypt when everybody else cut diplomatic relations was Oman,” Al Taie explained. “We didn’t take any negative action against Sadat, and now when we look back, we realize Oman was on the right side. If all the Arabs got behind Sadat — even though we didn’t agree with everything Sadat did — at least his position would have been stronger.”

Later on, during the Iran-Iraq War, which raged from 1980 to 1988 and killed an estimated 1 million people, Oman remained neutral.

“We didn’t support Saddam Hussein like the other Gulf countries. We decided not to be part of this game,” Al Taie said. “This war was absurd, ridiculous and silly. Oman tried to push for peace, and kept the same distance from Iraq and Iran. We didn’t take sides.”

Again, when Iraqi forces under Saddam invaded Kuwait in 1990, Oman “pushed to the maximum to have a solution. It was very clear that we needed to find a peaceful solution to this crisis and not go to war, but of course it didn’t go through.”

Many other examples of Oman’s regional neutrality and determination to avert conflict abound, including the recent war in Afghanistan waged by the Taliban against U.S. coalition forces. Al Taie said that “extremists from every Arab country except Oman” went to Afghanistan to fight the Americans.

When it comes to hatred of Uncle Sam, no country in the Middle East tops Iran, which has not had diplomatic relations with the United States since the 1979 takeover of the U.S. Embassy in Tehran by student revolutionaries.

But in 2011, Omani negotiators managed to secure the freedom of three American backpackers who had inadvertently strayed across an unmarked stretch of the Iran-Iraq border and were promptly arrested by the regime as American spies.

According to a December 2009 cable sent by the U.S. Embassy in Muscat and exposed by WikiLeaks, Oman’s foreign minister, Yusuf bin Alawi bin Abdullah, had offered to set up talks between the U.S. and Iran to free the hikers as long as both sides kept things quiet.

Richard Schmierer, who served as American ambassador to Oman from 2009 to 2012, recalls that ordeal well.

“During my time there, the Omanis played a positive role in engaging the Iranians and arranging for the release of the three American hikers,” he told The Diplomat. “That created an atmosphere where it was possible for the Iranians and us in the West to decide maybe we could engage on the nuclear issue.”

Schmierer, who has since retired from the Foreign Service and now works at the Washington-based Middle East Policy Council, says that because of Oman’s history, its people are outward looking and quite accepting of differences. Under Sultan Qaboos, the country also pursues a foreign policy that’s independent of much larger Saudi Arabia, which dominates the GCC.

“The Omanis see themselves more as facilitators than as middlemen — someone who helps parties who might have issues or reasons not to be on close terms with each other find ways to overcome those obstacles,” he explained. “They typically look for ways to facilitate resolutions to regional conflicts or tensions through dialogue and diplomacy.”

“Although Oman possesses one of the most professional and formidable militaries in the GCC, it has maintained a policy of relative neutrality and continues to implore its GCC partners to pursue diplomatic solutions to the conflicts in Syria, Iran and Yemen. And yet, Oman’s foreign policy has as much to do with its economic outlook as it does with its diplomatic and military engagements,” he wrote in a November 2015 report. 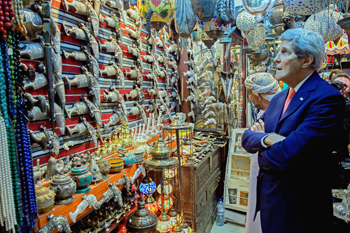 U.S. Secretary of State John Kerry looks at a wall of khanjar knives (traditional Omani daggers) during a visit to the Muttrah Souk in Muscat on Nov. 10, 2014, during a break in P5+1 negotiations over Iran’s nuclear program.

“Cooperation with the other Gulf countries has not led to meaningful economic integration, nor has it yielded critical employment opportunities for young Omanis in wealthier GCC states,” the paper argues. “In Oman’s calculations, the opening of Iran as a major economic hub and market — coupled with the sultanate’s special mediator status with the U.S. and Europe — will more than make up for any losses its bold political stance may incur vis-à-vis the GCC.”

Oman is distinct from other countries in the region for a number of reasons. It has a diverse population that includes ethnic groups ranging from the Baluchi, originally from Pakistan, to Swahili-speaking Arabs who trace their origins to Zanzibar, on Africa’s east coast.

Besides boasting the most ethnically diverse population of any Arab country, Oman is unusual in another aspect: three-fourths of its people belong to the Ibadi sect of Islam, which is neither Sunni nor Shiite (Oman’s Sunnis live mainly in coastal villages, while its few thousand Shiites reside in the cities).

“The Iranians see Oman as a country that does not share the Sunni-Shia distinction,” Schmierer explained. “For that reason, Iran is more willing to engage with a country like Oman, which can use that goodwill to help diffuse tensions with other countries.”

Indeed, said Al Taie, “five years ago, it was considered impossible to bring these two sides together [for nuclear talks], but in the summer of 2013, Sultan Qaboos visited Tehran to intervene personally. I think it was very fruitful in the end.”

Oman is also trying to broker an end to the hostilities between its two neighbors, Saudi Arabia and Yemen, which have been raging ever since the ouster of Yemen’s president, Abd Rabbu Mansour Hadi, in March 2015. Saudi Arabia has led a coalition air campaign — code-named Operation Decisive Storm — against the Iran-backed Houthi rebels who overthrew Hadi and his government. The fighting has killed over 2,600 people and exacerbated a humanitarian crisis in the Arab world’s poorest country.

Oman is the only Arab monarchy that declined to participate in the Saudi-led offensive, which has been criticized for indiscriminately striking civilian targets. As Foreign Minister Alawi told reporters earlier this year, “Oman is a nation of peace. We cannot work on peace efforts at the same time we would be part of a military campaign.”

According to Amnesty International, since the conflict in Yemen began, more than 2,000 civilians — including at least 400 children — have been killed, “and the vast majority of civilian deaths and injuries have been caused by the Saudi-led coalition’s often reckless and indiscriminate aerial bombing campaign.”

Schmierer, noting Oman’s lengthy desert border with Yemen, said many Omanis have sympathy for their neighboring country and have provided assistance to Yemen.

“The dispute involving Yemen is with the Houthi community, which is Shia. The Iranians are working with them, to the detriment of the elected government,” he said. “Oman, not being Sunni or Shia, potentially could play a helpful role in diffusing that conflict and getting the parties to come to a resolution.”

Similarly, Alawi traveled to Damascus in late October to meet with Syrian President Bashar al-Assad in an effort to end Syria’s civil war, which has killed more than 250,000 people and displaced half the population.

Oman was not untouched by the Arab Spring revolt sparked five years ago by the self-immolation of Tunisian fruit vendor Mohamed Bouazizi, yet unlike protesters in Tunis, Cairo, Damascus and Tripoli, young Omanis demanded only the reform of the Qaboos government, not his ouster. Demonstrations were relatively subdued and no one got hurt.

“When you see the destruction taking place all over the Arab world, the objective of stability is a positive one,” said Abdulla Al-Harrasi, chairman of Oman’s Public Authority for Radio and TV. “In 2011, we had youths looking for jobs, not to destroy the state or overthrow the sultan. This is a very peaceful country.”

It’s hard to overstate the sultan’s central role to the modern development of Oman. After taking power in a bloodless coup against his father in 1970, Sultan Qaboos instituted a modernization campaign that opened Oman to the outside world and transformed it from an impoverished backwater into an affluent, influential regional player. Under his moderate leadership, Sultan Qaboos has dramatically boosted employment, education, health care and infrastructure while slashing poverty. His achievements — and the stability they have engendered — have made him a revered fatherly figure, even amid calls to diversify the oil-dependent economy, tackle youth unemployment and loosen government restrictions to allow greater freedom of expression.

Yet when it comes to the virtually taboo issue of what will happen once Qaboos — who has no children, no siblings and no designated successor despite his health issues — passes from the scene, Schmierer said he’s not overly concerned.

By law, the royal family must appoint a successor within three days of the sultan’s death; according to a recent report in the Sydney Morning Herald, the ruler’s cousins Assad, Haitham and Shihab bin Tariq al-Said are the most likely successors.

“I am quite confident that Sultan Qaboos has put in place a well-functioning government apparatus that will continue to serve Omanis very well,” the retired diplomat told us, “regardless of who might become the sultan.”

Victor Shiblie is publisher and editor in chief of The Washington Diplomat.