Home The Washington Diplomat May 2016 For Thai Couple, Honeymoon With Washington Isn’t Over 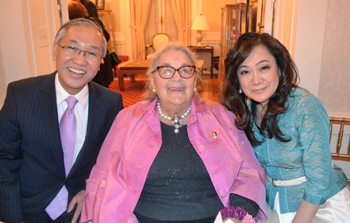 “I love politics!” exclaimed Wanchana Manawapat, wife of Thai Ambassador Pisan Manawapat. “I keep watching the debates and deciding who’s winning.” Following diplomatic protocol not to interfere in the domestic politics of a host nation, however, she stopped short of handicapping the U.S. presidential race and revealing whom she hopes will end up in the White House.

“At home, many Thais don’t speak English, so Thai media conveys the American debates to them. We often take our news from CNN, BBC,” she noted.

Thai Ambassador Pisan Manawapat, left, and his wife Wanchana Manawapat, right, opened their residence — the historic Codman-Davis House — to host a surprise 86th birthday party for Esther Coopersmith, a former U.S. ambassador to the United Nations who befriended the queen of Thailand while serving as a UNESCO goodwill ambassador.

“What I would like Americans to know about my country is that we have had a relationship with the United States for 183 years, when Andrew Jackson was president. Thailand was the first country in Asia to recognize the United States.”

The Manawapats also have a special connection to Washington, D.C. — and to American politics. Their first overseas posting was in D.C. in the late 1980s, shortly after they were married. During that time, Pisan Manawapat spent a year on Capitol Hill as a fellow for the American Political Science Association (APSA) in the offices of Rep. Don J. Pease (D-Ohio) and Sen. Daniel Inouye (D-Hawaii).

“When we arrived the first time, we were just married. We were newlyweds,” Wanchana said.

“I almost married someone else. We had the rings and everything,” she admitted. “Then a mutual friend introduced Pisan and me when we were in our early 30s. We had gone to high school together. We were in the same grade. He got a scholarship from the foreign minister,” she recalled, noting that she thought a career in diplomacy would be fascinating. “Before we married, I had no idea what life was like for the diplomatic spouse — and how different it would be to be the ambassador’s wife.”

A successful businesswoman in her own right, Wanchana said she learned that an ambassador’s wife “has a supporting role, not a leading role. This diplomatic role is completely different than any business role, especially when it is my business and I can be my own boss. With my own work, I would have my own income and my own agenda.”

Her education and career have been diverse. With an undergraduate degree in mathematics from Chulalongkorn University in Bangkok, she then received a master’s degree in media and technology from Boston University before earning a certificate of special studies in administration and management from Harvard.

Her work has been equally varied. Wanchana’s first job was as product manager and secretary to the chairman at Saha-Union Public Company Ltd. in Bangkok, which manufactures Nike shoes, among other items. For her most recent venture, she was the founder and advisor of Wongthep Co., a distributor and contractor for Musco Sports Lighting, an Iowa-based company that provides lighting for major sports events and stadiums.

“My career has been on and off. When my husband starts to leave again [to a new post], I stop work and follow him.”

She has followed him around the globe. Before his most recent post in Washington, Manawapat had served as Thailand’s ambassador to the European Union, Belgium, Luxembourg, India and Canada. He also served at the Royal Thai Embassy in Kuala Lumpur and as deputy chief of mission in Tokyo.

Despite his early foray into American politics, Manawapat’s career has been in diplomacy, not politics. Still, Wanchana thinks the hours are similar. “My husband is devoted to the Thai government. He breathes in and out for his government back home. He works a lot, night and day. It’s not unusual for him to work 12 hours a day.”

She has also pitched in to do her fair share. “As the ambassador’s wife, I design everything about our entertaining. I plan the menu. I taste the food. I oversee the presentation. For instance, I select different dishes for a Thai delegation than I do for American guests or other nationalities.”

Part of her job is also enlightening Americans about her homeland. “Americans who come to Thailand for vacation think Thais are carefree, spend their time by the beach and party all the time,” she joked. Despite these misconceptions, “Americans know more about Thailand than the Thais know about America. Americans have a good impression of the Thai people.” 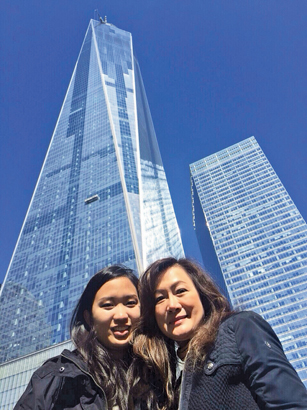 But Thailand’s international reputation has been marred by political instability and charges of authoritarianism.

Coups d’états have been a regular facet of Thai politics since the introduction of a constitutional monarchy in 1932. In recent years, power has swung from populist Prime Minister Thaksin Shinawatra and his legions of supporters, which tend to be poorer and more rural, and the urban establishment elite, which is more middle-class and aligns itself with the military.

Over the last decade, protests between Shinawatra’s so-called “red-shirt” supporters and the “yellow-shirt” opposition drew millions to the streets and deeply polarized the Southeast Asian nation. A telecommunications billionaire, Shinawatra was deposed by a military coup in 2006 and went into self-imposed exile. His sister Yingluck won a landslide victory in 2011 to become prime minister but was removed from office by the military in 2014 on charges of corruption.

Since then, the military junta has tightened its grip on the fractured political system, granting itself sweeping powers, muzzling the media, banning protests, detaining academics and activists and backtracking on promises to hold elections.

“After seizing power last year, General Prayuth [Chan-ocha] promised elections and a return to civilian rule of law,” wrote the New York Times editorial board in April 2015. “Not only do those promises remain unfulfilled, but General Prayuth, in place of martial law, has now granted himself sweeping executive, legislative and judicial powers under Article 44 of Thailand’s interim Constitution.”

The ambassador struck back on those accusations in a response to the New York Times in which he wrote that, “Since May 2014, Thailand’s leaders have lifted the country out of political paralysis and violence. Until then, Thailand’s version of democracy was plagued by rampant corruption, abuse of power and absence of rule of law.”

Similarly, Wanchana defends her government back home. “Thailand is in a political transition. The people are fed up with street protests and political chaos. The country is taking steps to rectify our flawed democracy. Over the decade, our political system was broken, society deeply divided, parliament dysfunctional, government shut down. Money was an indispensable part of the election campaign and voters were angry with the establishment,” she explained.

“Thailand is taking a break. Political violence was brought to a halt. The new draft constitution will be presented to the people for national referendum by early summer and free and fair elections should be held by next summer,” she told us.

“We are going through these challenges and are confident that in the end, we will muddle through to get our democracy,” she added. “We can certainly learn more from Washington on how to strengthen our political institutions, promoting good governance and respect for the rule of law.”

In the meantime, she encourages both investors and tourists to visit her homeland, which is studded with ancient ruins, picturesque beaches and an economy that is expected to pick up this year and next. “We are a free and open society. Today, we are a base for car manufacturing and IT, the technology we export to the U.S. We also export food around the world — seafood, rice and fruit.

“I love this country,” Wanchana said of the U.S. “I love the food and everyone is so nice. I hope to build good relationships that will last forever.”

Aiding in that endeavor is the Thai Residence, an impressive venue for hosting events. Once called the Codman-Davis House, it was built in 1906 by architect and interior decorator Ogden Codman and is cherished for its neoclassical revival style. Codman designed the house for his cousin, Martha, heiress to a prominent Boston clipper ship family. She was known for being an extravagant hostess and for her collection of early 19th-century American paintings.

Paintings are again in the spotlight in this gracious home — only this time, they are Wanchana’s own work.

“I took a short art course when I was an undergrad in Thailand. One day I felt like I’d like to do some art. I was walking in a shopping mall and they were teaching in a small gallery.” She promptly joined the class. “When I completed my painting, the gallery owner asked, ‘Can I buy it?’” Wanchana proudly recalled. “I like to work in oil, watercolors and pen and ink. I don’t force myself to paint. I only paint when I feel like I want to.”

The Manawapats’ daughter, Arisa, is a law student in New York City at Columbia University Law School. As a little girl, she traveled with her parents to Malaysia and Japan and later attended an English boarding school.

Today, the busy empty-nesters stay in touch with their daughter and try to enjoy their downtime from diplomacy. “We love to play golf but I can beat him,” Wanchana said smiling.

The couple is also busy reconnecting with the city they got to know as newlyweds and neophytes to diplomacy. “You make friends from all over the world. If you keep in touch, you can connect with old friends,” she said. “We’ve come back and we have good friends here. It’s wonderful to get together with them.”