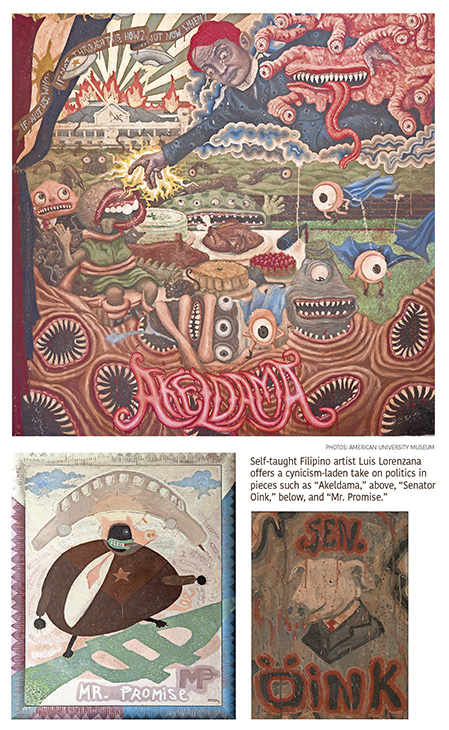 A former politician now uses a paintbrush to express his cynicism with government but also his enduring hope for a gentler, fairer world. He’s also a self-taught artist from the Philippines — where turbulence and divisiveness in politics is the norm — whose distinct brand of pop culture-surrealist work offers a searing commentary that speaks to the universal political and social upheaval of our day.

That’s the unique background and message of Filipino artist Luis Lorenzana, whose bold, arresting works are now on display at the American University Museum in the aptly titled “Heroes & Losers: The Edification of Luis Lorenzana.”

According to the museum, the aim of the exhibition is twofold and almost contradictory: to reflect on themes of selfless heroism and the all-too-familiar failures of the democratic system — a strange dichotomy of optimism and despair that Lorenzana’s equally strange works capture in thought-provoking ways.

Coordinating curator Lisa Guerrero Nakpil was first intrigued by Lorenzana’s work — specifically his series on Filipino heroes — because she always wished that the Philippines “had its own pantheon of heroes in the same way the United States reveres the men of the American Revolution,” she told us.

Lorenzana himself played a small role in the complex tapestry of Filipino politics, although his path was a circuitous one that led him back to his original passion.

Born in 1979, Lorenzana was raised in inner-city Manila but began painting rural scenes of rice fields when he was just 6 years old.

“His deep love for his community strongly molded his consciousness, which led him to pursue Public Administration and Governance at University of the Philippines,” wrote Hannah Jo Uy in a March 2017 profile of the artist for the Manila Bulletin. “He completed his studies, through a full scholarship, and while doing so he met his first love and continued to nurture strong ideas for change within the country.”

Lorenzana took a position with a prominent senator in the Philippine Senate, where he remained for four years in the early 2000s before disillusionment and disappointment with the the inner workings of government set in.

“Lorenzana’s background is unique, in that he started as a political scientist,” Nakpil told us. “He is a trained analyst and social observer.”

And while he has no formal art training, Lorenzana has spent a lifetime studying a diverse spectrum of artists ranging from the classic masters such as Rembrandt to Latin American folk artists.

Lorenzana’s art is not only shaped by his political disappointments, but also his personal setbacks, which include his home burning down as a child and his fiancé leaving him when he decided to ditch a lucrative career in politics in favor of a much riskier one in the fickle world of art.

He soon learned just how risky it was. Depleted of money and rejected by a string of galleries, Lorenzana eventually stored his collection away. But, when his earlier pieces happened to be shown to a prominent collector, his art career took off, with exhibitions not only in Southeast Asia, but throughout Europe and the United States.

Lorenzana’s work has earned widespread acclaim not only for its incisive political commentary, but also for its vibrant, eye-catching style that defies easy categorization.

His studies of masters such Leonardo da Vinci, for example, inspired a series on the “Mona Lisa,” but his version of the enigmatic smiling lady resembles some sort of demented yet whimsical blend of Salvador Dalí-esque surrealism and modern-day Snapchat selfies.

But this playful approach belies the more serious political undertones of Lorenzana’s art, which is especially evident in the American University show, where the focus is on the national heroes of his homeland.

There are four portraits painted circa 2006 on display. Andrés Bonifacio, a former clerk messenger who taught himself French, English and Spanish by reading up on American presidents, went on to become a Filipino revolutionary leader in the late 1800s and is often referred to as “The Father of the Philippine Revolution” for his role in seeking independence from Spanish colonial rule.

We also see Lorenzana’s rendition of Antonio Luna (1866-99), who studied pharmacy, literature and chemistry and would later become a feared general in the Philippine-American War. Meanwhile, Apolinario Mabini (1864-1903) survived polio (much like American President Franklin D. Roosevelt) to leave his mark on history as prime minister of the First Philippine Republic.

Finally, there’s José Rizal (1861-96), considered one of the country’s greatest national heroes. An ophthalmologist by training, Rizal’s writings helped spark the Philippine Revolution in 1896, resulting in his execution by the Spanish colonial government for the crime of rebellion.

One of the main pieces in the exhibit is called “Akeldama.” Inspired by B-movie posters, it depicts Rizal as a space-like, angry angel sent to destroy the country’s presidential palace and its politicians, who resemble one-eyed eyed aliens and sharp-toothed monsters.

All of the portraits depict national heroes persecuted by corrupt governments, usually at the behest of colonial powers, for their efforts to liberate the Philippines.

At the same time, Lorenzana doesn’t shy away from his country’s own recent legacy of corruption, as seen in nightmarish, in-your-face pieces such as the simply named “Senator Oink,” which portrays a pig’s head in a man’s suit with blood-splattered graffiti spelling out the title of the piece.

Again, Lorenzana’s work is an amalgamation of political pride and disgust. It’s also distinctly Filipino but has universal resonance.

“The Philippines is in a unique position of having been created in the crucible of two empires, the Spanish and the American, while being in the center of Southeast Asia,” Nakpil said. “So, its art and artists uniquely resonate with all those spheres.”

At the same time, all of the Filipino heroes were ordinary men doing extraordinary things, she said. “This will have universal appeal.”