Home The Washington Diplomat February 2020 From Damascus to D.C., Syrian-Born Clarinetist and Composer Knocks Down Borders 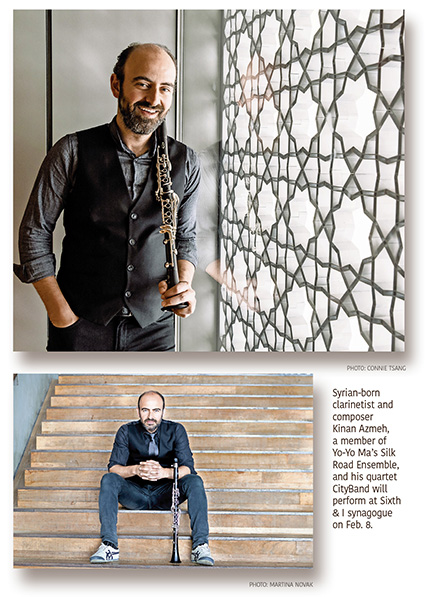 Billy Joel once described music as an explosive expression of humanity. “It’s something we are all touched by. No matter what culture we’re from, everyone loves music.”

On Feb. 8, another artist who shares Billy’s belief in the universal power of music is coming to the nation’s capital — an artist who himself embodies music’s cross-cultural resonance.

Kinan Azmeh, a 43-year-old clarinetist and composer who was born in Damascus, is arriving in D.C. with his entourage CityBand, a New York-based “Arabic-jazz quartet, as part of a Washington Performing Arts concert. A member of Yo-Yo Ma’s acclaimed Silk Road Ensemble, Azmeh mixes musical genres including jazz, folk, contemporary and classical melodies that also incorporate sounds from his birthplace of Syria and the wider Arab world.

With several albums under his belt, Azmeh’s biography reflects his diverse international influences. He has performed all over the world in places such as the Opera Bastille in Paris; the Tchaikovsky Grand Hall in Moscow; Carnegie Hall and the U.N. General Assembly in New York; London’s Royal Albert Hall; and in his native Syria at the opening concert of the Damascus Opera House. He is also known for his human rights advocacy and for raising awareness about the civil war that has ravaged his homeland for the last nine years.

But Azmeh does not want his music to be viewed within geographical or cultural constraints. He uses his training to illustrate his belief that regardless of where it comes from, music is borderless.

“I don’t believe in the geographical categorization of music. Music for me forms a continuum,” he told us. “I understand that there are some musical vocabularies that are specific to a place or a historical background, but at the end of the day, it is all human heritage.”

He added: “If you spend your life learning a tradition, it becomes equally yours. I was born and raised in Damascus; however, Beethoven for me was not foreign at all because I spent my life learning it. He is no longer only a German composer — he is a composer that transcends borders.”

Azmeh’s journey as a composer and clarinetist in many ways embodies this philosophy. Born in Damascus to parents who were themselves amateur musicians, he traveled to New York to study at the renowned Juilliard School and went on to earn his doctorate from the City University of New York.

It was in New York where Azmeh put together CityBand, which began with his friend Kyle Sanna, the group’s guitarist. Later they would recruit bassist Josh Myers and percussionist John Hadfield. The band has played globally for the last 14 years across Europe, the Middle East and the United States.

A quintessential American melting pot, New York provided Azmeh with ample room to grow as a versatile artist whose compositions include works for solo, chamber and orchestral music, as well as music for film, live illustration and electronics.

“New York is a place that is so culturally diverse and dynamic. It is a place where your tools and artistic expression gets challenged to the maximum,” he said. “These challenges are necessary in one’s growth as an individual and as an artist as well.”

While Azmeh does not want to be solely defined by his birthplace, Syria continues to play a large role in his life — both professionally and personally. He still goes on tour with his Damascus band Hewar, and he fondly recalls how his hometown in many ways resembled New York through its dynamic and diverse music scene.

Syria’s uprising-turned-civil war — and the millions of refugees it has produced — also drives Azmeh outside of his musical career. He has partnered with the International Rescue Committee (IRC) Refugee Youth Summer Academy in the United States to help refugee children, including many from Syria.

The turmoil and divisiveness shaking American politics has also personally affected Azmeh. He was almost barred from returning home to New York when President Donald Trump issued an executive order that banned entry into the U.S. from several Muslim-majority countries, including Syria.

He remains modest about this experience as well as his human rights work, downplaying his advocacy. His philosophy on human rights mirrors his belief in music: Both defy boundaries, limits or preconceived notions, and people can advocate for human rights regardless of their profession or background.

“All of us can and should be activists and advocates for human rights in everything we do. Making music is an act of freedom and freedom is a basic human right. By practicing this freedom, you hope that it will encourage others to practice that right as well,” said Azmeh. “I am a human first and a musician last. Music for me is a tool to dig deeper into the human condition and to contribute more to the wellbeing of my ever-expanding surroundings.”

Azmeh and CityBand’s show on Feb. 8 in D.C is supported by Washington Performing Arts and will be held at the Sixth & I synagogue. It is in many ways a fitting venue that matches Azmeh’s own beliefs in music’s ability to transcend cultures. While Sixth & I serves as a historic synagogue, it brands itself as an institution where ideas cross over and a sense of community is fostered. Azmeh said he is looking forward to sharing with listeners the same pleasure he takes in creating his music.

“I would also like ‘pleasure’ as a noble sentiment to be centerpiece in my concerts — not in the shallow intertwinement sense, but rather the deep and moving feeling we get when we experience art,” he said. “The music I play reflects my sense of the world around me, and it pleases me to be sharing it with the world around me. I do think pleasure is contagious and so is optimism, and I try to hold on to both.”

Nicholas Morgan (@NikMorgan10) is a freelance writer based in New York City who focuses on Russia and the Middle East.