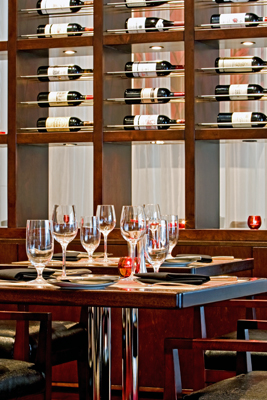 Hotels are a frontline for diplomats and their guests in the city. Whether it’s a new arrival previewing the local real estate and school options, or a visiting delegation in town for a major meeting, or members of the diaspora converging for a National Day celebration, hotels are constantly playing host to the international community.

And it’s a role they’re constantly working to improve on, as part of an overall effort to keep up with an increasingly sophisticated city — and clientele. “We are continually investing in the community and striving to evolve with our neighborhoods,” said Gregory Leinweber, area director of sales and marketing for Kimpton Hotels, the boutique brand that owns Hotel Monaco, Madera, Helix and the George, among others.

But while the city rarely slows down, official Washington sometimes grinds to a halt — as seen in the 16-day government shutdown in October. Ongoing political battles have also tightened U.S. government spending, putting the kibosh on many junkets, conferences and out-of-office meetings.

But has the city’s political paralysis put its hospitality and convention business on ice? Years ago, when Washington was synonymous with government and nothing else, a shutdown might have spelled disaster for area hotels. Today, however, it means a hit, but not a knockout.

While the region’s economy is still inextricably linked to the federal government, it has also diversified and developed a well-rounded urban identity — helping to buffet its businesses against the turbulence of politics in the nation’s capital.

The shutdown in October caused anxiety across the region’s service industry, but its impact on bookings was mixed.

“The shutdown didn’t affect us at all,” said Liliana Baldassari, director of public relations for the Four Seasons in Georgetown. “We have lots of industries that book our facilities.”

In fact, many U.S. government-funded meetings tend to take place outside the Beltway, throughout the rest of the country, and D.C. hotels host a variety of non-government-related conferences. Over the years, the area has developed a range of industries, specializing in everything from biosciences to cybersecurity.

Yet there’s no denying that government remains the lifeblood of the area’s economy, nourishing everything from defense contractors to the army of lobbyists, consultants and former bureaucrats that make the city one of the wealthiest in the nation.

“We were definitely impacted,” said Erica Gonzalez, area director of sales and marketing for Kimpton Hotels. “Groups cancelled because they were government-funded or had business to do on the Hill and couldn’t meet members of Congress.

“It’s not news that D.C. is a politically driven market. It’s always been this way and it’ll happen again [because] the government is a huge demand driver for the city,” she said.

The Sofitel’s French-inspired ICI Urban Bistro will welcome a guest chef from Buenos Aires in March.

“We have businesses with government contracts and with trade associations whose biggest job is to push through policy, so if there’s no government, then policy can’t be discussed” and we lose business, Gonzalez added.

Nevertheless, “D.C. is still a much more stable market” than other cities “because the government operates all year round,” she noted.

“It’s one of those things we have to continually be mindful of and be sure our overall strategy incorporates multiple channels for business. We can’t rely on just the government. We must have other things that balance our business,” said Gonzalez.

“While the government shutdown was certainly an unfortunate event that had a negative impact on travel, we were pleasantly surprised to see that our hotels didn’t suffer too terribly,” said Sarah Maciejewski, director of communications for Destination DC, a nonprofit corporation with 850 business and organization members that support the city’s travel and tourism sector.

“This speaks to the strength of the D.C. tourism market in general, but in this case specifically to how strong our meetings and conventions market is,” she said.

A key part of Destination DC’s mission is to highlight the importance of travel to Washington’s coffers. In 2012, visitor spending in D.C. topped $6.2 billion and supported 75,300 jobs in the District, according to the group. That makes the hospitality industry the second-largest employer in the city, behind only the federal government, with 65,000 people directly employed by the industry.

“Every visitor to the District of Columbia plays a vital role in sustaining our local economy since they stay in our hotels, dine in our restaurants, visit our attractions and shop in our stores,” D.C. Mayor Vincent Gray said during the U.S. Travel Association’s National Travel and Tourism Week in May. “It’s important that we continue to invest in tourism and keep D.C. at the forefront of the consumer’s mind.”

Hotels are doing just that, adopting myriad changes to attract new guests and help them take advantage of all that the city has to offer, from the traditional museums on the National Mall to its many newer attractions. New chefs are taking over hotel kitchens, rooms and whole buildings are undergoing renovation, meeting spaces are being refurbished, shops and luxury features are being added, paintings hung and discounts rolled out. Bland neutrality is out and specialty marketing is in.

These changes fit neatly into Destination DC’s new 2014 yearlong marketing and advertising campaign, tagged “DC Cool,” which aims to drive tourism to the city. And hotels are front and center in the effort to promote Washington as a cool place. “There’s so much excitement here. There’s so much happening. We want people to really tap into it all,” said Maciejewski.

Hotel George is doing its part on Capitol Hill. The 15-year-old Kimpton boutique property is undergoing a top-down, multimillion-dollar renovation, said Leinweber, and all 139 guestrooms will be more stylish and comfortable. The redesign, which debuts in January 2014, will also highlight the city’s history through a contemporary Kimpton lens — such as the parchment-and-ink wallpaper depicting George Washington’s inaugural address and custom-accent pillows based on his famous uniform. 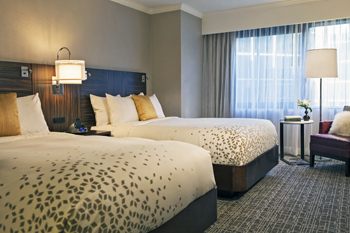 The Renaissance DC Downtown Hotel recently finished a $30 million redesign of its 807 guest rooms and suites.

The Donovan House’s refurbishment began last month to make rooms more business-friendly and chic. The changes will be subtle, such as the addition of desks and other small aesthetic touches to make the rooms “more fun and Kimpton-like,” said Jaclyn Randolph, area public relations manager for the company.

The Marriott at Metro Center also underwent a recent room renovation, and in 2013, the Renaissance DC Downtown Hotel, at 999 9th St., NW, finished a $30 million redesign of its 807 guest rooms and suites. In addition, a new mobile check-in app permits Marriott Rewards members to use smartphones as an alternative way to check into local Marriott properties.

“They can check in after 4 p.m. the day before arrival and receive automatic notification when their room is ready. A pre-programmed key card will be waiting,” Indre explained. 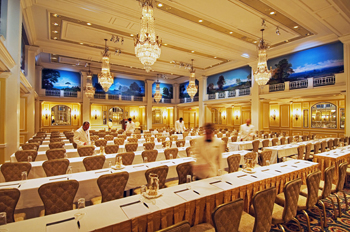 The ballroom at the Willard InterContinental Washington

Other hotels are also offering their guests perks framed around promoting the city’s distinct character.

The Willard InterContinental Washington is introducing “Insider Breaks” during conference coffee breaks. That’s when the meeting planner will present guests with a brief overview of Metro-accessible, must-see destinations such as Ben’s Chili Bowl eatery.

“We want to create a moment to learn, discuss and experience the city’s history and the Willard’s connection to that history,” said Barbara Bahny, director of public relations for the Willard InterContinental in both D.C. and New York. “We want guests to have experiences they wouldn’t otherwise have if not provided by the concierge.”

Informing visitors of what to do outside their hotel doors is precisely what Destination DC’s cool campaign is championing.

In Georgetown, the Four Seasons hotel’s M29 Lifestyle shop will feature a DC Cool wall with rotating seasonal displays, said Baldassari. For example, there will be a “keep cool” spring and summer sun and swim series; “be cool” graduation gifts and gadgets; “keep your cool” apothecary offerings; “too cool for school” with back to school ideas; and “a cool kind of holiday” with unique gifts — all featuring exclusive, D.C.-centric products.

Meanwhile, the spa at the Four Seasons is trying to help stressed-out Washingtonians unwind with a unique cold-stone massage. “It’ll be a spin on the classic hot-stone massage,” Baldassari said, “a 20 minute treatment with cool white marble stones that will reduce soreness and draw heat from the body to boost energy levels.”

For guests who’d rather rough it, as much as you can rough it at a Four Seasons, the hotel will offer families with children the chance to make believe they are camping with the Capital City Family package. Rooms will be equipped with a tent, child-friendly foods, kids’ bathrobes, slippers and National Geographic Kids magazines.

For the single female traveler, Four Seasons is planning Gal on the Go packages with goodies like beauty wipes, lint rollers, fashion magazines and a going-out guide to the coolest hotspots in the city. 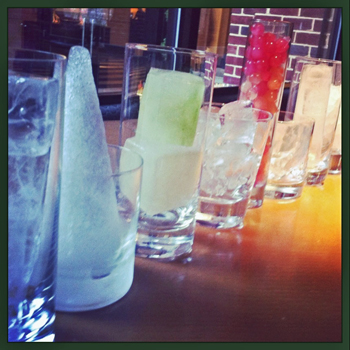 The Four Seasons in Georgetown is introducing a new ice program for its cocktails and other themed offerings as part of DC Cool, a citywide marketing campaign.

Finally, mixologists at the hotel’s restaurant, Bourbon Steak, are brewing up a beverage ice program. “This will take our cocktails to a whole new level,” said Baldassari, “proving that ice does more than keep a drink cool.”

At the Loews Madison Hotel on 15th Street, a new concept restaurant run by Jose Garces, a James Beard award winner and “Iron Chef” TV personality, is taking shape. “Garces will dip his toes in the Washington waters come April,” said David Folkson, the hotel’s director of sales and marketing. “It’ll be a great addition to our hotel and the D.C. food scene.”

The Madison, which last year celebrated its 50th anniversary, is also “bringing back music to the hotel,” said Folkson, with jazz performances on weekends and a piano player on weeknights.

Meanwhile, the Sofitel off Lafayette Square will launch a high-end Sunday brunch this month. “We feel there’s a need for another nice place in our neighborhood,” said Alexandra Byrne, Sofitel’s director of sales and marketing.

The hotel’s ICI Urban Bistro, which offers a contemporary twist on traditional bistro cuisine, will also be introducing a distinct international flavor next spring. In March, a guest chef from Buenos Aires will take over the kitchen, and in July, the Sofitel will celebrate the wine country of southern France with a special menu and bar selections.

Also in March, the Sofitel will showcase the work of an Argentinean photographer. The French-inspired property is renowned for its striking art collection. “We are guided by three pillars — culture, gastronomy, design — in the operation of our hotels worldwide,” said Byrne. “Everything has to be based on them and be linked with French elegance.”

Maciejewski of Destination DC said hotels embody the diverseness of the nation’s capital. “D.C. is really a cool city,” she said. “We want visitors to come and engage with everything the city has to offer” — starting with the hotels.