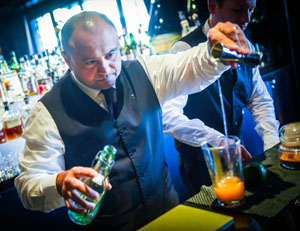 If a hotel bar doesn’t strike you as a city’s scene-defining attraction, don’t worry, you’re probably not alone. Hotel bars have long been known more for their utility than their experience; it might be a place to get a drink, but only because it’s downstairs and you’re willing to settle.

At the Rye Bar in the Capella hotel in Georgetown, head mixologist Angel Cervantes strives to create more modern cocktails.

But as D.C.’s drinking culture has matured and grown more sophisticated in recent years, many hotel bars have opted to up their game instead of resting on their laurels — in much the same way that hotel restaurants have evolved into a distinct dining experience. More hotels are hiring bartenders — or “mixologists” in the new parlance — to design drink menus that both embrace and expand upon traditional cocktails. These same properties are marketing their bars as destinations to tourists and locals alike.

“There’s a cocktail renaissance. You can’t be stuffy anymore. You have to keep up with the bars outside to be able to draw attention,” said Orcun Turkay, director of beverage and mixology at the St. Regis’s bar and restaurant, Decanter. The bar was renovated last year, and Turkay, who came to the St. Regis after a long career at the W, was tasked with developing a beverage program to match the restaurant’s Mediterranean-inspired fare. (Before being Decanter, the hotel’s restaurant was Alain Ducasse’s Adour, which closed in May 2013.)

“Washington has elevated its game in terms of food and beverage. I would say in the last 15 years there’s been a great upsurge in that,” said Hector Torres, general manager of the Beacon Hotel & Corporate Quarters in Dupont Circle and vice president of Capital Hotels & Suites. And as the city’s residents have come to expect more from local restaurants and bars, hotels — many of them located in areas trafficked heavily by office workers or residents — have similarly improved offerings to satisfy their closest clientele.

“This is really a community. This is very local-oriented. We’re very happy to say that we’re sustained, a good portion, by our local clientele,” Torres said of the Beacon’s bar and grille. “We would not survive, frankly, if it were not for local support.” (Turkay says much the same of the St. Regis; while its weekend crowd may consist of wedding parties and tourists, the weeknights are for local office workers.) 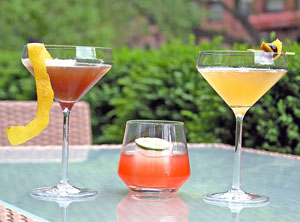 The Rye Concerto, Rye Bar Limeade and Imperfect Martini are some of the summertime concoctions at the Capella hotel.

Torres says it’s that support — and the growing expectations for what a bar and restaurant should offer — that led him to design a creative menu of cocktails and appetizers paired by price increments: The Mint Julep and Gringo Nachos cost $5 each, an Absolut Collins and sweet pea hummus both cost $6, and so on up to $10. The cocktails range from classic to experimental; the Paloma-rita is a margarita made with habanero-infused tequila, while the Portlandia is an inventive take on the Manhattan that includes DC Brau beer, made locally in Washington.

Meanwhile, the St. Regis plays on its history — it opened its doors in 1926 as the Carlton Hotel — to craft a cocktail menu that pays homage to the classics.

Turkay noted that the hotel’s bar was the city’s first wine bar after prohibition ended. As such, he focuses on pre-prohibition cocktails like the Old Fashioned, the Side Car and the Manhattan, as well as seasonal offerings he designs himself (in May, he came up with the Edible Watermelon).

For him, the key is to hew to the originals as much as possible while using high-quality ingredients, including locally distilled liquors like Green Hat Gin, made in a small distillery in Northeast Washington. “We don’t go too crazy with ingredients. Personally, I like simplicity,” he said, noting that four ingredients usually do the trick.

At a recent cocktail class — the third he offered this year — Turkay walked an audience of six through the basics of some of his cocktails, focusing on the theme of egg whites. He taught the group, which included this reporter, how to make a Whiskey Sour and Pisco Sour, as well as two of his own concoctions, one revolving around cherry liqueur, the other around lavender bitters. Each cocktail struck a delicate balance between flavors — fresh lime juice and simple syrup served as a base, while the egg whites added texture and the bitters a pleasant contrast. 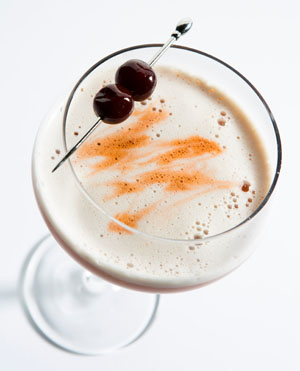 Orcun Turkay, beverage director at the St. Regis, says he likes to keep his drinks simple, with a maximum of four ingredients.

At the Rye Bar in the Capella hotel in Georgetown, head mixologist Angel Cervantes says he strives to create more modern cocktails, which he defines as possessing complexity that drinkers may more often associate with wine. “Modern cocktail making is mixing flavors together and making something new,” he told us.

Cervantes, who has worked in restaurants ranging from Red Sage to Michel Richard’s Citronelle, recently led a cocktail class — which he says are popular with couples — of his own from the bar’s rooftop deck overlooking the C&O Canal and Georgetown Waterfront. Mixing standard bar mixers with a wide collection of rye whiskeys and hard-to-find liqueurs like English shrub (a vinegar-based liquor mixed with fruit), Cervantes produced cocktails like the Rye Bar Limeade (lime juice, rye whiskey, Campari and lavender syrup), Golden Rain (shrub, absinthe, rye, lemon juice, simple syrup) and his take on a mojito, which replaced rum for rye and mint for basil.

Like Turkay and many other cocktail slingers in town, Cervantes says that making the drinks fresh and from scratch matters. “It makes a difference,” he said, and one that more discerning drinkers will notice.

Torres, who has worked in the hospitality industry for 35 years, finds middle ground between Turkay’s simple-is-best approach and Cervantes’s more experimental mixing. “The classics are coming back, but remodified. You’ve got classically inspired cocktails … but very innovatively presented. You play with that experimentation,” he said.

“In many ways, a good mixologist is the equivalent of a damn good chef,” Torres added. “There’s a lot of competition being able to show not only a savviness, but also your taste in creating beautifully prepared drinks that are different or make reference to the past, but they’re your reinvention.”

All of these sophisticated offerings emerging in Washington’s hotel bars reflect a city that has become more exciting gastronomically. Hotel bars and restaurants may not face the same bottom-line pressures as stand-alone restaurants, but that doesn’t mean they don’t have to try to remain on the cutting edge of cuisine and cocktail.

They also have to pay attention to another essential part of any bar’s beverage program: wine. In that department, the Ritz-Carlton on 22nd Street has added convenience to its prestigious wine list to satisfy the most discriminating oenophile.

Starting this spring, diners at the Ritz’s Westend Bistro who want to sample some of the finest wines in the world have the luxury of purchasing them by the glass — not the usual method of by the bottle, thanks to a nifty little gadget.

The Coravin is a sleek-looking device that extracts wine via a thin, hollow needle inserted through the cork, leaving the cork in place. The bottle is pressurized with argon, an inert gas, and when the Coravin is removed, the cork reseals itself and the wine is theoretically preserved because it doesn’t come into contact with oxygen. 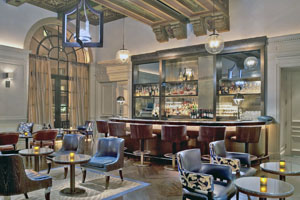 The bar at the St. Regis hotel was the city’s first wine bar after prohibition ended.

The Westend Bistro began using the Coravin this spring. The restaurant’s knowledgeable sommelier, Michael H. Kennedy II, also recently attended Chicago’s Auction of Finest and Rarest Wines and brought back highly sought-after labels to enhance the wine menu. Meticulously stored in a top private cellar since original purchase, the majority of the new wine additions are items that have never gone to auction before, anywhere in the world. Some of the treasures that were acquired include: 1985 Louis Latour, “Bâtard-Montrachet” Grand Cru, Puligny-Montrachet, Burgundy; and a 1971 Bouchard Père et Fils, “Clos Vougeot” Grand Cru, Vougeot, Burgundy.

That Louis Latour will run you a hefty $80 for a three-ounce pour or $160 for a six-ounce glass. But compare that to the $640 that the wine costs per bottle. For a serious wine enthusiast, the chance to try more than one world-class vintage without having to purchase an entire bottle may be worth the price.

“To our knowledge, no wine program in the country is offering wines of this caliber and age by the glass,” said Kennedy.

The fierce competition among the city’s upscale hotels has opened the floodgates on inspired beverage offerings designed to attract everyone from the refined wine collector to the hipster office worker looking for the latest hand-made craft cocktail. It’s a stirring evolution, as D.C.’s hotel bars have transformed from utilitarian watering holes to intoxicating oases of invention.