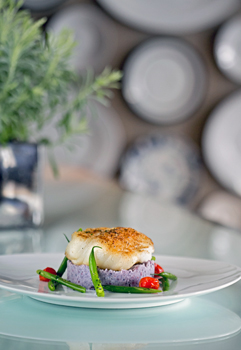 Jardenea, which derives its name from the French word for garden, specializes in fresh, local, organic dishes as part of its farm-to-fork approach.

There is a well-kept secret in Foggy Bottom. Tucked away in an inconspicuous corner of the newly renovated Melrose Hotel on Pennsylvania Avenue, Jardenea is a talented newcomer that’s plating out beautiful and flavorful dishes for lucky hotel guests and local diners who have discovered the secret.

When Remington Hospitality Services undertook its distinctive revamp of the Melrose Hotel near Georgetown, they set out to create a restaurant that matched the elegantly chic new feel of the boutique property. To do that, they brought in a team from their One Ocean Resort and Spa in Atlantic Beach, Fla. Culinary Director Ted Peters and executive chef Nate Lindsay, previously from Azurea, the acclaimed restaurant at One Ocean, hope to repeat their success in Washington by making Jardenea a refuge for hotel guests and a destination dining spot for area residents.

Though newcomers to D.C., Peters and Lindsay are well versed in the slow food paradigm prevalent in Washington fine dining. They describe Jardenea’s farm-to-fork take on the concept as “inventive, current and conscientious.” (Jardenea derives its name from the French word for garden, jardin.)

The menu sections called Farm, Fields, Flight and Fins showcase ingredients obtained from local and regional sources that are preferably organic and environmentally sustainable. Chef Lindsay explained that he works with area producers to get what he needs for planned dishes and creates new dishes that highlight what they have available. He acknowledges that sometimes ingredients for a specific dish are not available locally, in which case he looks for sources from outside the area that are produced organically and sustainably. While it is obvious that many farm-to-table restaurants cannot solely rely on locally sourced ingredients, it is nice to see a chef being refreshingly honest about that point.

Seasonality is a key part of the slow food concept, and Lindsay incorporates it on two levels. He uses seasonally available ingredients whenever possible but also builds dishes that are appropriate to the season, and varies the menu accordingly. Currently on the Fields section of the menu, for example, is a rich garnet yam gnocchi prepared with Meadow Creek Dairy Grayson cream (a semi-soft goat milk cheese out of southwestern Virginia), cippolini onions and toasted pecans. With a slight sweetness and hint of cinnamon, the dish has an almost festive feel that is perfect for chilly, wet weather. Although warmer weather will be welcome, it will be a pity to see the gnocchi go when the menu changes to feature spring dishes. The duck entrée from the Flight part of the menu is another hearty dish, with the crisp-skinned breast joined by mergueze sausage, braised kale, and a dense black eye pea cassoulet.

Another dish well suited to cold weather, the juniper-scented venison rack is paired with tart huckleberry compote and one of Lindsay’s most interesting creations, a savory brioche bread pudding made with foraged mushrooms.

Lindsay spent several years in tidewater Maryland, which perhaps accounts for his inspired handling of the blue crab in his Chesapeake Bay crab bisque. Somewhat lighter than many versions, it is slightly spicy and, with a touch of roe, ever so faintly fishy. Sliced shitake mushrooms sourced from Basciani farms in Avondale, Penn., impart an interesting flavor and textural contrast to the lump crabmeat, while tracings of chive oil broaden the bisque’s appeal. Likewise, Lindsay’s Maryland crab cakes, paired with sweet corn, piquillo peppers, cilantro and fried green tomatoes, are more complex than traditional renderings. 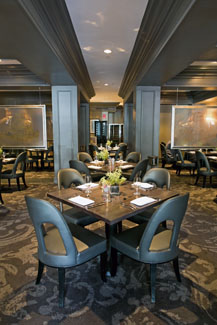 Lindsay’s time in coastal Maryland and Florida is also reflected in his skilled handling other fish and seafood dishes. He pairs spiced ahi tuna with a citrus ratatouille, while the grilled wild salmon mignon is served with caponata eggplant and arugula tarragon vinaigrette — both intriguing combinations. But the Hawaiian sea bass is particularly well done. A pan-seared skin-on filet is dusted with a mix of coriander, fennel and white pepper, and accompanied with blue corn grits made of gorgonzola vin blanc. Among the starters, the Maine scallops — cast-iron seared and served with fava bean succotash, Indian corn broth and fennel pollen —are a good choice.

On the vegetarian side, several grain-based dishes appear in the Fields section in addition to the gnocchi. The risotto at Jardenea is particularly striking. Instead of rice Lindsay uses golden farro, a short grain type of wheat. Seasonal vegetables, grapes and Marcona almonds meld nicely together in this satisfying vegetarian option. For an even more decadent offering, the pappardelle, hand rolled in house, is prepared in a rich carbonara style with house-smoked bacon, fresh English peas, Lancaster County eggs and parmesan broth. 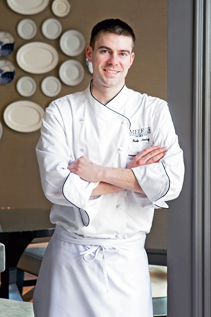 Though not from the South (Lindsay grew up and went to culinary school in Connecticut), a southern streak runs through Lindsay’s menu with sides like grits and collards appearing in various dishes. Lindsay’s collards, in fact, are a perfect balance of sweet and sour and are some of the best we’ve ever sampled.

Presentation is a key component of Lindsay’s approach. The Jardenea Caesar salad, for instance, is a deconstructed version with napkin ring-shaped brioche encircling tender, tiny romaine leaves that are finished lightly with a white anchovy-pecorino dressing. Demonstrating the imaginative side of the Jardenea formula, the BLT starter features lobster salad and avocado puree with a crisped round of pancetta over Bibb lettuce and heirloom tomatoes atop a ciabatta crostini.

Currently desserts are not a major item on the menu, but what is available is good. On a recent visit, a dark chocolate cake with a melting ganache center and an eggy strawberry vanilla crème brûlée were the choices.

The beverage program, on the other hand, is well developed, with original cocktails and martinis crafted using house-made fruit consommé infusions, as well as a wine list that changes seasonally and a small list of beers.

The executive chef at a hotel like the Melrose is responsible for the entire food program — that means three meals a day in the dining room, ongoing room service and banquets. Despite the harried schedule, Lindsay is eager to accommodate his diners, adjusting dishes to meet vegetarian, vegan and special dietary requests. This attention to customer service is present throughout Jardenea. Restaurant manager William Rabil strives to make sure Jardenea is everything a tired traveler would want after the trials of lost bags, long security lines and missed flights, though staff go out of their way to accommodate out-of-towners and locals alike.

Just about the only challenge with Jardenea is finding it. There is currently no outside signage telling you there is a restaurant inside the hotel, and there is no separate entrance. Moreover, when you enter the hotel, there is no sign indicating where the restaurant is, and the lounge space outside the dining area, with its low tables and long communal tables, flows into the rest of the lobby without clear demarcation.

It would be a pity if this lack of presence prevents potential diners from finding Jardenea and experiencing Lindsay’s interesting work. Farm to table is, by now, not a novel dining approach, but his choice of ingredients and the way he puts them together help him stand apart from a crowded field of talented chefs in the area. Just as Jardenea refers to the French word for garden, Lindsay has brought a fresh new style to a revitalized hotel.