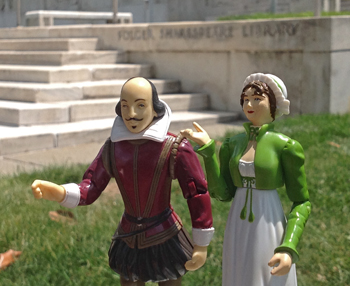 Action figures of William Shakespeare and Jane Austen sit on the front lawn of the Folger Shakespeare Library.

Isn’t that how many of us distilled the Bard’s array of plays, with their kings and fairies, and how we recalled Austen’s early 19th-century novels, whose heroines avoided a host of suitors, both suitable and unsuitable, to find true love?

You’ve probably rethought those initial clichéd reactions through the course of encountering the Bard’s deft use of the English language or embraced Austen’s astute observations of English social mores. Though their lives and work were vastly different, the two literary greats share one thing in common: a spectacular afterlife.

“Will & Jane: Shakespeare, Austen, and the Cult of Celebrity” is the lavish, beguiling new exhibition at the Folger Shakespeare Library that celebrates the forever fame these two historic figures enjoy.

Holy Kardashian! The Bard and Jane as celebrities?

But it’s true, each in their own fashion. One look at the countless film and TV adaptations their books and plays have inspired is proof alone of their enduring celebrity. But their superstar status stretches back even further, with the Folger presenting a variety of souvenirs, rare books, manuscripts and other materials from the 1700s to the present.

The exhibition feels like rummaging through your grandparents’ attic, crammed with curiosities from the past. “Will & Jane” features porcelain figurines; a copy of Austen’s novel “Emma” owned by her sister; pages from an Oscar-winning screenplay or two (Emma Thompson’s “Sense and Sensibility” and Tom Stoppard’s Oscar-winning “Shakespeare in Love”); paintings; advertisements; a lock of Austen’s hair; a mulberry goblet said to be made from the wood of a tree planted by Shakespeare; and gravestone rubbings of both authors’ tombs. 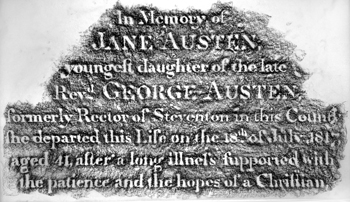 Gravestone etchings of the tombs of William Shakespeare and Jane Austen are among the myriad items in a new Folger exhibit.

Both authors were glorified and commercialized over the years. The parallels, in fact, are striking. This year marks the 400th anniversary of Shakespeare’s death, and 2017 will be the 200th anniversary of Austen’s. Part of the fascination with both writers stems from the fact that while they produced considerable literary output, very few personal details about them exist. They don’t lack for biographical books, films and essays written about them and their works, but hard-core, solid information about their personal lives is sparse. That may account for why, in Shakespeare’s case, there are more books about who really wrote Shakespeare’s plays than there are genuine biographies about the man.

Be that as it may, the two super-authors remain celebrities in the modern age, which brings along with it idolatry, critical and uncritical, and a long line of attempts to enlarge, explain or improve upon their work.

The exhibition, helpfully laid out like a map into sections, begins with George Romney’s oil painting “The Infant Shakespeare Attended by Nature and the Passions,” which looks like a richly painted Nativity scene — a preview of the deification of Will and Jane.

Images of Austen, meanwhile, include a triptych of portraits that go from stern to plain to pretty. Speculation on Austen’s love life — and looks — abounds. Even the married Shakespeare’s love life is shrouded in mystery. Since so little is known, writers have been known to conjure romance for their subjects — hence a famous forged letter to the Bard’s wife Anne Hathaway.

There is a kind of arc of connection between Will and Jane. Shakespeare’s journey to fame began in 1769 when actor and theater manager David Garrick organized a Shakespeare Jubilee in Stratford-upon-Avon, which included horse races, plays, concerts and picnics. This began the process of cultivating celebrity status for Will, and the artifacts on display here include an advertisement for a horse race, a lottery ticket and commemorative medallions that included the famous “we shall not see his like again” quote. This jubilee paraphernalia was followed by the premature opening of the Shakespeare Gallery, with life-size paintings of scenes from the Bard’s plays and a gift shop. Financially, the museum was a bust and the building was eventually demolished in 1870.

a lottery ticket for the Shakespeare Gallery

Austen had occasion to see Shakespeare’s plays during that period and she even wrote a letter — on view here — smartly critiquing a production of “The Merchant of Venice” that she had seen. Although her own works were popular and well-received during her lifetime, Austen had to wait a little longer to achieve the kind of popularity that would normally surround literary celebrity. In the 1990s, BBC televised its production of “Pride and Prejudice,” which sparked an Austen revival in television and film, created a fandom world and made household names out of people like Gwyneth Paltrow and Colin Firth (whose shirt he wore in the “lake swim” scene during the BBC miniseries is included in this exhibit).

There is a certain kind of madness when an esteemed institution such as the Folger fondly reminisces about Mr. Darcy jumping into a lake and getting his shirt transparently wet for fans of “Pride and Prejudice.” Just how modern is Jane Austen? Her classic novel was yet again reimagined in this year’s horror flick “Pride and Prejudice and Zombies,” which did quite well at the box office.

Like Austen and Shakespeare, Charles Dickens also had a unique capacity to create stories that leapt into the popular imagination, but Tiny Tim, Oliver Twist and even the autobiographical David Copperfield never bestowed celebrity status on Dickens, even though he toured to perform his work.

Yet Hamlet, Macbeth, Elizabeth Bennet, Emma Woodhouse and a host of other legendary characters gave their creators a lasting voice, which continues to speak to us today. And there seems to be no stopping this popularity for generations to come. During a tour of “Will & Jane,” a girl visiting the exhibition was asked if she had read Austen’s novels, to which she replied yes. “I like the characters very much,” said the young girl, who couldn’t have been more than 10 years old.

Will & Jane: Shakespeare, Austen, and the Cult of Celebrity