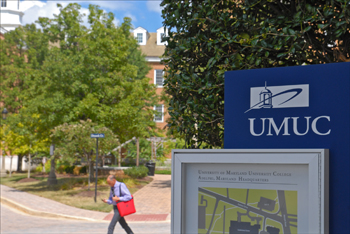 Over the next 12 months, Adelphi-based UMUC plans to abolish another staple of college life — textbooks — saving its 85,000 students millions of dollars in the process.

The University of Maryland University College (UMUC) campus is based in Adelphi, Md.

“Traditionally, if you were to take a course, you had to buy a textbook. But that’s a very old way of doing things,” said UMUC President Javier Miyares. “Let’s get rid of textbooks and instead ask what are the best open, freely available resources out there.

Miyares, in a recent interview with The Washington Diplomat, said “publishers today know that textbooks are a dying breed,” which is why they’re instead “modularizing” textbooks so that instructors can choose what they want. “And if we cannot find what we’re looking for,” he told us, “we’ll buy the required module.”

Founded in 1947 as part of the University of Maryland, its purpose was to extend higher education to married World War II veterans who couldn’t be accommodated on campus. Two years later, the Pentagon contracted UMUC to offer classes to U.S. troops in Europe. Later, the college expanded its overseas operations to Vietnam, Iraq, Afghanistan and wherever American soldiers are stationed — including Germany, Belgium, Italy, Portugal, Spain and Great Britain.

What began as a resource for World War II vets has evolved into a global education leader. Last year, the university’s overseas divisions offered on-site classes in more than 25 countries and territories throughout the world, enrolling over 27,000 students in undergraduate and graduate programs in Asia and Europe.

In 1991, UMUC also began the first joint programs with a Soviet university, one in Irkutsk and the other in Vladivostok. That program still exists, as does another in South Africa, where UMUC shows faculty how to teach online. In addition, UMUC offers a master’s of distance education degree in partnership with Germany’s University of Oldenburg.

One place UMUC doesn’t have operations is Cuba, home to the U.S. Naval Station at Guantánamo Bay. Cuba is also the birthplace of Miyares, who fled the island July 4, 1961, at the age of 15, shortly after the triumph of Fidel Castro’s communist revolution.

“My father was a political prisoner, so the Jesuits sent me to Venezuela,” recalled Miyares, a native of Havana’s La Vibora neighborhood who had attended the same Jesuit high school as Castro. After fleeing the island and spending half a dozen years bouncing between Miami, the Dominican Republic, back to Venezuela and finally to Puerto Rico, he joined his brother in Baltimore in 1968.

“I then enrolled in College Park and ended up in the same business as my father and mother: education. I also had four or five uncles who were teachers,” he said.

Miyares, whose 35 years of higher education experience includes employment with the Maryland Higher Education Commission and the University of Maryland, joined UMUC in 2001 and became its president in October 2012.

In June, Miyares proudly accepted the Educator of the Year Award from the World Affairs Council at the group’s 35th annual fundraising gala. 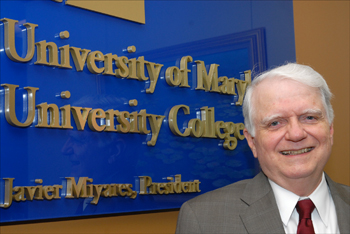 Javier Miyares, president of the University of Maryland University College since 2012, says that the “traditional college experience is not traditional anymore.”

In his acceptance speech on behalf of UMUC, the college president noted that overall, the cost of higher education is up, funding is down and demographics are shifting.

“The reality is that the traditional model of higher education is not scalable to meet the demand at an acceptable cost. Thus, it is no surprise that the so-called traditional college experience is not traditional anymore,” he told attendees at D.C.’s Ritz-Carlton hotel. “Students just out of high school who attend college full time and live on campus are now the minority.”

Three recent developments, he said, have converged to create the potential for learning experiences that are far superior to traditional models: online technologies, big data and learning science.

“Today, the classroom is untethered by time and space. In the mid-1990s, UMUC was among the first institutions in the world to see the potential of the internet to make education more accessible,” he said. “Today, we have some 250,000 online course enrollments each year — more than any public university.”

Meanwhile, Miyares — a former associate vice chancellor for finance and administration with the University System of Maryland — said the power of big data is being applied to higher education. For example, on the first day of an online class at UMUC, data analytics can predict, with better than 85 percent accuracy, whether a given student will pass or fail.

Finally, he said, “adaptive learning, which utilizes intelligent software that interacts with the student and facilitates learning, carries the promise of individualized yet scalable education. We have also adopted open-source, online educational resources in place of traditional textbooks, resulting in significant cost savings for our students.”

But UMUC students also have fun too.

Earlier this year, the college’s Cyber Padawans captured first place in the Cyber DiploHack, an event co-sponsored by the Royal Netherlands Embassy and the Center for Strategic and International Studies. UMUC defeated five other teams from Georgetown University, George Washington University, England’s Oxford University, France’s Chaire Castex and Delft University of Technology in the Netherlands.

UMUC also has a relationship with the Japanese Embassy, due to its heavy presence on Okinawa, home to 26,000 U.S. troops.

“Beyond that, the online classroom provides a unique opportunity to bring people from different countries together in a very cost-effective way,” Miyares explained. “Our Russian students take business classes with American students. If we do that with more countries, I think we’re providing a hell of an education by bringing a true international perspective to the online classroom experience.”

The most common majors at UMUC — there are over 90 degrees, specializations and certificates — are business management and technology. UMUC also has the nation’s largest history program, with twice as many students enrolled in its undergraduate history program than does the University of Maryland.

“For quite awhile there’s been a narrative out there that college has become very expensive. That has discouraged new immigrants and minorities to think college is not for them,” said Miyares. “We want to push back with another narrative: If you choose the right path, college can become not only affordable, but you can do it without debt. Go to a Maryland community college and then come to us.”

Very few students, in fact, start out at UMUC as freshmen. Those who go to an in-state community college and then transfer to UMUC can qualify for a scholarship program that allows them to earn a four-year degree for only $20,000, Miyares said, adding that “we have the second-lowest tuition of any four-year public or private institution in Maryland. After budget cuts, we may be the lowest.” 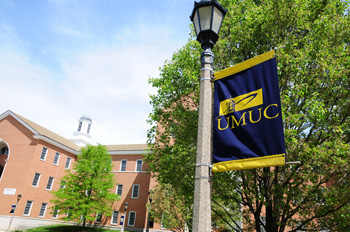 The University of Maryland University College recently enrolled 85,000 students from around the world.

About three-fourths of UMUC students are undergraduates, Miyares noted. Their average age is 27, and more than half are active-duty military, their family members, veterans or reservists. UMUC is also ethnically diverse, with 43 percent of its students belonging to a minority; it’s home to more Hispanics than any university in Maryland.

“When online education came about, it really was the beginning of an evolution in how we teach. At first, the same lecture you heard on site was posted, and then you had discussion groups. Now we’ve introduced things like adaptive learning and intelligent software that interacts with students and knows where they’re weak,” he explained.

“It is literally impossible to graduate from UMUC without taking online courses,” Miyares told The Diplomat. “We used to have face-to-face operations, particularly stateside. But students said they’d rather study online because they didn’t want to fight Beltway traffic. In the mid-1990s, we saw this huge migration from on site to online.”

By fiscal 2012, UMUC reached its highest enrollment ever — 97,000 students — thanks to military tuition assistance and help from employers as well. But with the withdrawal of U.S. troops from Iraq and Afghanistan, enrollment began shrinking.

“In two years, we had to cut our budget by $60 million, and we had to terminate 300 people, mainly overseas” out of a total 4,000 full-time and part-time employees, said Miyares. “We went through a rough patch. In this area, you either work for the government or for a federal contractor. The government shutdown affected military tuition assistance, and the sequestration cut the defense budget tremendously.”

But Miyares concedes that the budget drama may repeat itself this fall when Congress scrambles to pass the annual appropriations bills funding the government. Partisan bickering over issues ranging from abortion to Iran means that another shutdown looms large — a scenario that keeps Miyares up at night.

“I hope they solve their problems, because once you have a shutdown, it has an impact on us,” he warned. “You have to plan for the worst.”