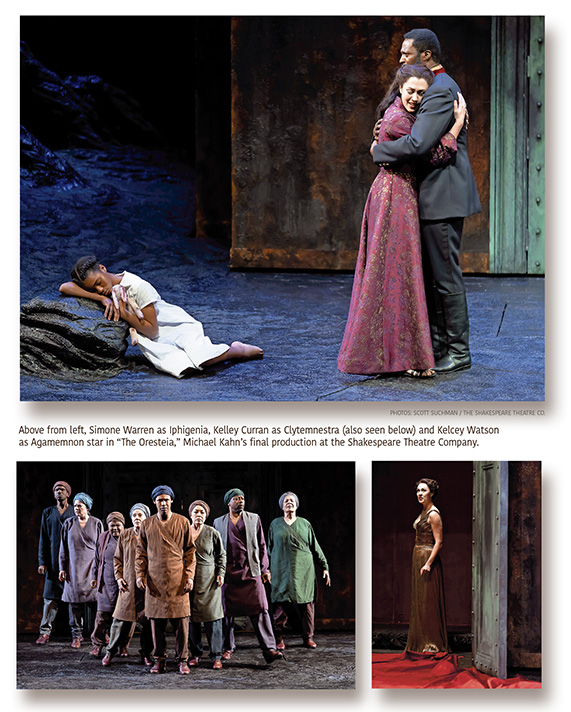 Amazing, isn’t it, how much we still have to learn from the Greeks. The Shakespeare Theatre Company’s inspired production of Greek playwright Aeschylus’s “Oresteia” — the earliest dramatic trilogy in the Western canon — reminds us that we have only partly learned the lessons this ancient theater originator (who was also a soldier) had to impart. Chief among them are that violence begets violence and that justice and retribution are not synonymous.

You might think we would have come further since “The Oresteia” premiered in Athens some 2,500 years ago, but a look at almost any newspaper (or internet) headline tells a different story. Fitting, then, that retiring STC Artistic Director Michael Kahn — who has spent a three-decade-long career reminding us of the power and relevance of live theater — should take us back to the very origins of the genre to mine its lessons as he exits the stage. His vision and leadership will be greatly missed.

The Shakespeare’s production of Aeschylus’s classic trilogy is an adaptation by Kahn’s occasional collaborator Ellen McLaughlin, condensing the three plays (“Agamemnon,” “The Libation Bearers” and “The Eumenides”) into a powerful single three-act evening.

One is immediately struck by the monolithic structure that dominates Susan Hilferty’s set and provides the background to all of the action: the House of Atreus, which is a character in itself, glowing red when blood is shed, as it often is in this story of vengeance, retribution and the search for justice.

While McLaughlin has of necessity eliminated some elements and figures of the trilogy — Queen Clytemnestra’s lover Aegisthus is absent, and the gods play a smaller role in human affairs — she has kept a steady focus on the deadly cycle of vengeance and its effects both on those who perform it and those upon whom it is performed. Chief among these are Kelcey Watson’s Agamemnon, just returned from the Trojan War; Agamemnon’s longsuffering wife Clytemnestra, played by Kelley Curran; and Agamemnon’s psychologically tortured son Orestes, played by Josiah Bania. In this epic story of a wife’s revenge on her husband and a son’s revenge on his mother, McLaughlin adds a flashback to what began it all more than 10 years earlier: General Agamemnon’s sacrifice of his and Clytemnestra’s daughter Iphigenia in return for the gods’ favor in the war against Troy.

From the very beginning, we are drawn into the shock and poignancy of the dilemma these parents face. Agamemnon must choose between disaster in the war and his daughter’s life; Clytemnestra between revenge for what her husband has done or acceptance of the gods’ demand. Watson movingly presents Agamemnon as a good man forced into an untenable situation, with no way out. Curran’s Clytemnestra, by contrast, is all fury and deliberation, a mother stripped of motherhood, who will exact a terrible price for the loss of a child and of her power.

The first half of the evening belongs to Curran, whose nightmare-haunted yet majestic Clytemnestra plots, curses and shares the intimate, surprisingly humorous, moments of an over-taxed mother’s life — one whose partner has been AWOL for the past 10 years. Clytemnestra’s dark, caustic humor and Curran’s perfectly droll delivery are a highlight of the evening, making the injured queen a sympathetic, even likeable, figure despite her distasteful designs.

By contrast, Bania’s Orestes takes no joy in plotting his mother’s death as vengeance for the murder of his father. Driven to psychotic fits by the god Apollo, he, like his father, is forced to do a terrible thing he does not want to do. Like both Agamemnon and Clytemnestra, he is trapped by circumstance. Through Bania’s sympathetic portrayal, Orestes’s awful dilemma comes to life: We see a man almost literally divided against himself, knowing there must be another way out, but incapable of seeing it. The furies of his conscience simply will not let him go.

As Orestes’ surviving sister, Electra, Rad Pereira brings earthiness and solidity to Orestes’s geographic and psychological peregrinations. She tends her father’s tomb, just in front of the House of Atreus, and honors his memory through the “long sweaty job of keeping hatred alight.” Yet she acknowledges that her hatred has blocked out the blue of the sky and the stars at night, while hinting that vengeance may not be the panacea she has imagined. Pereira endows the orphaned figure with a nuance and complexity that is tamer but no less powerful than Orestes’s own.

It may be the Chorus, that staple of Greek drama infrequently seen in modern theater, that most commands our attention as the story progresses. It is they who offer a primal wisdom we all recognize, and they who pepper the universe with the questions we all wish to ask. “We learn nothing except through suffering,” they ruefully lament early on. Elsewhere they ominously acknowledge that “[t]he past does not forget us.”

While that may be true, the Chorus does not allow itself to be bound by the past. It is the one character (or characters) that probes the walls of the House of Atreus for another way out. “Can we clean this house?” they ask in refrain several times over the evening. Dressed in drab smocks and differently colored turbans, the ethnically diverse, eight-member Chorus are indeed the housekeepers of this haunted place, cursed by cyclical violence.

“We have to find a way forward,” they insist, and what results in Act Three, after Orestes’s murder of Clytemnestra, is not more retribution — the impulsive response to an impulsive first move — but dialogue and debate. This is the supposed historical purpose of Aeschylus’s trilogy, to explain the origins and usefulness of trial by jury and the system of law in response to ancient blood feuds and personal vendetta.

Here, the propulsive momentum of the first two acts seems to slow, the turn from action to debate appearing almost premeditated. If one gets the uneasy feeling of being back in school, that may be the point. It almost certainly was for Aeschylus. This final act is in a sense teaching us: See, there’s a better way to handle our disagreements than picking up a sword. Or a gun. Or a nuclear weapon. Or even simply defaming another person. The way forward for the guilty Orestes and his co-conspirator Electra is to be heard by a jury of their peers, to be given the opportunity to tell their side of the story and be judged accordingly. It seems fitting that the Chorus should be the ones to sit in judgment, debating among themselves the just and right thing to do. Their debate, about the very nature of justice, is what will (almost literally) clean the house and Orestes and Electra, too.

In his artistic farewell to a city that thrives on power, in a time of confusion about ideas like justice and retribution, it is fitting that Michael Kahn has given us such an eloquent statement of theater’s own ancient power to prod, provoke, question and often disturb us in our seats. Now he leaves the stage for us to debate that power, both past and present.

Deryl Davis is a contributing writer for The Washington Diplomat and an adjunct professor of drama, literature and film at Wesley Theological Seminary in Washington, D.C.