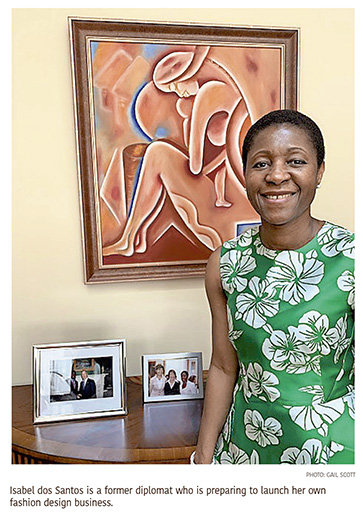 UPDATE: Since this story went to press, a second cyclone named Cyclone Kenneth hit the country, causing several dozen additional deaths (which are expected to rise) and intense rainfall and flooding that could potentially put 700,000 people at risk. It marks the first time in recorded history that the southern African nation has been hit by two cyclones in one season.

Isabel dos Santos, wife of Carlos dos Santos, the ambassador of Mozambique, was not in her homeland in mid-March when Cyclone Idai ravaged Mozambique, as well as Zimbabwe and Malawi, in what was one of the worst weather-related disasters to ever hit the Southern Hemisphere.

But she was there when massive flooding inundated Mozambique in 2000, killing hundreds. The disaster was compounded by Tropical Cyclone Eline, which lashed the country with 160-mile-per-hour winds.

“I still remember what it’s like,” Isabel, a former diplomat herself, told us. “I was 19 and living at home. Most of our house was hit. We had no electricity, lots of flooding. I remember how a little girl was born in a tree. It was scary,” she said, noting that many people were trapped. “They said, ‘This is my home. Where would I go?’”

She said her Portuguese-speaking nation of 30 million is used to flooding and cyclones, especially with its expansive Indian Ocean exposure. Climate change has also increased the severity and frequency of extreme weather events.

“Every January there’s a lot of flooding; it is the rainy season from October to March. Every cyclone is not as destructive. Sometimes it just rains. Coastal countries like ours are constantly hit by cyclones. We never know how strong it will be. We’ve had four strong ones in my lifetime.”

And this latest one, Idai, could break all records. The cyclone made landfall near the port city of Beira in Mozambique, home to 500,000 people. According to reports, the Category 3 storm decimated 90 percent of the city.

While the neighboring countries of Zimbabwe and Malawi were also affected, Mozambique bore the brunt of the powerful storm. As of press time, the death toll stood at over 1,000. Nearly 2 million people in Mozambique need humanitarian assistance, according to the U.N. The country is also bracing for a cholera outbreak, with 4,000 documented cases so far. The World Bank estimates that direct economic losses from Idai range from $656 million to $773, potentially setting the country’s development back years.

While Mozambique has enjoyed strong economic growth over the last two decades and is rich in natural resources, poverty remains widespread and infrastructure is weak, making the country more vulnerable to natural disasters.

Exacerbating the problem is economic mismanagement by the government, including corruption and failing to invest energy revenues into rural areas. All of that has made donors hesitant to give the government money.

But the need is acute because of Idai. The United Nations has appealed for $133 million over the next three months to help with initial recovery efforts, which are sure to continue for years to come. The country hasn’t even fully recovered yet from Eline back in 2000.

Isabel said her country is relying on help both large and small — from international organizations such as the U.N. and IMF and World Food Program, as well as from average Mozambicans.

“We recover with love by helping each other. Here in Washington, the embassy supports the small but enthusiastic Mozambican community in Maryland, Virginia and the District. We created a GoFundMe page under www.gofundme.com/f/cyclone-idai-fundraiser-for-mozambique so others here can help, too.

“Automatic help comes from our National Institute of Disaster Management and our Ministry of Foreign Affairs and Cooperation, which coordinates foreign aid,” she added.

“It’s the people, that’s what’s unique about Mozambique, a former Portuguese colony,” Isabel told us. “Everyone is very friendly and caring. They will always go the extra mile to help you, to make you happy. They care about everyone; neighbors are our family. That’s how we all grew up.”

Maria Isabel dos Santos was born and raised in Mozambique and began her diplomatic career in 1984 at the Ministry of Foreign Affairs. For the rest of the decade, she worked at the Higher Institute of International Relations in Maputo, Mozambique’s capital. For the following two years, she was a protections assistant for the United Nations High Commissioner for Refugees. “I especially enjoyed my work with UNHCR and the refugees,” she noted. Her final assignment with the Foreign Affairs Ministry was with Mozambique’s National Demining Institute.

“Then I married and left the ministry and everything changed,” she said.

Her husband, Carlos dos Santos, assumed his first ambassadorial post in 1996 as Mozambique’s permanent representative to the United Nations and the couple moved to New Rochelle, just outside of Manhattan. She stayed at home with their two youngest children, Vanessa, 14, and Helio, 4, while their older daughter Regina was just starting at New York University.

While there, Carlos was named secretary-general of a convention to ban landmines, an issue close to his heart because of the millions of mines planted in Mozambique during the civil war that raged from 1977 to 1992. He also worked to stop small arms proliferation, another vital issue in his country.

In 2003, the family returned to Mozambique so he could serve as a presidential advisor, and then left again in 2006 for Germany, where her husband served as ambassador. He later became high commissioner to Great Britain in 2011, as well as ambassador to Ireland, before coming to Washington in 2016.

“Settling in Berlin was difficult due to the language barrier. I had to restructure my life and find interests to stay occupied,” Isabel recalled, admitting that she missed her own career.

Encouraged by one of her aunts, she decided to explore the artistic side of her family, so she turned to something that her mother and five aunts did for a living: sewing.

“I started to take a special interest in sewing and designing. Now, they are my passion,” she said. “In Germany I bought a sewing machine and made patterns. My aunt encouraged me to take my sewing seriously…. I even got a job in a little boutique where everything was very expensive.” 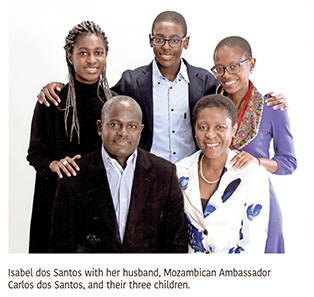 When the couple moved to Britain for their next posting, “I was able to study dressmaking and design for 18 months,” Isabel said. “In London, I met and interned for Yemi Osunkoya, founder and designer for Kosibah, a well-known bridal couture house based in London and New York. He became my mentor.”

In 2017, Isabel went to Rome for three months to intern at Elvira Gramano, another well-known maker of bridal dresses.

Now, she is ready to open her own design business, although it will have to wait until her husband finishes his posting here. “As long as I don’t pay taxes in the United States, I can’t work here. In the meantime, I will design and sew for my friends and family,” Isabel said.

However, she has already registered her brand, Isabel Matini, back in Mozambique.

“I am now choosing fabrics from here, Africa and Holland; it is so easy to get wonderful fabrics from the Netherlands. This month I’m looking into manufacturing in Portugal and China, where fabrics and labor are more affordable,” she explained. “My business will be based in Mozambique and my fashions will be sold online everywhere. I expect to open my business by the end of this year.”

Her collection will range from $100 to $300 per item. “I hope to have a major fashion show of 15 pieces within the year. I have a friend, Alcinda Honwana, who makes contemporary African jewelry and I would like to have her designs shown with my collection. After my clothes take off, I plan to add shoes and bags from Italy.”

Isabel, with a ready smile and short, cropped hair that she styles herself, always dreamed of a career in fashion. “I used to tell my mother, ‘This is what I want. Can you do this?’

“When I was growing up, I never thought, even guessed, that I would end up doing this. Now I dream about designs. Sometimes, my imagination even keeps me awake at night.”

Even though Isabel knows what she wants to design, “it is very difficult to sew for yourself, especially when it comes to the fitting. I have to get my daughter or a friend to help me,” she said.

“I really enjoy seeing women well dressed,” she added. “I look all the time at how women are dressed, on the street and in the shops. Sometimes I think that they would look better if they only wore this or that. Often a look has already been created but I want to make it better. In Mozambique, it will be a special thrill for me to see women from different parts of the country wearing my designs.”