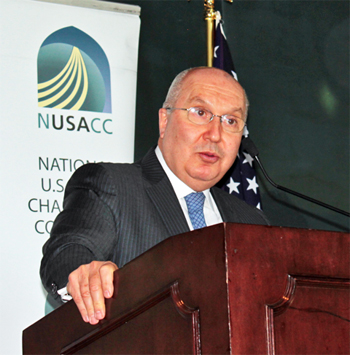 For the first time in its 11-year history, the National U.S.-Arab Chamber of Commerce’s Ambassador of the Year award has gone to a Lebanese diplomat: Antoine Chedid.

NUSACC presented Chedid with the prize Dec. 8 at a luncheon attended by more than 100 business and government leaders at Georgetown’s Ritz-Carlton hotel.

“Let me thank NUSACC for hosting this event and for honoring me with this prestigious award, which I will cherish dearly; it will occupy an important place in my heart and in our home,” said Chedid, who is departing his Washington post after having served as Beirut’s top envoy here since July 2007.

Chedid noted that the first Americans came to Lebanon 180 years ago, and the first Lebanese arrived on U.S. shores 25 years later.

“Americans and Lebanese admire freedom and tolerance, democracy, the right of free expression and the support of civil rights. The partnership between Lebanon and the U.S. dates back many years and continues to grow,” Chedid said, adding that Lebanon’s 4.4 million inhabitants — and the many millions more living in the diaspora — are known for their innovation and business savvy.

“The Lebanese are farmers and fishermen, bakers and builders, professors and processors, actors and attorneys, poets and especially politicians,” he said. “But if you scratch a Lebanese, you will find our real identity as bankers, and especially merchants. It is as such that our international role can be understood, a role for which Lebanon has received world renown. Our commercial and entrepreneurial roles are still our trademark.”

As Amin Salam, NUSACC vice president of business development, noted, “Lebanon is neither measured nor defined by size or population, [but] by the resounding success of its people across the world — in every continent and in every trade.”

Despite Lebanon’s turbulent past, including the 1975-1990 civil war that killed over 100,000 people, Chedid said his multiethnic country has overcome hardship and boasts a well-educated, capable and innovative population; a strong banking sector that has outperformed all other sectors; a service-based economy; a free-market environment; and a resilient private sector.

“Like the legendary Phoenix,” he said, “Lebanon has always emerged from the ashes and has steadily regained its former vitality.” 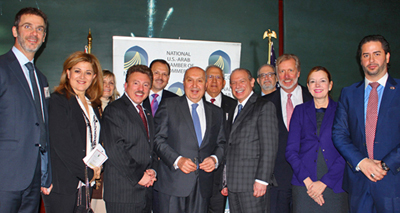 David Hamod, president and CEO of NUSACC, praised Chedid and his wife Nicole for their “gracious hospitality,” observing that “Lebanon has faced more than its fair share of challenges over the years, but Tony has met these challenges with grace, dignity and aplomb.”

The room was filled with dignitaries, including numerous current and former ambassadors who came out to toast the popular envoy.

“You have had a major contribution to the building, consolidation and expansion of the trusted partnership we enjoy with the United States through your work with the U.S. State Department, Congress and officials of many other key institutions,” wrote Lebanese Prime Minister Tammam Salam. “The credibility you enjoy has been instrumental in this accomplishment.”

Added Secretary of State John Kerry: “Your personal advocacy on key issues has had a meaningful impact, from securing greater assistance to the Lebanese Armed Forces to your efforts in the coalition to fight extremism to supporting the communities in Lebanon hosting Syrian refugees. This richly deserved award recognizes your outstanding efforts over the past eight years in advancing U.S -Lebanese relations at a crucial time in the region.”

Kerry’s letter was read aloud by Gerald Feierstein, principal deputy assistant secretary of state for Near Eastern affairs. Feierstein added some appreciative words of his own: “Thanks to Ambassador Chedid’s dedication and work, the relationship between Lebanon and the United States has never been stronger. And I am sure that the strong foundations he has laid here in the United States will allow our two countries to make further strides together, particularly as Lebanon faces enormous external and internal challenges.”

The audience also heard from former Transportation Secretary Ray LaHood, who called Chedid “by far the strongest, best ambassador to serve Lebanon in Washington,” while Salim Zeenni, president of the American Lebanese Chamber of Commerce in Beirut, thanked Chedid “for your perseverance and support and, above all, for your confidence and faith and for always being there at the right moment, especially during this very crucial period for Lebanon and the United States.”

Since NUSACC launched its Ambassador of the Year ceremony in 2004, the award has gone to diplomats from Egypt, Libya, Morocco, Oman, Qatar, Saudi Arabia, Tunisia and the United Arab Emirates. The prize recognizes ambassadors for outstanding service in support of U.S.-Arab commercial relations.

Widely regarded as the voice of American business in the Arab world, NUSACC serves as the U.S. point of contact for the national chambers of commerce in 22 Arab nations.