Home The Washington Diplomat February 2016 Obama and Guantánamo Bay: Captive of His Own Making? 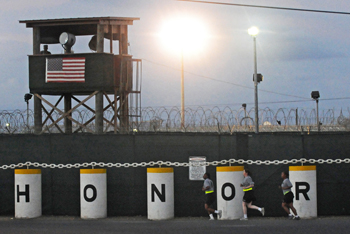 Campaigning for president in 2007, Sen. Barack Obama described the U.S. military prison at Guantánamo Bay, Cuba, as a stain on the American soul. In one of his first executive orders as president, Obama called for the detention center’s closure within a year.

Seven years since that directive, what has been labeled the most expensive prison on earth still houses scores of detainees, and the political fight over closing it threatens to outlive Obama’s presidency. There is often daylight between campaign rhetoric and presidential policy, but for civil liberties groups, the chasm is glaring when it comes to Obama’s pledge to shutter the prison.

Despite the criticism, the president has made substantial progress in closing down the controversial facility. Under his administration, the number of Guantánamo detainees has been more than halved from 242 to 93; some have been returned to their home countries while others were resettled in third countries. (Over 500 detainees were moved under President George W. Bush.) Another 10 detainees from Yemen were resettled in Oman in mid-January, and 30 more could be released by the summer (some detainees have been eligible for release for years). But that still leaves several dozen remaining detainees who are effectively in legal limbo: They have not been charged with a crime but have been deemed too dangerous to release.

Capitol Hill lawmakers repeatedly thwarted the administration’s efforts to shut down the detention center, citing fears of housing suspected terrorists on U.S. soil or releasing them to other countries where they could potentially return to the battlefield.

Retired Air Force Col. Morris Davis, who was chief prosecutor at the prison from 2005 to 2007, quipped that the issue has become so partisan that Obama would have had better luck closing Guantánamo had he stated the opposite goal.

Davis said Obama blew an opportunity to close the prison in the first two years of his presidency, when Democrats controlled both chambers of Congress.

“I think it’s convenient for the administration to say, ‘Oh, we want to close it and Congress won’t let us,’ which there’s a measure of truth to that, but, again, I think it ignores that they had the opportunity to do it and didn’t,” Davis said in an interview. He resigned in protest as chief prosecutor in October 2007 in part because waterboarding-induced testimony was allowed in commission hearings.

That turn of events was “the moment when it became clear to all that Obama’s government was not going to sail along and close Guantánamo,” wrote New York Times reporter Charlie Savage in his book “Power Wars.”

Republicans have also chided Obama for not moving more aggressively to close the prison in the early years of his presidency. “2009 was the year, politically, when the table was set for the president to spend political capital to do that; he failed to do that,” said Charles “Cully” Stimson, who was deputy assistant secretary of defense for detainee affairs from 2006 to 2007 under President George W. Bush.

Republican control of the House and Senate now poses a formidable challenge to Obama’s efforts to close Guantánamo. Congress’s annual defense policy bill has been a vessel for erecting new barriers to shuttering the prison. The National Defense Authorization Act for fiscal 2016 put additional restrictions on detainee transfers to certain foreign countries. Obama signed the bill in November while calling those restrictions “unwarranted and counterproductive.”

The threat of terrorist attacks has also fueled the sense among some Americans, fanned by political rhetoric, that terrorists are simply too dangerous to house in the United States — even in maximum-security facilities that already hold high-profile terrorists.

Obama has said the fight over a relatively small number of detainees has damaged America’s “moral authority” and provided fodder for extremist recruitment. “I think that there is just a very strong tendency for us to get worked up around issues that don’t actually make us safer but make for good political sound bites,” the president said at a recent press conference. “Whether it’s refugees or Guantánamo, those are handy answers particularly for folks who aren’t interested in engaging in more serious debate on how do we invest in a long, hard slog of dealing with terrorism.”

Stimson spoke at a Dec. 8 Heritage Foundation event where Sen. Tom Cotton (R-Ark.) gave a speech on why he opposed closing Guantánamo. The Iraq War veteran cited recent terrorist attacks in San Bernardino, Calif., and Paris as a reason for keeping the facility open. The U.S. government needs a prison in a remote area that is secure from attack where interrogators can ply their trade, Cotton argued.

“In the end, moving Guantánamo detainees to the United States will create a federal prison population that is more dangerous, more jihadist and much more costly to keep locked up,” the senator asserted.

Not all of the administration’s battles over closing Guantánamo have been external. Defense Secretary Ash Carter and his predecessor, Chuck Hagel, have faced pressure from the White House to quicken the pace of detainee transfers. The defense secretary is required by a 2011 law passed by Congress to ensure security requirements have been met before personally signing off on detainee transfers to other countries. So in theory, if a former detainee returns to the battlefield and attacks Americans, the defense secretary could face the political fallout. 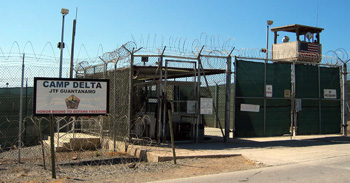 This photo from 2005 shows the entrance to Camp 1 in the U.S. military’s Guantánamo Bay detention center, a sprawling complex that was established in January 2002 by the Bush administration.

White House officials have reportedly been frustrated by Carter’s slow approval of transfers; he did not decide on any new transfer proposals in his first six months in office. A recent Reuters report found that Pentagon officials have consistently thrown up obstacles to transfers by, for example, refusing to provide documentation on detainees to foreign governments considering accepting them. The Pentagon has also placed new restrictions on journalists seeking access to the facility.

Some officials in the intelligence community could have a vested interest in keeping the prison open. The Senate Intelligence Committee’s report on the CIA’s use of torture after the Sept. 11 terrorist attacks casts new light on the pending cases of some Guantánamo detainees. The abridged report’s release in December 2014 allowed lawyers for some Guantánamo defendants to, for the first time, speak openly in court about the torture to which their clients were allegedly subjected.

Chris Anders, senior legislative counsel at the ACLU’s Washington Legislative Office, argues that some U.S. intelligence officials are opposed to the closure of Guantánamo for the same reason they fought to suppress the Senate committee’s report: They fear scrutiny of the torture they inflicted.

“The living, breathing testimony as to what actually took place are the detainees who are still at Guantánamo,” Anders told The Diplomat.

If Obama is weary from the drawn-out saga of Guantánamo’s closure, he is trying not to show it, insisting that he is resolved to shutter the prison. At a year-end press conference on Dec. 18, the president described his plan to whittle away the number of detainees through transfers to other countries. But that drawdown will still leave Guantánamo with an “irreducible population — people who pose a significant threat, but for various reasons, it’s difficult for us to try them in an Article III court,” Obama said.

That final group of detainees, what Obama calls the “irreducible population,” comprises several dozen detainees who have not been charged but are deemed too dangerous to release. Those detainees could prove to be the thorniest obstacle to the prison’s closure. Obama will have to decide if he wants to circumvent Congress and send the detainees to U.S. prisons via executive action, which would almost certainly invite court challenges.

In a November op-ed in the Washington Post, two of Obama’s former top advisers on Guantánamo urged the president to go it alone, arguing that congressional restrictions on where the president houses detainees are unconstitutional.

“The question here is not whether the president can unilaterally take the nation to war or hold detainees without congressional authorization,” wrote Gregory Craig and Cliff Sloan, respectively the White House counsel in 2009 and the special envoy for Guantánamo closure in 2013 and 2014. “The question is whether Congress can tell the president where military detainees must be held. The answer is an emphatic no.”

But Obama hopes that, with congressional help, unilateral action won’t be necessary. “We will wait until Congress has definitively said no to a well-thought-out plan with numbers attached to it before we say anything definitive about my executive authority here,” Obama said at the year-end press conference.

For Morris, the former Guantánamo chief prosecutor, turning a page on an era of indefinite detention should mean coming up with an improved framework for military commission trials.

Khalid Sheikh Mohammed, the self-proclaimed mastermind of 9/11, still awaits trial at Guantánamo. But his case has been tainted by the fact that, according to the Senate committee report, the CIA waterboarded Mohammed 183 times.

“We’ve screwed this up so bad it’s beyond the point of redemption,” Morris said of the use of military commissions for 9/11 suspects.