Home The Washington Diplomat April 2020 Op-Ed: How Would a World-Class Statesman in the White House Respond to Covid-19? 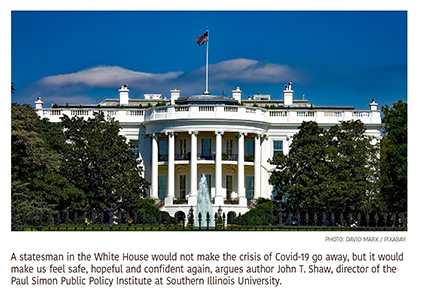 The question that has dominated my thinking in recent weeks is: How would a world-class statesman or stateswoman residing in the White House respond to the Covid-19 pandemic? Obviously there is no simple solution in tackling this crisis; however, the history of American statesmanship suggests a roadmap.

Statesmanship is exceptional leadership characterized by vision, courage, compassion, effectiveness and civility. It does not expect perfection but assumes competence and demands excellence. Vision is the ability to see beyond the rush of daily events and to develop and execute a long-term strategy. Courage has been called “grace under pressure” and demands steps that may be unpopular, with benefits that are not immediately evident. Compassion marries empathy with action. It requires respect and regard for all of our contemporaries and those who will come after us. Effectiveness stipulates that good intentions are not enough. Accomplishment is essential. Noble failure may be poetic but it is emphatically not what is needed now. Civility embraces politeness and respect; it is the glue that holds communities and societies together, especially during a crisis.

Statesmanship, according to one analyst, requires “a rare combination of greatness and goodness.” We urgently need both now.

So what would a statesman do to tackle the Covid-19 pandemic?

I am convinced this crisis would have unfolded very differently in the United States if a statesman had been at the helm. He or she would have educated themselves about the threat of a pandemic before it happened. They would have been briefed on the myriad reports and plans already drafted by the federal government to respond to an imminent threat. A statesman would have listened to the warnings issued by the intelligence community in January and February, carefully followed established protocols and galvanized a disciplined government response.

Given where we are now, with a sense of crisis and panic gripping the country, I believe a statesman would respond to Covid-19 this way:

While many units of government are critical in responding to this pandemic, the federal government must take the lead and the president of the United States must be a confidence-inspiring leader. Blaming predecessors, ridiculing other officials and deriding other nations is unhelpful and unworthy. A statesman would recall President John F. Kennedy’s terse words as he accepted responsibility for the Bay of Pigs debacle: “I’m the responsible officer of the government.”

2) Gain a Broad and Nuanced Understanding of the Crisis

A statesman would consult with experts in epidemiology, economics, public health, mental health and sociology to determine the current and future scope of the pandemic. They would bring in former government executives with trusted records in crisis management and solicit their candid views and unvarnished recommendations. A statesman’s team would comb existing studies by the government and think tanks. They would launch a vigorous and wide-ranging debate that acknowledges ambiguity and confronts conflicting perspectives. The goal is to establish facts, determine what is knowable and what is unknowable, and develop a comprehensive strategy.

A statesman would consult historians to review the 1918 Spanish flu pandemic and more recent epidemics, as well as the disruptions caused by the 9/11 terrorist attacks and the 2008 economic crisis. The objective is not to conjure tidy analogies but to learn how societies have responded to catastrophes.

To structure policy deliberations, a statesman could draw from the disciplined strategic planning process developed by President Eisenhower for his National Security Council. This process carefully examined assumptions, established facts, projected trends and then debated options that Eisenhower carefully considered to make decisions. It would be useful to replicate Eisenhower’s most celebrated strategic planning accomplishment as president — the so-called Solarium exercise in 1953 — in which three distinct national security approaches toward the Soviet Union were rigorously examined and a new strategy formulated. The Solarium exercise is often described as government planning at its zenith.

3) Develop an American and Global Strategy

Weighing short-, medium- and long-term challenges is essential in fashioning a comprehensive American Covid-19 strategy. A statesman in the White House would take the lead, consulting with bipartisan congressional leaders, governors, mayors, public health officials, religious leaders and former presidents of the United States. Well-organized discussions would generate creative ideas and broad support for the plan. 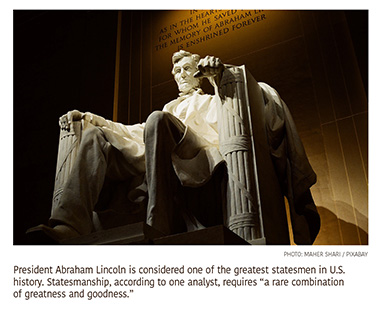 contact with other world leaders and institutions such as the United Nations, World Health Organization, World Bank and International Monetary Fund. The goal is to mobilize a global coalition focused on containing the pandemic, easing suffering, arresting economic collapse and sharing information. Forging a coordinated international strategy with global partners is essential. President George H.W. Bush’s aggressive outreach to world leaders in 1990 after the Iraq invasion of Kuwait serves as a compelling model of how to build a powerful coalition.

4) Communicate Persuasively to America and the World

A statesman’s public statements must be candid, clear, consistent and confident — the tone truthful and hopeful. A statesman would prepare the nation for hardship and struggle, but also express resolve and conviction that better times will return. A call for shared sacrifice and solidarity is essential.

President Franklin D. Roosevelt’s fireside chat on March 12, 1933, is a model of crisis communication. Speaking warmly and confidently to 60 million frightened Americans, the president explained his administration’s initial response to the banking crisis and the Depression. “My friends,” he began. “I want to tell you what has been done in the last few days, why it was done and what the next steps are going to be.”

He lauded the fortitude of the American public, praised Congress for passing critical banking legislation and exuded hope. “Confidence and courage are the essentials of success in carrying out our plan. You people must have faith; you must not be stampeded by rumors or guesses. Let us unite in banishing fear…. Together we cannot fail,” FDR declared.

A coherent and well-conceived strategy and honest and inspiring public message must be fortified with ruthlessly competent implementation. A statesman would designate a leader with a stellar reputation and shrewd understanding of the government to make sure the strategy is successful. Two former CIA directors and secretaries of defense, Robert Gates and Leon Panetta, are worthy candidates. Both appreciate the importance of competent management leading to tangible results. Gates has observed that inattention to the details of implementation is “where all too often good intentions go to die.”

A statesman’s Covid-19 pandemic strategy would be aggressive, comprehensive and flexible enough to adjust to evolving circumstances. This crisis will likely continue over many months and a temporary flattening of the curve may be followed by a dramatic return of the virus. It may not relent until a vaccine is available. A statesman must be keenly aware of health risks, economic fragility and social restiveness. Solving the public health crisis is essential and no sustainable economic rebound will occur until then. Proclaiming “Mission Accomplished” too soon would demoralize the country.

The failure of nations and peoples to learn from the mistakes of the past is the oldest, most discouraging and most dangerous story in history. A statesman would be determined to make the Covid-19 response an exception. When the crisis ends, a statesman must launch an unflinching assessment of why our nation responded so poorly. Why were careful reports and clear warnings ignored? How can the United States arm itself against future complacency regarding rare, but potentially devastating, threats? How did leaders once again allow the urgent to win out over the important? What are the long-term implications for this crisis on American society? How can this crisis be used to bring about constructive change?

8) Focus on History, Not November

The steps a statesman must take now may be politically painful and unpopular. This is not the time for happy talk, or false hope or attention to the electoral calendar. A statesman should seek the approval of history, not the voters in November.

Given our current travails, it is easy to forget than statesmanship has been a critical and recurring feature of American history. From the bravery and vision of the founding generation in the 18th century, to the wisdom and practicality of public officials following World War II, to the leaders of movements for social and economic equality in the 1960s, the United States has produced world-class statesmen.

A statesman in the White House would not make this crisis go away, but would make us feel safe, hopeful and confident again.

Author John T. Shaw is a contributing writer for The Washington Diplomat and director of the Paul Simon Public Policy Institute at Southern Illinois University.