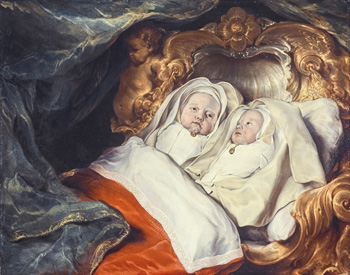 “Drawings for Paintings in the Age of Rembrandt” reveals the prep work behind Dutch golden age masterworks, such as Salomon de Bray’s “The Twins Clara and Albert de Bray.”

The National Gallery of Art exhibition “Drawings for Paintings in the Age of Rembrandt” takes viewers beyond and beneath the canvas to reveal the prep work involved in creating masterworks of the Dutch golden age. Nearly 100 drawings, many paired with related paintings, offer a window into the artist’s mind before their paintbrush ever touched the canvas.

Not surprisingly, paintings by 17th-century luminaries such as Rembrandt van Rijn, Aelbert Cuyp and Jacob van Ruisdael — renowned for their realism and detail — weren’t done on the fly. The artists laid plenty of groundwork. The drawings on display here include sheets from sketchbooks, rapidly done compositional designs, intricate figure studies and meticulously rendered construction drawings made with the aid of a ruler and compass.

The expansive show is a delight for art students or historians with a critical eye for digging into artistic execution and process. But the exhibit — while replete with the underpinnings of painting — also attracts the casual eye. That is not to equate casual with careless; rather, it is to say that the show will appeal to the discerning and appreciative visitor who may not have technical expertise, but who is passionate about the beauty of art.

There is a lot to take in, from the various preparatory drawings to the wide range of subjects and genres, including depictions of everyday life, landscapes, architectural studies, portraits, still lifes, historical scenes and biblical portrayals.

The exhibition debunks the theory that many 17th-century Dutch works were believed to have been painted from real life, when in fact most artists based their paintings on preliminary drawings and sketches done in the studio.

The drawings that are paired with their eventual paintings present a guidepost of process, as in Jan Anthonisz van Ravesteyn’s depictions of a lively group of Hague magistrates from 1618, which offers the chance to compare and contrast the early idea with the finished product and appreciate both works. Here, for instance, the somber but highly detailed painting completes the vibrancy of the drawings, whose kinetic qualities settle into the gathered men in black and white in the final result.

This happens throughout the exhibition. There’s not only a dialogue between the paintings and drawings, but there’s also a richness that allows for stand-alone glory.

We are, of course, drawn to the show’s namesake — Rembrandt — but there are numerous others who present what is the true gift of this exhibition, which is a varied, intricate and energetic survey of Dutch life in the 17th century, with all of its attendant nuances — from its curved shoes, pipes and sculpted triangular beards to its architectural façades and lush country sides. The resulting realism captures moments in time, and the drawings, as much as the paintings, have the power to elicit emotions and admiration, even at their sketchiest.

Consider, for instance, Abraham Bloemaert’s 1629 painting of a rundown house whose structures and people seem to be in disrepair, a theme that reemerges in his detailed drawings of a woman supporting herself with a stick. They speak to the harsher underbelly of a time often glorified as a pinnacle of trade, prosperity and cultural achievement. 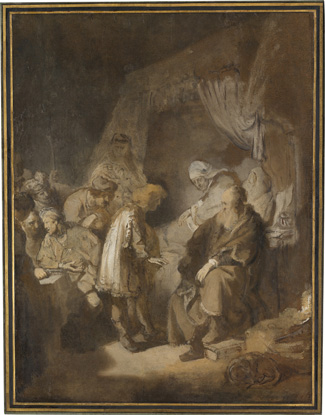 Rembrandt infused this type of humanistic realism not only into his portraits, but also his dramatic biblical and mythological scenes. According to the National Gallery, Rembrandt made figure studies to resolve specific poses or groupings in his biblical paintings. His 1631 drawing “Old Man Seated” is a hauntingly sad, swirling vision of age and frailty that made its way into a later painting, “Joseph Telling His Dreams.” Painters often used single figures — herds men, nudes, public officials — as genre drawings to be incorporated into later paintings. Rembrandt often did this, populating his famous “St. John the Baptist Preaching” with people from earlier sketches and studies.

Something similar happens in Dirck van Bergen’s beautifully placid and almost idyllic “Landscape with Herdsmen and Cattle Near a Tomb,” which features a panoply of farm animals, including lambs, sheep, cattle and horse, tended by two women and a young man. One of the women makes a reappearance in a large drawing called “Kneeling Woman,” where she comes wondrously alive.

In fact, the drawings often stand on their own merit. Isaac van Ostade’s 1649 “Group of Houses with a Church Tower in the Background,” for instance, is a singular creation.

The fusion of drawing and painting, however, lends vibrancy to the subject matter. Willem van de Velde the Elder and Willem van de Velde Young both used drawings and sketches as the basis for their marine works, in which father and son specialized to apparently great profit. They executed thousands of drawings in their lifetimes. In this exhibition, we see their extensive paintings and drawings of the Royal Prince battleship in action during the Four Days’ Battle of the Second Anglo-Dutch War in 1666. The historical works have a modern-day feel as they bring the fighting on the high seas to dramatic life.

One of the most striking pairings in the exhibition is Adriaen van Ostade’s drawing of dancing figures with the painting “Peasants Dancing in a Tavern” — forming a lively album of relatives who tell the same story but in a different way.

“Drawings for Paintings” revisits and revels in a glorious age of creativity, paying homage not only to the paint that brought the era to life, but also to its equally important companions of pen, ink, charcoal, pencil, sketchbook and chalk.

Drawings for Paintings in the Age of Rembrandt

Gary Tischler is a contributing writer for The Washington Diplomat. Anna Gawel is the managing editor.