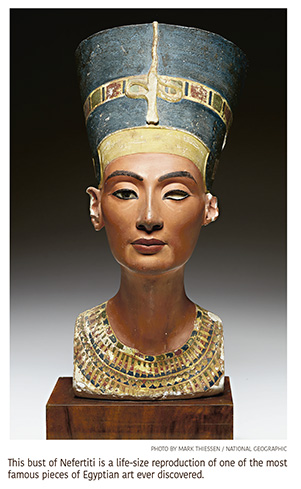 The National Geographic Museum’s new exhibition takes what may strike some as a familiar subject — ancient Egypt — and reframes and transforms it by placing women and power at the center.

“Queens of Egypt” takes visitors on a journey through 1,400 years of history, with about 350 stunning artifacts on display. Goods found in the tomb of Nefertari, a papyrus scroll detailing an ancient conspiracy to kill a pharaoh and grand statues of goddesses are just a few of the remarkable objects found throughout the massive exhibition.

And, of course, there are the mummies.

“When you look at the official history of Egypt, it’s written for the pharaohs, by the pharaohs, about pharaohs. So it’s like a guy’s story,” curator and archaeologist-in-residence Fredrik Hiebert told The Washington Diplomat. “And you sort of think, at what point are we going to talk about the queens? They’re not written down. But through archaeology, through the artifacts and through context, we can actually tell the untold story. So we really wanted to do that at National Geographic.”

It makes for a revelatory, blockbuster show.

The show does a splendid job of highlighting the queens chosen by curators, beginning with Ahmose-Nefertari, who reigned from 1539 to 1514 B.C., and closing with Cleopatra, whose legacy was largely obscured and destroyed by Octavian’s propaganda. These royals are the focus, as one would expect in a show called “Queens of Egypt,” but the lives of everyday women are also explored and reconsidered.

“Women in ancient Egypt, unlike other civilizations in the classical world, they did enjoy some rights that were not found in ancient history. It was a very patriarchal society. We don’t want to by any means suggest that it wasn’t, but women could own property, they could divorce their husbands, they were often portrayed in art side by side in the same size. And particularly at the royal level, there were many women who were actually ruling Egypt during a period of their life,” Kathryn Keane, the director of the museum, said.

Art, science, archaeology, history and technology weave together throughout the exhibit, providing many threads to dive in and study — all through the fascinating frame of female power in ancient Egypt. 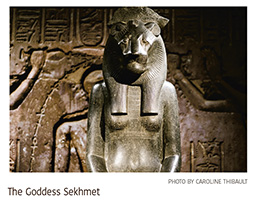 National Geographic researchers detail in videos how they’ve made new discoveries about life in ancient Egypt. Guests can put on 3-D glasses and step inside an immersive theater to be transported through Queen Nefertari’s tomb. You can lift the lids of perfume jars to get a sense of the scents women may have used in ancient Egypt, or try your hand at the ancient Egyptian game senet. And some rooms feature music and highly detailed projected backdrops from a recent “Assassin’s Creed” video game that takes place in Egypt to evocatively set the scene.

But there’s no question that the stunner is the array of artifacts on display, many from the outstanding collection of the Museo Egizio in Turin, Italy.

“These things are all transported by art movers. The boxes, by tradition, aren’t labeled, because you don’t want your treasures to say, ‘Hey, treasures here.’ So we don’t know what’s inside of the boxes. So that week where we spend opening the crates for me is magical. Because it’s like, box number 14? What’s it going to be?” Hiebert said. “It’s like a kid being here for the grand reveal.” 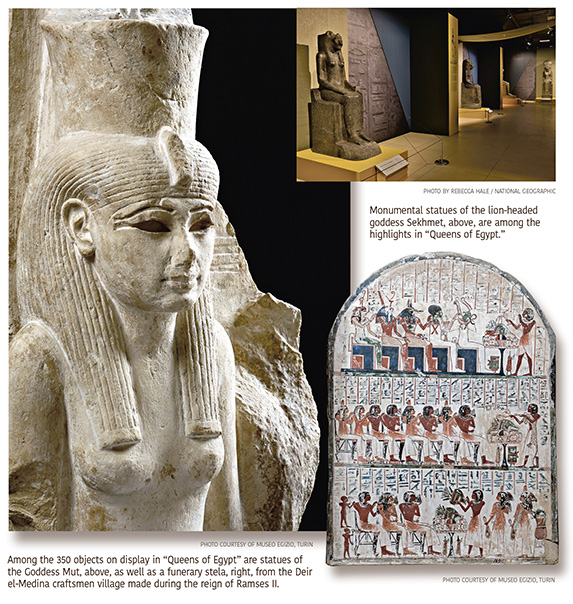 Galleries also explore typical life for women, whether it was in a pharaoh’s harem or in a village, Deir El-Medina, that was home to those working on royal projects like the tombs in the Valley of the Queens.

“We wanted to have an example of some of the everyday artifacts people used — the spoons and the mirrors and the perfume bottles and the jewelry,” Keane said.

And near the close of the show is a moving and strikingly beautiful section that examines ancient Egyptian rituals related to death and the afterlife, featuring ancient funerary texts and impressive sarcophagi.

“By the numbers, this was sort of an astonishing coup to get this collection, because a lot of these have never traveled to the United States before,” Hiebert said. “We ended up at about 350 artifacts. They are amazing. It’s mainly New Kingdom, but we did go and add Cleopatra, because you have to have Cleopatra. You will see 350 artifacts that really do tell the story of ancient Egypt from a woman’s perspective. You won’t see anything like this in any other museum.”

This is a special, can’t-miss exhibition. Supported by the Italian and Egyptian embassies, showcasing spectacular artifacts from a number of museums and highlighting National Geographic’s particular flair for employing interactive elements in their exhibitions, it’s an essential show for anyone in Washington this summer.