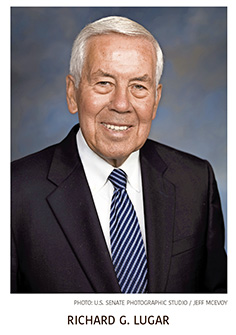 On April 28, Richard G. Lugar, a six-term Republican senator from Indiana, passed away at the age of 87. Lugar, who graduated from Denison University and the University of Oxford, served as chairman of the Senate Foreign Relations Committee twice and was internationally renown for his work in helping to dismantle nuclear, biological and chemical weapons around the world.

Hundreds of mourners gathered at his funeral on May 15, where Vice President Mike Pence called Lugar “a true American statesman” who “will be remembered among a discrete pantheon of senators who commanded the respect of his peers in both parties and exercised enormous influence in foreign affairs.”

Several weeks ago in my capacity as the director of the Paul Simon Public Policy Institute at Southern Illinois University Carbondale, I spoke to a group of Illinois university students about the need for statesmanship in our country and around the world. I described statesmanship as exemplary leadership characterized by vision, courage, compassion, fairness, effectiveness and wisdom.

A politely skeptical student asked me to give one example of a recent political figure who embodied these qualities. Without hesitating, I offered the name of Sen. Richard Lugar of Indiana.

I described Lugar’s leadership in 1986 on legislation imposing economic and political sanctions on South Africa, noting that Lugar defied President Ronald Reagan on the bill that ushered in a new era in the American response to apartheid. I added that same year, Lugar helped convince the Reagan administration to recognize Corazon Aquino as the winner of the disputed presidential election in the Philippines against incumbent Ferdinand Marcos. I outlined many of Lugar’s other contributions to U.S. foreign policy, including his cooperation with President Barack Obama to secure passage of the New START treaty in 2010 at a time when most Republicans decided to oppose the treaty mostly because it would give the president an accomplishment that he could cite in his coming re-election bid.

I think I made a good case that Lugar, who entered the Senate in January 1977 as an ambitious former mayor of Indianapolis, departed the upper chamber in January 2013 as a global statesman.

Although Lugar was a proud and loyal Republican, he worked closely and effectively with Democratic lawmakers such as Sam Nunn of Georgia, Joe Biden of Delaware, John Kerry of Massachusetts, Robert Casey of Pennsylvania and Barack Obama of Illinois.

Without a doubt, Lugar’s landmark legislative accomplishment was the Nunn-Lugar Cooperative Threat Program, which partnered him with Nunn on a bold plan to secure and dismantle weapons of mass destruction in the Soviet Union as it was collapsing in 1991. Facing an indifferent administration and opposition from many in Congress, the two senators cobbled together an emergency response that was acceptable to a wary President George H.W. Bush and skeptical lawmakers.

From this humble start, Nunn-Lugar evolved into an historic law that helped secure and then destroy thousands of nuclear weapons in Russia and removed all strategic nuclear warheads from Ukraine, Kazakhstan and Belarus. Lugar proudly observed that the Nunn-Lugar program eliminated more nuclear weapons than the combined arsenals of France, China and the United Kingdom.

Lugar was not perfect.

Even some of Lugar’s strongest supporters believe he should have been more forceful in challenging the George W. Bush administration in its drive to war with Iraq in 2003. During Senate Foreign Relations Committee hearings about Iraq before the war began, Lugar raised hard and prescient questions. But when the Bush administration failed to provide persuasive answers about how Iraq would be governed after a U.S. invasion, Lugar opted not to challenge the White House publicly. His efforts at private persuasion were rebuffed.

Throughout this career, Lugar proudly cooperated with both Democratic and Republican administrations to advance the national interest. This bipartisanship ultimately came at a serious political cost and was a factor in his crushing defeat in a 2012 Republican primary in Indiana to a Tea Party-backed candidate, Richard Mourdock, who would go on to lose the race to his Democratic challenger.

But Lugar moved on and served the nation nobly after departing the Senate. He created the Lugar Center, which works on several of his policy passions: controlling the spread of weapons of mass destruction, enhancing global food security and reforming American foreign assistance programs. The Lugar Center has also pioneered a range of programs to bolster badly needed bipartisanship in the United States.

I am convinced that history will be extremely kind to Richard Lugar, placing him in the same league as other foreign policy giants such as Sens. J. William Fulbright, Arthur Vandenberg and Henry Jackson.

His example of civil, fair-minded and honorable public service will remind us all what statesmanship can look like in the contemporary world.

Author John T. Shaw is a contributing writer for The Washington Diplomat and director of the Paul Simon Public Policy Institute at Southern Illinois University.