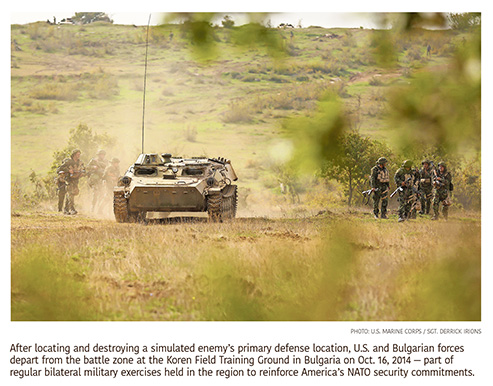 A day after NATO chief Jens Stoltenberg called for the alliance to hold its ground against an increasingly bellicose Russia, the foreign ministers of the three Central European countries that joined the bloc as part of its first eastward expansion following the collapse of the Soviet Union also warned of new threats from Moscow even as they celebrated what Polish Ambassador Piotr Wilczek termed “arguably the most successful alliance in the history of mankind.”

The Czech, Hungarian and Polish foreign ministers were marking the 20th anniversary of their membership into NATO as well as the security alliance’s 70th anniversary. The day before the three ministers spoke at the Polish ambassador’s residence in Washington, D.C., Vice President Mike Pence reiterated his boss’s criticisms that some NATO members aren’t carrying their weight, although Pence declared that “the alliance at 70 has never been stronger,” due in large part to President Trump’s leadership.

The three foreign ministers backed Trump’s calls for increased defense spending but cautioned against viewing the alliance in transactional terms during a panel discussion titled “Twenty Years Later: Lessons from NATO’s Enlargement and the Alliance’s Future.”

Pushed through despite protests from Moscow, NATO’s first eastward expansion added the three Central European countries in 1999, as the sheen was just starting to wear off Francis Fukuyama’s idea of the “end of history,” Polish Foreign Minister Jacek Czaputowicz recalled. Two weeks later, NATO’s intervention in the Kosovo War began.

“With [NATO] membership, we got more rights, we got more security, but at the same time we took responsibility,” said Czech Foreign Minister Tomáš Petříček, touching on a key theme all three countries repeatedly emphasized — that they are among the most vocal proponents of a muscular alliance.

“We want to be active and we have been an active member of NATO. We contributed to many missions, and we also sacrificed the most valuable price, the price of human life,” Petříček said. 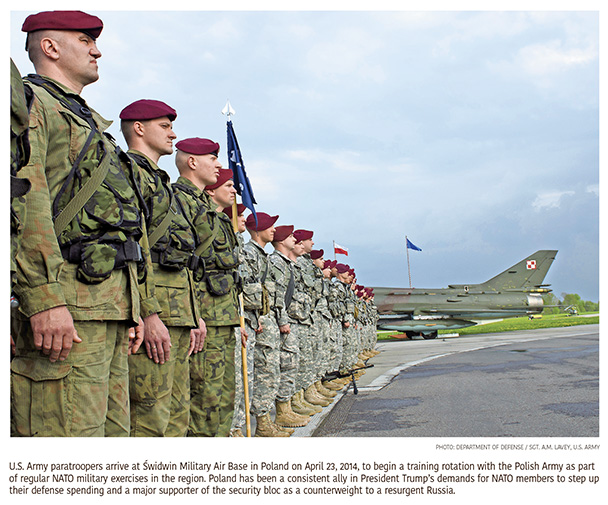 Poland has sent troops into Kosovo and Afghanistan along with contributing to other NATO missions. Hungary, too, provided soldiers for those operations, and recently announced it would boost its contribution to the training mission in Iraq to 200 troops from 167. And the Czechs sent more than 2,000 doctors, medical staff and military police to the Iraq War, deployed special combat troops to Afghanistan and joined missions in the Balkans and Baltic states.

“We can be proud of ourselves, because we turned out to be countries that not only speak about the importance of the fight against terror, but act accordingly,” said Hungarian Foreign Minister Péter Szijjártó.

Szijjártó was especially frank in his support for the polarizing American president, calling Trump’s initial remarks excoriating NATO freeloaders “the most exciting speech I have heard from a politician who was not my prime minister.”

“It is a very legitimate expectation on behalf of the American president and the American people that we Europeans should do much more when it comes to contributing to the success [of NATO],” Szijjártó said.

NATO Secretary-General Stoltenberg, whose term was recently extended by another two years, has also credited Trump with pushing members to increase their defense spending to 2 percent of annual GDP, even though Trump’s predecessors, George W. Bush and Barack Obama, repeatedly pushed for the same commitments (and member states had already agreed to meet that target by 2024).

Critics say Trump’s single-minded focus on defense spending simplifies and obscures more critical issues, such as improving battle-readiness and coordination among NATO’s 29 member states, as well as preparing for emerging threats such as cyberattacks.

In addition, Trump’s claim that the U.S. is “owed” this money is inaccurate, because the money represents domestic spending levels, or funds that NATO countries decide to spend on their individual militaries — not money paid to anyone else or that’s put into a collective pot.

But by relentlessly hammering away at members’ defense spending, Trump has put the issue front and center on NATO’s agenda. And allies have been quick to respond for fear that Trump will make good on his repeated threats to abandon a security bloc that has served as a bedrock of transatlantic stability since World War II.

Many say that Stoltenberg’s constant praise for Trump’s efforts has mollified the president and resulted in a marked decrease in the heated anti-NATO rhetoric that marked his first two years in office. Member states that have boosted their spending or reached the 2 percent goal have also been quick to tout their achievements. That includes the three Central European nations that have been strong supporters of the U.S. president. 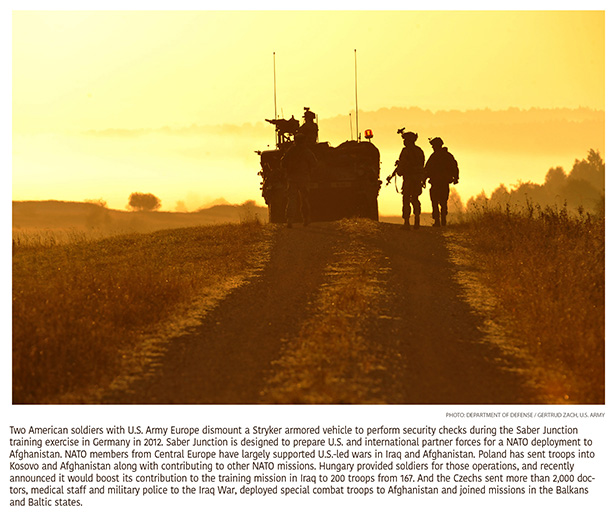 Poland was among the handful of NATO countries to meet the 2 percent requirement last year, according to expenditure data published by the alliance. The Czech Republic boosted its outlay to reach 1.11 percent of GDP, compared with 1.04 percent in 2017. And Hungary, which increased spending to 1.15 percent of GDP from 1.05 percent a year earlier, is on track to surpass the 2 percent threshold well before the 2024 deadline set following Russia’s annexation of Crimea in 2014, Szijjártó said.

Located on Europe’s eastern and southern frontiers, the three nations are also perhaps the alliance members most keen to push back strongly against Moscow’s moves to expand its sphere of influence westward — even if some pundits see Russia’s post-Cold War assertiveness as a reaction to the expansion that brought them into NATO.

Russian President Vladimir Putin has for years warned that NATO’s steady encroachment into its backyard would poison relations with the West and force Russia to safeguard its borders. Moscow, in fact, recently severed all diplomatic contact with NATO in response to the bloc ending its contact with Russia on military issues, marking another low in the relationship since Russia’s annexation of Crimea.

In reiterating calls for a permanent U.S. troop presence in Poland, Czaputowicz said Russian antagonism “looks like a permanent feature of the geopolitical environment,” and emphasized that “a military presence is crucial for our security because it is the only real deterrent against Russia.” 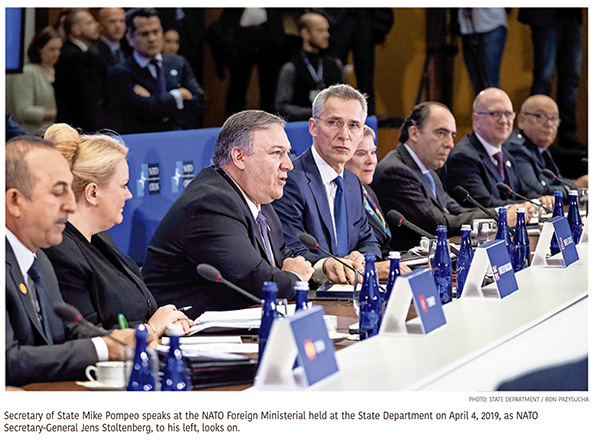 Although Hungarian Prime Minister Viktor Orbán has sometimes shown more affinity for Putin than for fellow European Union leaders, Szijjártó pointed out that Budapest helped circumvent Russia’s energy blockade of Kiev with reverse gas flows, even though Hungary, too, gets its entire energy supply from Russian gas.

And Petříček joined his counterparts in supporting Trump’s recent decision to pull out of the Intermediate-Range Nuclear Forces (INF) Treaty, although he said America’s NATO allies are keen to avoid a Cold War-era arms race in Europe (also see this month’s People of World Influence column).

“Any treaty needs both sides to comply,” Petříček said. “We have witnessed that Russia hasn’t complied, and that created a situation where it wasn’t prudent for the U.S. to comply, either.”

With talk swirling of a possible move to boot Turkey out of the alliance over its recent purchase of a Russian air and missile defense system, the three beneficiaries of NATO enlargement agreed that the alliance should continue its expansion rather than look to expel members.

“One of the most successful policies of NATO is enlargement,” said Hungary’s Szijjártó, emphasizing that Turkey boasts the second-largest standing army in the alliance, after the U.S.

Similarly, Petříček reiterated his country’s support for the so-called “open door” policy rooted in Article 10 of the 1949 treaty that founded the alliance, although he recognized that Turkey’s arms purchases are a complicated issue, while Poland’s Czaputowicz said that buying Russian military equipment did not call Turkey’s general loyalty to the alliance into question.

“Turkey is a reliable member of NATO,” Czaputowicz said.

Where emerging threats are concerned, there were hints of dissent among the three allies. With Hungary’s rightwing populist government and geographical location on the southern border of the European Union, Szijjártó identified illegal migration from war-torn countries in North Africa and the Middle East as a problem that is just as crucial to the alliance as is the threat of Russian adventurism.

“I’m coming from a country through which 400,000 illegal migrants marched in 2015, so when we speak about the threat from the south or the challenge from the south, we have to be aware that if we are not only to protect our own borders, we are not going to be able to guarantee the security of our citizens,” Szijjártó said, tacitly justifying Hungary’s construction of fences and other barriers along its border with Serbia and Croatia in 2015.

In contrast, Petříček spoke of the need to remember that NATO is not only about military operations, but also about the values that the alliance is defending — a fuzzy ideal that the ministers steered clear of elucidating. And Czaputowicz made clear that his nation’s interest in securing Europe’s southern borders was a concession to its obligations, saying, “We understand that we have to demonstrate our solidarity with others if we want them to help us.”

As the idea of common values seesaws with changes in national governments, that solidarity will be essential to NATO’s survival.

Jason Overdorf (jasonoverdorf.com) is a freelance writer in Washington, D.C.