Home The Washington Diplomat August 2014 Somaliland: An Oasis of Stability Makes Its Case for Independence 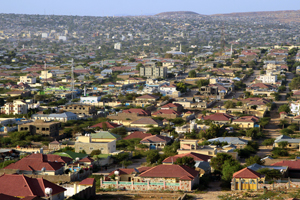 Mention the word Somalia and many Americans think of a lawless Horn of Africa nation beset by poverty, piracy, conflict and perhaps even the 1993 Battle of Mogadishu, recreated in vivid, dramatic detail in the film “Black Hawk Down.”

Yet Somalia has made concrete strides in recent years, with an internationally supported government that has brought a measure of normalcy to the war-wracked nation of 10 million, though its authority doesn’t extend far beyond Mogadishu. Outside the capital, the country remains plagued by domestic infighting, a stagnant, informal economy and the militant Islamist group al-Shabaab, whose reign of terror continues largely unabated.

Houses line a residential area of Hargeisa, the capital of Somaliland, an autonomous region of Somalia that enjoys relative stability compared to its lawless neighbor

Meanwhile, the breakaway republic of Somaliland, a northern, Muslim-majority province that declared its independence from Somalia in 1991, is relatively stable, if not thriving. Bordered by Ethiopia in the south and west, a slice of Djibouti in the northwest, the Gulf of Aden in the north and the autonomous Puntland region of Somalia to the east, Somaliland’s fledgling economy is steadily growing. The self-declared republic is relatively unscathed by terrorists, pirates and the anarchy that afflicts the region, and it has a functioning, democratically elected government with its own constitution.

But Somaliland is still regarded as an autonomous region of Somalia by the international community — not an independent state. Somaliland’s leaders are working hard to change that as they make an aggressive push for recognition as a sovereign state by the United Nations.

Some argue — inside and outside of Somaliland — that recognition is long overdue. After achieving independence from British colonial rule on June 26, 1960, Somaliland was recognized as a sovereign entity by the United Nations and 35 countries, including the United States. Several days later, on July 1, the country of Somaliland voluntarily joined with its newly independent southern counterpart to create the present-day Federal Republic of Somalia.

The union began to fray in the 1980s, when the Siad Barre regime massacred tens of thousands of Somalilanders. The longtime dictator’s increasing authoritarianism sparked a clan-based resistance that led to his downfall in 1991, plunging the country into chaos and civil war. At that point, Somaliland declared its independence.

“Somalilanders rightfully note that they voluntarily joined a union after independence, and that, under international law, they should (and do) have the right to abrogate that union, as they did in 1991,” argued Peter J. Schraeder of Loyola University Chicago in an essay for the Center for Strategic and International Studies. “Examples abound in the second half of the twentieth century of international recognition of countries that have emerged from failed federations or failed states, including East Timor, Eritrea, Gambia, and the successor states of the former Soviet Union and Yugoslavia. The same legal principle should be applied to Somaliland.”

Mohamed Yonis, Somaliland’s minister of foreign affairs, recently spoke to The Diplomat about the push for statehood, as well as Somaliland’s potential as a good bet for foreign investment.

“The lack of recognition and independence for Somaliland is one of the major impediments to our foreign assistance; most of the development institutions are not keen to provide us loans,” Yonis said. “The legal framework does not allow them to give loans directly to Somaliland. They need to come up with creative ways of accommodating de facto independent states like Somaliland that is peaceful, stable and safe.”

Somaliland’s inability to access funding from the World Bank, IMF and other major donors has forced it to tap its business leaders to provide the territory of 3.5 million people with some measure of financial stability. Ironically, some say the lack of direct financial aid from other countries has given Somaliland breathing space to negotiate its own political settlements and create a self-sufficient economy, unlike its aid-dependent neighbor Somalia.

That economy, in fact, has done relatively well, although income disparity remains a stubborn problem. Thanks to an entrepreneurial private sector and remittances from the diaspora, Somaliland has built schools, established a central bank with its own currency and formed an effective security apparatus that has kept terrorist attacks and piracy at bay. The government has also handed out oil exploration licenses to a number of energy groups, and investors ranging from Google to China have expressed an interest in Somaliland. There’s even a $17 million Coca-Cola bottling factory.

Despite its pioneer spirit, Yonis says Somaliland — which still suffers from widespread poverty and a dearth of infrastructure — would benefit immensely from the direct foreign assistance that would likely flow from statehood.

“We need assistance and loans that are geared to development and have no political strings,” he said. “Assistance can also be in-kind or grants that can help in areas of good governance, fighting terrorism and piracy, rule of law and justice, etcetera.”

Yonis — who holds a master’s degree in public administration from Harvard University and a bachelor’s in political science from Miami University — previously worked in operations and management for the African Union-United Nations peacekeeping mission in Darfur before being named Somaliland’s foreign minister in 2013. He says the notion of Somaliland returning as part of an inclusive Somalia, as the government in Mogadishu would like, is not going to happen — period.

“We are a de facto independent state for 23 years and we have established our own institutions and government,” he pointed out. “We have maintained peace and stability throughout the years. And we cannot afford the same mistakes of the past. We cannot be part of a failed state that has committed crimes against its own people.”

Yonis noted that Somaliland is a member of the Unrepresented Nations and Peoples Organization, which advocates for nonviolent and democratic territories that don’t receive recognition on the global stage.

“It is a worthwhile organization and we benefit from their experience,” he said. “We share information and lessons from them and it’s mutually beneficial.”

Yonis said the world could learn a few lessons from Somaliland as well. 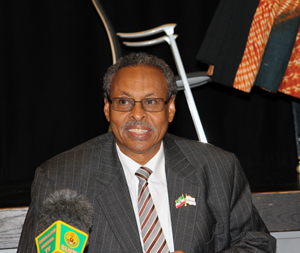 Mohamed Yonis, foreign minister of Somaliland, argues that his autonomous province deserves independence from Somalia. “We are a de facto independent state for 23 years and we have established our own institutions and government,” he said. “We cannot be part of a failed state.”

“We want to be part of the international community, and the world can benefit from our own experience in regards to peace, stability and conflict resolution,” he told us. “We are currently sharing our experiences with African states who are facing tribal and civil conflicts. We are providing a buffer zone to Ethiopia and Djibouti and protecting our borders.”

The foreign minister says Somaliland is also actively courting its neighbors instead of sitting back and waiting for statehood to happen.

“We are exploring avenues, in particular with the Intergovernmental Authority on Development in Eastern Africa and the African Union, to convince them that the independence of Somaliland is in the best interest of the region,” Yonis explained. “We are also reminding them that our situation is unique. Somaliland gained its independence from Great Britain and was recognized as a sovereign state by 35 nations including all five permanent members of U.N. Security Council. Five days later the government of Somaliland joined Somalia to create a greater Somalia, but this union proved to be catastrophic.

“The central government of Mogadishu brutally repressed the people of Somaliland, killing 50,000 of its citizens, displacing another 500,000, bombing its cities and laying over 1 million landmines on its territories,” Yonis said. “Due to such actions, the people of Somaliland revoked the act of union and declared the independent republic of Somaliland based on the borders of the former British protectorate.”

The fact that Somaliland wants to stick to those old colonial borders may help its cause with the international community. But whether Somaliland’s neighbors will support its quest for independence is another matter entirely. “Unfortunately for it, Western governments, which are mostly impressed with its efforts, say that the first move [for recognition] should come out of Africa. The chances of that happening look slim,” the Economist opined in a January editorial. “The African Union is scared that acknowledging Somaliland could create momentum for other separatist bids, and none of its member states have shown any indication that they will recognise the territory. The current crisis in newly independent South Sudan makes this even more unlikely.”

Yonis, though, isn’t discouraged and argues that Somaliland’s situation is “unique and different from other cases.”

“Somaliland has developed into a dynamic and stable democracy,” he said. “We have a de facto independent state for 23 years and its constitution was approved in 2001 by 97.7 percent of the population in a national referendum assessed by the international observers as free and fair.

“We have created a culture of peace and stability and every citizen supports the security apparatus of the country,” the foreign minister added. “Somaliland uses a lot of its resources in developing security structures that can provide a safety net for its citizens. We also get a lot of support from the international community and bilateral donors in the area of security and justice and capacity building.”

Yonis argues that independence will further integrate Somaliland into the international community, allowing foreign navies to use its ports and enabling greater security coordination to combat trafficking and terrorism.

But ultimately, if Somaliland wants independence, it will have to convince Somalia. Understandably, many Somalilanders feel that after fighting the Barre regime and struggling to build a haven of calm amid anarchy and tumult, they deserve recognition. Likewise for Somaliland’s politicians, there is real political risk in being seen as pandering to Mogadishu. However, Yonis says engagement with Somalia is necessary for Somaliland to legally define its status.

“The route to recognition goes through Mogadishu and Somaliland should continue its dialogue with Somalia in Istanbul,” Yonis said, referring to ongoing talks being brokered by Turkey on Somaliland’s bid for independence. “The dialogue is continuing and we have managed to develop trust and confidence among ourselves. For the first time Somalia has acknowledged the atrocities that they have committed against Somalilanders.”

Mogadishu, however, has given no indications it’s willing to give up such a sizeable chunk of territory — and with an unrelenting spate of attacks by al-Shabaab militants, the fragile Somali government has bigger things to worry about at the moment. Nevertheless, Yonis insists that the two sides, which have taken sharply different paths over the last two decades, can come together.

“We are confident that the talks will eventually lead to a two-state solution,” he said. “We could be two good neighbors that cooperate and support one another in the fight against terrorism and piracy. We could also cooperate on issues related to trade, security and freedom of movement between the two independent states.”