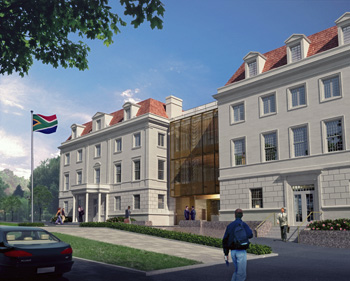 Sometimes a building is just that: a brick-and-mortar structure used for utilitarian purposes. But other times, a building is much more than a simple structure — it’s a symbol, and one that can speak to the traditions, values and aspirations of the organization and people within its walls.

That’s what South African Ambassador Ebrahim Rasool hopes for the two buildings that have long served as the country’s diplomatic presence in Washington and are approaching the end of a multiyear renovation.

“Up until now, we have been entirely housed in a beautiful, historic set of buildings — but nothing that speaks about the new aspirations of our nation and how we represent that architecturally,” Rasool said during an interview from the embassy’s temporary offices in the Intelsat building in Van Ness.

That will soon change, he told us, as the embassy prepares to complete a two-year renovation on the pair of buildings along Massachusetts Avenue that had long served as the ambassador’s residence and chancery. But more than simply offer the growing South African diplomatic delegation a more modern workspace, Rasool said he hopes that they will serve as a physical testament to what South Africa was and is becoming.

The renovations began out of necessity, he explained. Both buildings were showing their age — they are each more than 70 years old — and the staff, now approaching 80, was no longer able to fit in the one building used as a chancery. Additionally, said Rasool, the 2008 recession and housing market crash provided South Africa with a good opportunity to purchase new properties — new homes for the ambassador and deputy chief of mission — and invest in an overhaul of its buildings.

But as his predecessor, Ambassador Barbara Masekela, began the work of planning and overseeing the work, a broader plan of using the buildings to convey a larger message about South Africa was hatched.

“True to the South African metaphor occasioned by Mr. [Nelson] Mandela when he was released from prison, the theme of reconciling I think is the resonant one,” said Rasool, who has served in Washington since 2010. “For one, it is not a simple abandonment of everything that is old, so just like we’re building the new South Africa of foundations which are there despite our history, our renovation will continue to reflect the historical beauty of the two existing buildings. However, we will give it an entirely new content inside.”

More than a modern interior, though, the new embassy’s most striking — and contrasting — addition will be a glass-and-steel atrium that will connect the two buildings. The atrium will be used for cultural functions and exhibitions and, as Rasool tells it, best exemplifies the attempt to use the renovated embassy to convey the message that South Africa is both traditional and modern.

“The most important aesthetical statement is that resting on the two historically old buildings is a post-modern atrium, all of steel and glass, that will not only expand the two [buildings] but rest on the two. That will, in an exterior sense, reflect the aspiration of our people, and I think the sum total is that we are historically rooted but we are able to almost transcend it in post-modern ways by remaining on firm old foundations but with completely with new, modern vistas opening up for us,” he said.

Those new vistas surrounding the 58,000-square-foot property will also include the figure of South Africa’s most revered leader, Nelson Mandela. Once the renovations are done, said Rasool, a 10-foot statue of the former president and Nobel Peace Prize winner will be placed in front of the embassy. But like the atrium itself, the statue’s placement will be symbolic in its own right — it will stand outside the embassy’s gates, a nod to Mandela’s emergence from prison in 1990 after 27 years of captivity.

“This represents Nelson Mandela’s first step out of prison. That, if anything, [is] the contribution to that work of my generation here in the mission. So we are adding a wonderful addition to the memorials that adorn the Washington skyline,” said Rasool, himself an anti-apartheid activist who first Mandela while he was detained for his activism (also see Rasool’s cover profile, “South Africa Comes of Age,” in the February 2012 issue of The Washington Diplomat).

Created by South African sculptor Jean Doyle, the statue — the first of Mandela in the United States — will join those of Martin Luther King Jr. and Mahatma Gandhi (outside the Indian Embassy) in what Rasool calls the “golden triangle of peace heroes.” It will also be placed slightly off-center relative to the embassy itself, close to a point around which anti-apartheid protests in D.C. swirled during the 1980s. “Nelson Mandela’s statue tribute there will be a tribute to all of them,” said Rasool.

The renovations — designed by architect Davis Brody Bond and implemented by Turner Construction Co. — should be completed by July, and Rasool plans an opening ceremony in September. “It’s going to be the culmination and the high point of our diplomacy in the U.S.A.,” he said. Along with the positive public diplomacy that came from South Africa hosting the 2010 World Cup, he noted, the new embassy and the Mandela statue will help further develop the strong relationship between Washington and Pretoria.

“I think it’s really a tribute to the burgeoning relationship between South Africa and the United States that our staff has grown,” he said. “I think that it’s really amazing that we are now in a position to occupy two buildings of substance.”

As for the bilateral relationship itself, Rasool says that while the two countries share many values, he has had to navigate some occasional differences.

“From a values perspective, we [are] completely aligned. I think we often had tactical differences. How would you bring a resolution in Libya? How would you manage Sudan? How would you manage Zimbabwe? I think we differed on tactics, and I think my job over these past two and a half years has been to keep everyone focused on the commonality of values so that the tactical disagreements don’t unravel a strong bilateral relationship,” he said. “I think that we’ve by and large kept that relationship afloat very, very strongly.”