Home The Washington Diplomat March 2015 Spanish Craftsmen, Designers Team Up to Bounce Back 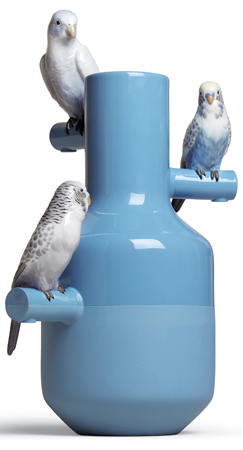 A Parrot Parade vase created by Atelier Lladró and Jaime Hayon and sculpted by Alfredo Llorens is among the 90 handmade items in “Cutting-Edge Spanish Crafts.”

The eurozone’s fourth-largest economy saw a sputter of life in 2014 with the first full-year growth since the 2008 recession. As Spain begins to see happier days in its road to economic recovery — or at least less gloomy days — its crafts industry is also seeing a bounce-back.

After a successful stint in Madrid and Elche, “Cutting-Edge Spanish Crafts, Innovation and Design,” an exhibition showcasing the convergence of craft and design in the country, opened Feb. 5 at the former residence of the Spanish ambassador in D.C., which now serves as a cultural center.

“Spain has a unique first-quality craft industry tradition. Many of these brands have been, until now, a well-preserved secret, only known by locals,” said Spanish Ambassador Ramón Gil-Casares. “In recent years we have seen an increase in the demand for the excellency of these designed artisanal products. Spanish firms and designer-makers have now started to explore new markets making these products available worldwide.”

The exhibition features 90 handmade items reflecting the artists’ latest and most memorable work, including lamps, candles, purses, jewelry and glassware. Objects range from hand-painted tiles that appear as if they came off a spaceship to strikingly simple drinking glasses.

Featured exhibitors include Ceramica Cumella, a ceramics family workshop founded in 1880 that eventually began supplying ceramics for construction and stoneware for architecture. Another part of the exhibition features the Barcelona company Cerabella, an old handmade candle factory that began to collaborate with prominent designers in the 1980s to explore different ways to play with wax. Last but not least, King Philip V’s very own Real Fábrica de Cristales de La Granja is showcased in the exhibit — one of the main glass production centers in Europe that still uses the same techniques of blowing and carving glass that it had in the 18th century, but now combined with contemporary design, of course. 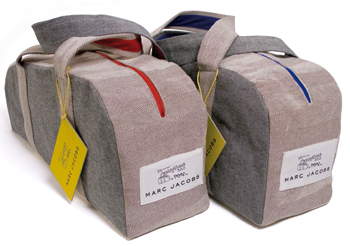 Despite the far-from-perfect economic context in Spain and the rest of the continent, consumers remain fickle as ever and still seek originality and quality in their purchases. In times where authenticity more often than not takes a backseat to mass production and efficiency, the competition is fierce.

“Crafts can’t compete on price with industrial series, but it can win the design and quality battle, since there are some touches, finishes or fancy details that can only be achieved if made by hand,” said exhibition curator and journalist Tachy Mora, whose book, “Cutting-Edge Spanish Crafts,” forms the basis of the exhibit.

To set themselves apart and stay afloat in a saturated market, artisans in Spain specializing in everything from wooden furniture to leather products have had to think outside of the box and innovate in terms of product, process and markets they aim to reach. This is where the talent of designers has come in handy for many. 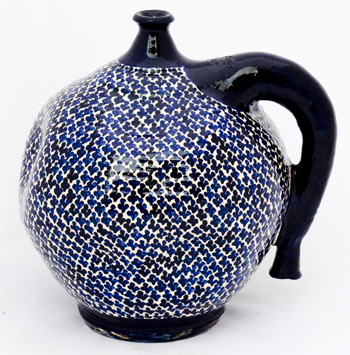 Chupacharcos with renaissance decoration, a piece traditionally used to skim water from the surface of ponds or small streams in dry zones of Andalucía.

Designers are also benefiting from these partnerships. Many have found it difficult to succeed in their own competitive industry, but teaming up with craftsman offers an opportunity to participate in high-quality production by hand or pave their own ways as artisans. This kind of collaboration has also successfully trickled over into other areas such as architecture and even gastronomy.

“We must bring design, craftsmanship and research into new materials together with manual or industrial production systems to achieve beauty without sacrificing functionality,” said Enrique Loewe Lynch of the Loewe Foundation, one of the exhibiting organizations, in the foreword to Mora’s book.

The book, written in 2011, features artisans, designers and companies who are at the forefront of Spanish crafts today, many of whom make an appearance in the D.C. exhibition. They are recognized for their collaboration with designers and careful attention to aesthetics while maintaining a certain caliber of excellence that has helped propel Spanish craftsmanship onto the world stage.