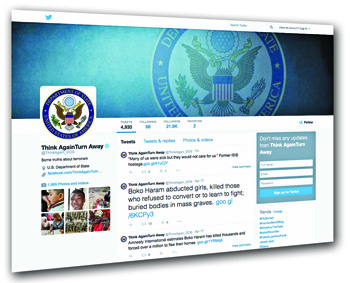 It was never going to be easy for Washington and other governments to counter the toxic online narrative of the so-called Islamic State. The terror group is amorphous and can enlist any of its legions of sympathizers to trumpet its murderous cause. Any counter-messaging campaign bearing the obvious stamp of a Western government looks suspicious and can lack credibility with potential recruits.

Yet communications experts say this online tug of war can, to a certain degree, affect the flow of foreign fighters into Iraq and Syria, and that it matters symbolically for U.S. relations with majority-Muslim countries.

“Trying to just find ways to inject counterbalancing information and perspective into the middle of these online networks is very important,” said Philip J. (P.J.) Crowley, a former State Department spokesman who is now a professor at the George Washington University’s Institute for Public Diplomacy and Global Communication. However, he added, “to the extent that that generates a debate and that pulls people back from the brink, those positions of influence are likely to be people [who] are far closer to individuals tempted by the Islamic State than we are.”

The State Department’s Center for Strategic Counterterrorism Communications (CSCC) is the tip of the spear for the U.S. propaganda war against the Islamic State (also known as ISIS). The center predates the group’s burst onto the world stage in 2014; President Barack Obama’s 2011 executive order setting guidance for CSCC focuses on countering al-Qaeda and its “affiliates.” Though it grew out of an al-Qaeda affiliate in Iraq, the Islamic State has morphed into something altogether and split off from its parent group.

With a reported budget of $5 million and staff of about 50, the CSCC has gone about trying to blunt the Islamic State’s online influence in part through Twitter. The paternal-sounding “Think Again, Turn Away” account tweets everything from news stories warning of the Islamic State’s territorial advances and losses, to those describing disaffected fighters who have left the terror group, to apparent success stories of de-radicalization in Europe.

The CSCC Twitter account also goes beyond news regurgitation and does its own stylizing. In tweeting a story on young Canadians who joined the Islamic State, for example, the CSCC communications staff overlaid a photo of the suspects with a grim quote from one of their mothers lamenting the loss of her son to the group.

The CSCC account uses Twitter slang and appears to consider “trolling,” or targeting another account with disparaging tweets, part of its mandate. The CSCC on one occasion tagged an apparent Islamic State sympathizer, whose account has since been suspended, with a tweet denouncing the terror group. “#ISIS is NOT the solution,” the tweet reads. “Its spread has worsened social ills — more homelessness, illness, starvation, poverty, death.”

The prominence of the State Department seal on the CSCC’s Twitter and YouTube accounts is another unsubtle aspect of the center’s approach to social media. Nearly all of the 16 videos CSCC has posted to its YouTube channel to date end with a “Think Again, Turn Away” caption and the State Department seal. That obvious branding can lessen the impact of a video with a good counter-narrative refuting the Islamic State’s religious credentials, according to Daniel Cohen, a research associate at the Institute for National Security Studies, an Israeli think tank. Why would a potential Islamic State recruit listen to something that is so obviously U.S. government messaging, he asked.

CSCC staff faces an uphill battle not only in the quality of its messaging, but in the quantity as well. While Twitter suspended the accounts of at least 1,000 Islamic State sympathizers between September and December 2014, there were at least 46,000 such accounts in existence during that time, according to a Brookings Institution study.

“We’re getting beaten on volume, so the only way to compete is by aggregating, curating and amplifying existing content,” Richard Stengel, undersecretary of state for public diplomacy and public affairs, told The New York Times in February. The article said CSCC would harness the voices of “prominent Muslim academics, community leaders and religious scholars who oppose the Islamic State … and who may have more credibility with ISIS’ target audience of young men and women than the American government.”

But amplifying Muslim voices has inherent limits — the most obvious of which is that hard-line jihadists don’t exactly listen to those voices. Prominent Muslim clerics around the world have already condemned the group’s brutality. A tweet — whether by an American diplomat or a Muslim preacher — denouncing a beheading is hardly likely to sway Islamic State fighters who believe their bloody crusade is religiously and historically justified.

Against this backdrop, Stengel, a former managing editor of Time magazine, has attracted attention for his efforts to target the Islamic State online. Stengel says the U.S. had no choice but to venture into the digital arena that the group had commandeered. “We have to be tougher, we have to be harder, particularly in the information space, and we have to hit back,” he told The New York Times last September.

Stengel said through a spokesperson that he was unavailable over the course of two weeks to be interviewed for this article. The spokesperson also declined to answer basic questions about CSCC’s budget and functions.

The Obama administration is trying to boost the CSCC’s modest resources. The State Department’s fiscal 2016 budget request calls for $1.3 million for the center’s Communications Integrated Analysis section while noting the section is only “minimally staffed” with two intelligence officers and two State Department civil servants.

CSCC’s goal is ambitious: to coordinate counterterrorism messaging across the federal government and integrate the many individual accounts held by various departments, embassies and officials. But doubts persist as to whether the center can streamline the government’s counterterrorism outreach on a shoestring budget, and its lofty, ill-defined mandate is likely to provoke turf wars with the Pentagon, Homeland Security Department and other agencies with overlapping missions.

The CSCC’s critics also say that yet another government entity will only add to a clunky bureaucracy that is no match for an agile terrorist group whose followers are adept at capitalizing on the fast-paced, viral nature of social media. Both public officials and private companies have a difficult time keeping up with this virtual reality, where one crudely made video can ricochet around the web in seconds and as soon as one site is suspended, another five pop up in its place.

On that note, the Islamic State’s digital rise has sparked a larger debate over free speech and the benefits of shutting down terrorist-related sites, which could potentially yield valuable intelligence. There are also concerns that the State Department’s online offensive risks legitimizing Islamic State followers and their savvy, but at-times unsophisticated, social media campaign.

Social media is but one part of the battle to counter extremist narratives, and government-sponsored voices are but one part of that cacophony. Though the Obama administration has highlighted the importance of the CSCC, current and former officials have not cast it as a panacea.

“Unfortunately, as we all know, the government is probably not the best platform to try to communicate with the set of actors who are potentially vulnerable to this kind of propaganda and this kind of recruitment,” Nicholas Rasmussen, the director of the National Counterterrorism Center, told the Senate Intelligence Committee in February. (The CSCC coordinates its analysis and policy planning directly with the National Counterterrorism Center.)

Farah Pandith, who until January 2014 served as the State Department’s first envoy to Muslim communities, echoed Rasmussen’s point in an interview. “The most credible voices in pushing back against extremists are not government voices,” she said.

“The concept of the United States government pushing back against ideology can only go so far,” Pandith said, adding that a successful counter-narrative to extremism will come from “nongovernment actors who are quick and nimble and fast” and are able to reach the target audience of young Muslims.

That narrative needs to be driven by young Muslims, she said, noting that the U.S. government is up against a formidable online foe in the Islamic State. “While we’re taking baby steps” in directing messaging at millennials, groups such as the Islamic State are “running marathons,” she said.

The U.S. government can set up a framework for dialogue, but at some point needs to step back and let grassroots voices carry that dialogue forward, said Pandith, who is now an adjunct senior fellow at the Council on Foreign Relations. She cited Sisters Against Violent Extremism, a program begun in 2008 that the State Department has funded. SAVE started with U.S. government support but is now a full-fledged NGO based in Vienna that offers a forum for female voices against extremism, Pandith said.

There is also Generation Change, a program Pandith helped establish in 2010 that highlights talented Muslim youth as role models for their generation. “Those are the kind of programs that the U.S. government should be doing far more of,” she told us, cautioning current U.S. officials against focusing too much on messaging and not enough on what she said were more meaningful cultural exchanges.

Though social media may only get anti-extremism narratives so far, detailed analysis of these networks might offer clues to more effectively countering them. Step back from the torrent of daily tweets sent out by Islamic State supporters (133,422 per day, according to the Brookings study) and a pattern of how the group communicates with its followers emerges.

The Islamic State follower base on Twitter, for example, is “very internally focused,” wrote J.M. Berger and Jonathon Morgan in the Brooking study. The authors also found that Islamic State-supporting accounts had an average of about 1,000 followers each, considerably higher than the ordinary Twitter user. Much of the group’s social media success, in fact, can be attributed to a relatively small group of hyperactive users, numbering between 500 and 2,000 accounts that tweet in concentrated bursts of high volume, the study said.

For its part, the CSCC wants to burrow deeper into the Islamic State’s web of online influence. “Additional funds are needed to research operations-applicable best practices and emerging technologies in the areas of counter-radicalization and target audience messaging,” says the agency’s fiscal 2016 budget request.