Home The Washington Diplomat May 2015 Op-Ed: Abe Comes to Town Bringing A Message: Japan Is Rising 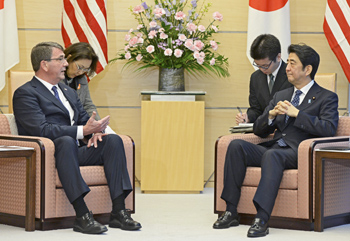 For a world consumed by conflicts in the Middle East and Europe, America’s rebalance to Asia may seem like a lost cause, or secondary concern. U.S. troops continue to be stationed in Afghanistan, while years of security partnerships in Yemen are quickly unraveling. The flagship policy initiative of President Obama’s rebalance, or “pivot” — the Trans-Pacific Partnership free trade agreement — has caused a major rift within his own party. Despite the conflicts and tensions between the different regions drawing America’s focus, there remains a way to bring U.S. foreign policy in both Asia and the Middle East together.

Japan is rising and the United States can rise with it. After 20 years of economic stagnation and a decade of political malaise, Shinzo Abe, Japan’s energetic prime minister, is bringing Japan back into the role of central actor on the world stage. Now in his second incarnation as prime minister, Abe has firmly signaled to the world that Japan is back by visiting over 50 countries in his first two years in office. As he visited Washington, D.C., in late April, and addressed a joint session of Congress, he sought to confirm Japan as a fully engaged shaper of the international order and a vital partner of the United States for years to come.

The United States remains Japan’s indispensable ally and in turn Tokyo plays a key role as Washington’s most important ally in Asia. As the world’s fourth-largest economy, one of the biggest donors of international aid and home to many of the world’s most respected multinational businesses, Japan can reinforce global norms and the existing international order led by the United States.

While Abe remains a staunch, much-needed friend to Washington in a region where China is making inroads, both as a global power and a regional force, his muscular, hawkish policies have naturally rankled Japan’s neighbors, given the country’s World War II legacy. Abe has prevaricated on Japan’s wartime atrocities, and as the 70th anniversary of the end of World War II approaches, many wonder if he’ll try to whitewash Japan’s brutal past, sparking an outcry among U.S. allies such as South Korea. The prime minister’s efforts to beef up Japan’s strictly defensive military posture have also made neighbors nervous — and prompted deep self-reflection at home.

Yet, often overlooked in the contentious debate about Japan’s collective self-defense guideline revisions is the broader security policy reform currently taking place in Tokyo. The Abe administration has sought to diversify Japan’s traditional partnerships and policy instruments by pursuing a grand strategy of connectivity among democracies, while balancing its pragmatic relations with other states. This strategy begins with Japan’s newly established National Security Council and employs the use of a variety of levers, including foreign aid, defense and multilateral diplomacy, in a way unique for Japanese foreign policymakers that have traditionally not leveraged these instruments.

Japan has benefited tremendously from the U.S.-led rules-based order established after World War II and now seeks to stand up to the threats that are challenging this order by strengthening its ties with other countries, especially other democracies. Enhanced cooperation with Australia, India and the Association of Southeast Asian Nations (ASEAN) more broadly reinforces the possibilities for further cooperation between D.C. and Tokyo with these trilateral engagements.

Japan’s determination to be a global actor is underscored by recent contributions to international efforts in combating the so-called Islamic State and the ongoing crisis in Ukraine. Japan joined the United States and Europe in implementing sanctions against Russia. This position ran contrary to the prior Japanese goal of settling its longstanding territorial dispute with Moscow and securing much-needed energy resources from Russia. While Japan’s increased global profile has not come without controversy or tragedy, witnessed most starkly by the recent public killing of two Japanese hostages by the Islamic State, Tokyo continues to move forward with initiatives that put the Japanese squarely in these conflicts.

Ultimately, Abe’s successful reentry onto the world stage will hinge on his much-vaunted “Abenomics” strategy aimed at resuscitating the sluggish Japanese economy through stimulus spending, monetary policy and structural reforms. The success of this daunting task will likely determine whether Abe will have the political capital to sustain Japanese leadership abroad. There is little public domestic appetite for Japan’s international leadership role if direct interests are not at stake. Thus it is vital for Abe’s Washington agenda to try and conclude the Trans-Pacific Partnership as soon as possible and to clarify the benefits of its various new trilateral partnerships with the United States involving Australia, India and Southeast Asia.

From India’s triumphant Narendra Modi to Israel’s divisive Benjamin Netanyahu — and a U.S. presidential administration in its twilight — Washington has seen an unprecedented flurry of highly anticipated and consequential state visits. Prime Minister Abe’s visit this spring will be among the most important. With Japan’s growing eagerness to participate on the world stage financially, technologically and strategically, Washington has a once-in-a-generation opportunity to capitalize on a trusted partner in Tokyo with vested interests that align with, rather than diverge from, its own strategic priorities. By capitalizing on Abe’s visit, the Obama administration’s rebalance can yet be set right again and America, with Japan’s support, be a leader in the Pacific.

Dr. Joshua W. Walker is the Japan lead at the Asia Program of the German Marshall Fund of the United States and previously served as a senior advisor to the State Department. This piece is adapted from a longer German Marshall Fund report by Walker and Sharon Stirling-Woolsey titled “Japan’s Global Re-Emergence: How Japan’s Active Diplomacy Strengthens the Foundations of the U.S-Japan Alliance.”