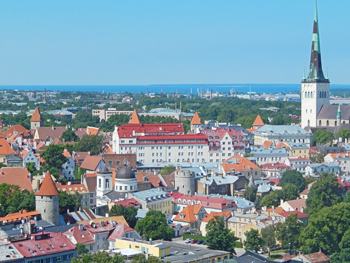 TALLINN — Like many countries working with foreign investors, Estonia has long faced the challenge of making the process as seamless as possible. The small Baltic country, known as the “tech capital of Europe,” boasts a strong domestic digital architecture that was, until recently, limited to its residents.

But the government’s new “e-residency” program, the first in the world, strives to make the Estonian digital identification process, protected by some of the world’s strictest standards, available to non-Estonian residents.

The program is primarily designed to offer foreigners living abroad access to the nation’s extensive digital services, which are among the most sophisticated in the world and allow Estonian citizens to file taxes, manage bank accounts, register companies, vote and even check their medical records.

Estonia’s capital of Tallinn boasts historic, medieval architecture, but the innovative Baltic country is also known as the “tech capital of Europe.”

The e-residency, passed unanimously by parliament last October, is a secure, state-issued digital identity geared toward nonresidents who already hold business interests in Estonia. It allows for digital authentication, and the digital signing of documents, and helps expedite access to banking, corporate registrations, taxes and other services. It is not a path to citizenship or legal residency, and it isn’t a travel document. But e-residency does open up a whole new digital frontier to foreigners who can, for example, start an online business under an Estonian domain, maintain an Estonian bank account or even fill digital prescriptions in Estonian pharmacies.

After clearing an application and background check, as well as an in-person identify verification process that includes a 50 euro fee, e-residents will receive a digital ID card that contains their biometric information and a digital signature that’s valid throughout the European Union. According to a report in the Guardian, the government hopes to attract around 10 million “digital citizens” by 2025.

It’s only the latest innovation for a country of 1.3 million that is striving to revolutionize tech on a global scale; a country where Skype was born; where the international currency trader TransferWise is disrupting the banking industry; and where tech entrepreneurs can develop a new product or application from idea to prototype over the course of a weekend boot-camp called Garage48.

“We’ve gotten to the point where there is such a strong public expectation that we are doing interesting IT things that, if anything, if there aren’t new ideas on the table, there are public complaints,” Luukas Ilves, counselor for digital affairs at Estonia’s Permanent Representation to the EU, and the son of Estonia’s president, said in an interview at the Estonian Embassy in Washington, D.C.

Like any tech pipeline, Estonia’s is vast, with many projects in multiple stages at any given moment. The country’s “data embassies” cyber-security plan is being developed as a long-term initiative to protect its citizens’ information in the event of a cyber attack, namely from Russia. The idea is that data embassies, in the form of off-site remote servers and cloud technology, would be given the same protection as traditional foreign missions. However, the e-residency plan is more benign and is all about removing barriers, rather than putting additional ones in place.

“The e-residency has a true sense of justification. There’s the immediate and practical need, which is people who, already now, have some kind of relationship in Estonia,” Ilves said.

The program has benefits that reach far outside Estonian borders, and across the European Union, where mutual recognition policies and enhanced integration services are becoming the norm.

“The portion of the world that owns a business in Estonia, and needs our platform for doing business, is going to be small,” Ilves said. “But there’s a lot of value to the Estonian system in regards to our standards of verification and digital security. The idea is, by offering access to e-residency, you’re not only offering access to Estonian services, but you’re also giving them … an authentication that can be recognized throughout the EU. So that with the Estonian e-residency, a document is not just recognized by the Estonian authorities, but by the German, Portuguese, Dutch, Austrian authorities, etc.”

Also hard to overlook is the cool factor. In an interview at his office in Tallinn, Taavi Kotka, the deputy secretary-general of ICT at Estonia’s Ministry of Economic Affairs and Communications, said that he expects interest in the program not only from people who are already doing business in Estonia, but from those who simply want to be part of the latest digital trend.

“Definitely those who actually participate in Estonian economy. Most of the people from Nordic [countries], of course they are happy to register and they will start using their e-residency from day one,” Kotka said. “But most of the first wave definitely did it because it was cool.”

A wait list and early registration period opened in October, and Estonia officially began accepting in-country applications Dec. 1. On April 1, people could apply at all Estonian representations that provide consular services, and an online application function is expected to be rolled out in May.

In the first four months of the program, 18,000 people expressed interest by joining the mailing list, and the program received 1,325 applications, of which 1,197 were approved by April 1. (As of press time, my application will also have been made.)

As more and more countries develop their own national solutions for digital identities according to EU standards, the scope of the Estonian e-residency program will expand dramatically. For global citizens, especially those who spend significant time in Europe, Estonia’s e-residency may become as vital as a passport, even if it doesn’t confer citizenship.

“In the very long run, we see this as a step to not needing to have an e-residency anymore, because everyone in the world will have a strong electronic identity,” Ilves said.

Molly McCluskey (@MollyEMcCluskey) is a contributing writer for The Washington Diplomat who lives between Washington, D.C., and various cities in Europe.