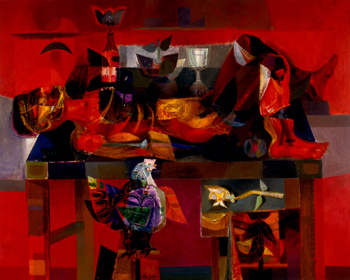 In this town, few things can escape the tinge of politics, and art is no exception. International institutions throughout Washington, including embassies and organizations such as the Inter-American Development Bank and the Organization of American States (OAS), have arts and culture sections to further their work.

The Art Museum of the Americas, housed at the OAS, launched “Libertad de Expresión: The Art Museum of the Americas and Cold War Politics” as a reminder of which side of history the OAS was on during that conflict — a particularly timely reminder considering that the United States finally seems to be turning a page on its troubled past with a former Cold War adversary.

Alejandro Obregon’s 1956 “Estudiante Muerto (El Velorio)/The Dead Student (The Vigil),” is among the works featured in “Libertad de Expresión: The Art Museum of the Americas and Cold War Politics.”

A few weeks after the exhibit debuted, the OAS hosted the seventh Summit of the Americas in Panama City, where President Obama met with Cuba’s Raúl Castro in the first face-to-face meeting between a U.S. and Cuban head of state in nearly 60 years, signaling a historic thaw in the frosty relationship.

Despite a Republican backlash, Obama is pressing ahead with his diplomatic rapprochement, lifting the U.S. designation of Cuba as a state sponsor of terrorism, a move that could precede the reopening of a U.S. embassy in Havana. But old habits die hard, and Obama’s outreach is sure to run into stiff resistance from America’s Cuban exile community, a vocal and powerful voting bloc.

“Libertad de Expresión” espouses the Cold War-era tug of war whose ideological battles still resonate to this day. The exhibit draws on the work of the museum’s founding director, José Gómez Sicre, a Cuban-born lawyer, art critic and author whose OAS career began as a visual arts specialist with the group’s precursor, the Pan-American Union, in 1946. According to the OAS, Gómez Sicre’s approach to cultural diplomacy “championed artists sympathetic to international trends in contemporary art, with the intention of demonstrating the cosmopolitanism in the Caribbean, Central and South America and the United States, while also emphasizing freedom of expression.”

That included influential styles and movements such as surrealism, concretism, art informel and abstract expressionism, along with experimental forms and themes inspired by pre-Columbian civilizations. The exhibition features more than 60 artists, including Joaquín Torres-García, Roberto Matta and Jesús Rafael Soto.

Gómez Sicre spent several decades working to introduce U.S. audiences to Latin American art, which he said was largely defined by “diverse and at times even antagonistic physical and spiritual geographies.” He also lauded the “diversity of expressions” that contemporary artists used to explore notions of identity and the modern experience.

But this diversity of expression rarely included communist or socialist voices, whose artwork Gómez Sicre refused to display in the OAS museum. For the Cuban-born writer, who studied at New York University and Columbia, celebrating the communist revolution that took over Cuba would’ve betrayed the OAS’s democratic ideals.

The OAS was founded in 1948 to push democracy throughout the Americas, a mission that in recent years has been eroded by political squabbling — perhaps an inevitable consequence of trying to represent 35 member states with vastly different agendas.

“The OAS has undertaken multiple initiatives to monitor human rights, provide electoral oversight, promote development and enhance security in the region,” writes the Council on Foreign Relations in a recent backgrounder. “[I]t has also come under fire as ineffectual and inconsistent in applying its democratic principles. Ideological polarization and mistrust of the OAS have prompted doubts over its relevance in the region and spurred the creation of competing regional groups.”

Leftist states such as Venezuela have long complained that the OAS serves as the mouthpiece of the United States, the group’s biggest financial backer. Conversely, U.S. officials accuse Venezuela and other member states of thwarting attempts to monitor elections or investigate human rights abuses, diluting the bloc’s democracy-promotion mandate. The result: an unwieldy, toothless bureaucracy that operates on consensus — and rarely achieves it.

The OAS’s unanimous decision-making structure has allowed members to block various democracy initiatives, but at the same time, the distrust that many Latin nations feel toward Washington is hardly surprising. The U.S. has a long tradition of plotting to overthrow unfriendly regimes throughout the hemisphere, and using art as part of that strategic arsenal is nothing new. The CIA has admitted to engaging in covert operations to spread American abstract expressionist art around the world in its cultural struggle with the Soviets.

“We wanted to unite all the people who were writers, who were musicians, who were artists, to demonstrate that the West and the United States was devoted to freedom of expression and to intellectual achievement, without any rigid barriers as to what you must write, and what you must say, and what you must do and what you must paint, which was what was going on in the Soviet Union,” said Tom Braden, the first chief of the CIA’s International Organizations Division, in an interview with The Independent.

Much more recently, culture and politics collided when USAID reportedly tried to infiltrate Cuba’s underground hip-hop movement in an almost-comical attempt to stir unrest among the population.

The hip-hop fiasco shows there’s still plenty of profit to be made off a dying Cold War-era propaganda war. The Art Museum of the Americas likes to think it holds a more subtle — and legitimate — place in the annals of that war, serving as a venue to showcase an eclectic array of Latin American artists.

And while its founder, Gómez Sicre, allied himself with the U.S. cold warriors of the day, the museum he helped build is busy looking to the future. Its current director, Andrés Navia, said he is focused on bringing more international attention to the museum’s permanent collection and highlighting its role and relevance in supporting the mission of the OAS (previously, he worked on cultural tourism projects in the Maya region at the Inter-American Development Bank).

“Libertad de Expresión” looks back on a key part of the museum’s past in an effort to keep that mission relevant for a post-Cold War world.

Libertad de Expresión: The Art Museum of the Americas and Cold War Politics