Home The Washington Diplomat May 2015 Waterway to Nowhere? Nicaragua Banks on Chinese-Financed Canal 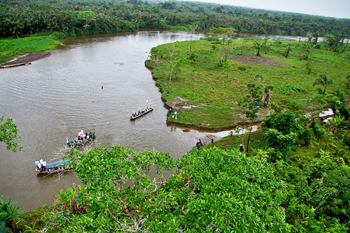 China plans to bankroll what could become the world’s most expensive civil engineering project in a country where it doesn’t even have an embassy.

The Río San Juan, near the disputed Isla Calero wetland, is claimed by both Costa Rica and Nicaragua, which is building a $50 billion interoceanic canal in the area.

Backers of a proposed $50 billion canal linking the Atlantic and Pacific coasts say it’ll offer shippers a modern alternative to the century-old Panama Canal while creating tens of thousands of high-paying jobs in Nicaragua, the poorest nation in Latin America. Opponents, meanwhile, say the 170-mile waterway will devastate Central America’s largest freshwater lake and do absolutely nothing for Nicaragua’s long-term prosperity. Others dismiss the audacious project altogether as a pipedream that will never happen.

Recently, three anti-canal activists traveled to Washington to speak at the nonprofit Inter-American Dialogue, where they outlined their skepticism to the massive project on legal, environmental, economic and moral grounds.

“This canal is illegitimate, moved forward by a dictatorship and handled with total secrecy,” complained Sofía Montenegro Alarcón, political coordinator of the Movimiento Autónomo de Mujeres de Nicaragua (Autonomous Women’s Movement of Nicaragua). “Basically, it sells Nicaragua’s territory and its people to an unknown Chinese concession with power unheard of in the history of Latin America.”

She added: “The concession says whatever land or resources are needed for this project can be expropriated. The regime is not accountable — not to Nicaraguans, not to anybody. We are trying to interest people here in Washington and the U.S. media to focus their eyes on Nicaragua and help us.”

Montenegro appeared with Luis Carlos Buob, a lawyer with the Costa Rica-based Center for Justice and International Law, and Pedro Alvarez, an engineering professor at Houston’s Rice University. The three made their case before 100 or so people at a March 17 event moderated by Nicaraguan-born economist Manuel Orozco, a senior fellow at the Dialogue.

“Two years have passed without any real debate. The Sandinistas are negotiating in secret,” Buob said, referring to the populist party that overthrew the Somoza regime in 1979 and has controlled Nicaragua for most of the time since then.

Buob said the proposed canal would displace up to 119,000 people from their homes, and that in three impoverished municipalities alone the waterway would result in the destruction of 2,800 private dwellings along with 96 schools, 19 health centers, 35 cemeteries and 90 churches.

“The Nicaraguan government began this project without any kind of prior consultation, even though 52 percent of this canal affects indigenous people,” he said, noting the “violent repression and stigmatization of citizens who disagree with the canal.”

Officials in Managua counter that the canal could potentially double the size of the country’s economy, while making Nicaragua a global shipping hub. Besides the canal itself, President Daniel Ortega’s leftist Sandinista government says the project will encompass two large ports and a railroad connecting those ports, along with free trade zones, new roads, bridges, an airport and other infrastructure. 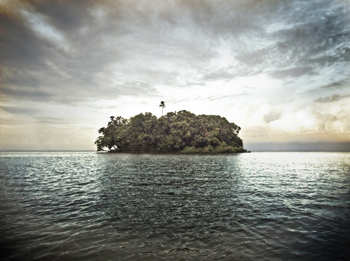 A small, volcanic tropical island sits inside Lake Nicaragua, the largest tropical freshwater lake in the Americas and an important source of drinking water. Critics of Nicaragua’s planned canal say the large-scale project threatens the health of the lake.

The obscure consortium behind the large-scale endeavor, Hong Kong Nicaragua Canal Development Investment Group (HKND), claims that upon completion in 2019, its waterway will be able to accommodate ships of up to 23,000 twenty-foot-equivalent units (TEUs). That compares with the 13,000 TEUs the Panama Canal will be able to handle after its $5.2 billion expansion is finished in 2016.

“They hope to charge $1 million per ship, but the Panama Canal has never charged more than $300,000,” Alvarez pointed out. “Sometimes you do things not necessarily because there’s a business case. Who knows if what’s really at stake here is energy security for China, which is not yet transparent.”

In fact, it’s not at all clear what China’s role is in the lofty venture. In December 2014, Chinese businessman Wang Jing, the CEO of HKND Group, inaugurated construction of the so-called Nicaragua Grand Canal on the country’s Atlantic coast. Wang was given a 50-year concession to build and operate the canal, according to a recent report in Al Jazeera America, with the option to extend the contract for another 50 years.

Not much else is known about the telecommunications magnate or who his other investors are — or, for that matter, whether the canal has state backing from Beijing. Critics question whether Wang can come up with the money for the project — construction for it has scarcely begun and the exact route has yet to be determined — let alone whether he can complete it in the ambitious five-year timeline he’s laid out.

Clement Leung, Hong Kong commissioner for economic and trade affairs in the U.S., said he’s not familiar with HKND and had no information about the entity other than what he’s read in the media.

It seems somewhat paradoxical that China would pour so much money into a country that doesn’t officially recognize it. There is no Chinese Embassy in Managua, nor is there a Nicaraguan Embassy in Beijing. The Nicaraguans instead maintain diplomatic relations with Taiwan — one of only 22 countries that still do — a holdover from the pre-Sandinista days when Nicaragua was still staunchly anti-communist.

China has, however, made significant investments in Latin America, and Nicaragua could become its latest inroad. Mónica López Baltodano, a Nicaraguan attorney, warns that the canal represents a new form of colonization and says that 16 “briefcase companies” would benefit from the opaque deal.

“All of them were registered in Hong Kong, the Cayman Islands and the Bahamas for $400 each, at most. How did they receive such a concession?” she told attendees at the Inter-American Dialogue event. “I understand that HKND won’t pay any taxes for 160 years. They propose to create 25,000 jobs, but the direct payment Nicaragua receives will be no more than $100 million for the whole life of the concession. I don’t see any sense in portraying this project as solving any economic problems when we’re getting nothing out of it.”

Francisco Obadiah Campbell Hooker, Nicaragua’s ambassador to the United States, confirmed that the Inter-American Dialogue invited him to the panel but that he turned the group down, telling The Washington Diplomat it was “not interesting” to him — even though he’s attended numerous other Dialogue presentations in the past.

Beyond that, Campbell refused to comment on any aspect of the canal. In contrast, a growing number of Nicaraguans are speaking out against the project — and against a president they have long supported. 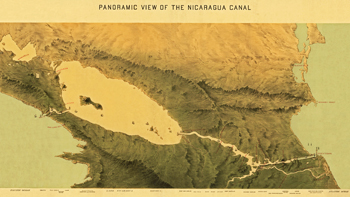 An 1870 map shows a plan for the Nicaragua Canal drawn up by Julius Bien & Company. The dream of an interoceanic canal in Nicaragua has existed, in one form or another, for nearly 200 years.

Ortega, a former Sandinista guerilla leader who lost power in 1990 but regained the presidency in 2006, remains a popular figure. He’s largely dispelled fears that his leftist, anti-capitalist rhetoric would drive away foreign investment. In fact, under his rule, the economy has steadily grown and tourism has increased, while crime and drug trafficking have plummeted.

At the same time, Ortega, now in his third term, has been criticized for cracking down on dissent and changing the constitution in a blatant power grab. Yet he retains a strong base of support among working-class and poor Nicaraguans, even while he continues to court big business.

Polls indicate that a majority of Nicaraguans back the canal and the economic boon it promises (70 percent of the population lives on less than $4 a day). Indeed, parts of the canal route are sparsely populated or struggling with poverty, and could use an injection of cash and development.

But Ortega’s vision for a grand waterway is causing a rift with his traditional supporters, including the rural campesinos who could be displaced by the project. Dozens of protests have broken out among farmers who warn that the megaproject — whose no-bid concession was rushed through with no public debate — might not only upend indigenous communities, but could also wreak unintended environmental damage.

Alvarez of Rice University said Nicaragua’s proposed canal would be twice as deep and four times as long as the Panama Canal, requiring the dredging of some 1.2 billion tons of sediment. That could seriously threaten the health of Lake Nicaragua — the largest tropical freshwater lake in the Americas and an important source of drinking water — through which 60 miles of the canal would pass.

“These sediments contain a lot of nutrients and organic matter, creating a dead zone devoid of dissolved oxygen where no aquatic life can persist,” the engineering professor warned. “And the dredging would have to be recurrent, because of the traffic of 5,000 ships passing every year. Increased turbidity represents a threat to the unique freshwater sharks that need to see in order to hunt, not to mention invasive species brought by transoceanic ships.”

The explosion of zebra mussels in the U.S. Great Lakes has cost $250 million to clean up, Alvarez noted. But that’s nothing compared to the worst-case scenario — an oil spill that could devastate Lake Nicaragua since there would be no room for dispersion.

“A benefit-cost analysis is urgently needed that monetizes this loss of ecosystems and water security, which has implications for food security,” Alvarez warned. “It is incumbent upon scientists, NGOs and human rights activists to halt construction until such a comprehensive independent analysis demonstrates the sustainability of this megaproject. The burden of proof lies on the proponents.”

Whether the canal is actually built is another story. For nearly two centuries, the dream of a transoceanic canal across Nicaragua has been just that — a dream.

“They are promising you a delicious cake, and you cannot bake a delicious cake if you use rotten eggs,” Alvarez said. “The cost of this canal is at least five times Nicaragua’s GDP. So if it’s really about sustainability, there are better ways to accomplish this.” 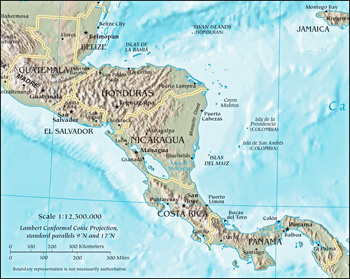 The feasibility of the project — or lack thereof — may have been why U.S. officials decided not to bring it up with Ortega during the April 10-11 Summit of the Americas in Panama City, which was attended by the leaders of all 35 nations in the Western Hemisphere.

“We don’t necessarily plan to have a direct conversation with representatives of the Nicaraguan government,” said Roberta Jacobson, U.S. assistant secretary of state for Western Hemisphere affairs, in response to a question from this reporter about the canal.

“But we’ve certainly been very clear,” said Jacobson, speaking April 3 at the Brookings Institution. “Our position on the canal has always been that it be done in a way that is transparent and responsive to the concerns of Nicaraguan citizens — [not only] environmental and land issues, but those that may come up along the way. The problems we’ve seen have been a lack of transparency both in bidding and procedural issues, and whether all of these concerns are being taken into account.”

While the U.S. response has been somewhat muted, Nicaragua’s neighbor to the south has been far more vocal about the canal.

“I’m skeptical about the project,” said Manuel González Sanz, Costa Rica’s foreign minister, during a recent visit to Washington. “I have my doubts about how real and how serious it is.

“We have a right to request environmental studies, which we have done twice already last year, but no response,” González told us. “So I understand the justification of the Nicaraguan people to be concerned, not just for Costa Rica, but the whole area.”