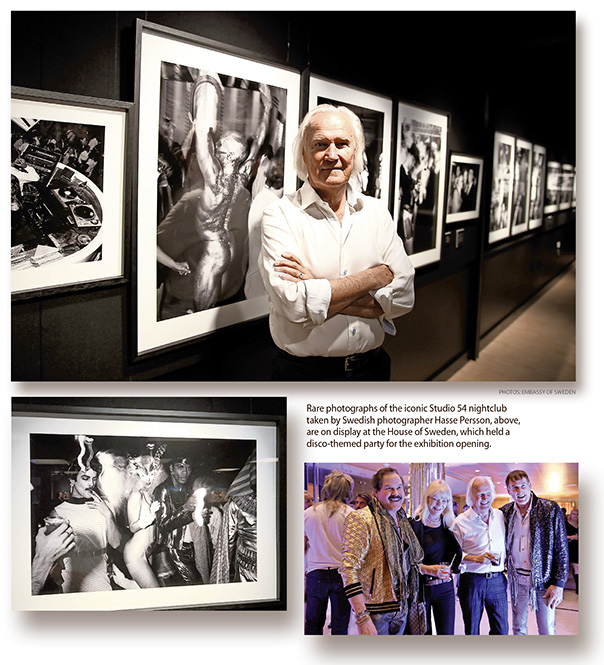 Studio 54 was a shrine to disco, decadence and debauchery. Supermodels, musicians, politicians, actors, artists and anyone in the know (including Donald Trump) converged on the exclusive nightclub during its heyday in the late 1970s — until its owners were arrested for tax evasion and the club was shut down.

The party may have ended, but the good times live on at the House of Sweden, where a new exhibit features the work of acclaimed Swedish photographer Hasse Persson, the only photographer granted access to the club after press hours. “Studio 54 Forever” showcases not only Persson’s pioneering camera technique, but also offers a rare peek inside the legendary New York hotspot.

Visitors to the exhibition’s opening night got the full Studio 54 experience as they were treated to a disco-themed party inside the glass-enclosed embassy. Persson was also on hand to talk about how he spent his nights documenting the epic partying that took place both on and off Studio 54’s dance floor.

Persson’s black-and-white photographs offer snapshots of life behind the velvet rope. Some pictures capture near-naked men and women lost amid the frenetic hedonism; others depict celebrities before they were famous. We get a glimpse of Calvin Klein and Andy Warhol in the music booth, Michael Jackson on the dance floor and a man whom some believe to be Freddie Mercury smoking a cigarette.

Persson said he often “worked with luck” to capture the right moment. He spent many long nights disappointed by his original photos. But he soon developed a new camera technique whereby the flash was left on to freeze the subject while the shutter remained open for up to 30 seconds. He said this let him capture the movement and light that made his pictures look alive, mirroring the vitality of the club-goers.

Meredith Wohl, a D.C. photographer, told us that the exhibition gave her an intimate look inside a cultural phenomenon that was seldom preserved in pictures. She was impressed by how bright and vivid Persson’s photographs were, even though they were taken in a dark environment.

“I love stylistically the technical aspects of how beautiful they are,” said Wohl. “It’s just the chaos and color of the time without any of the color at all.”

The scenes of blurred motion and fractured light take viewers back to a time before the AIDS epidemic struck New York, to a club where people left their inhibitions at the door. Sex in the bathrooms or on the balconies was to be expected at Studio 54, said Persson, while drugs such as cocaine, Quaaludes and poppers were passed around like candy. Once, there was even a live horse, which supermodel Bianca Jagger rode across the dance floor.

“It was mankind at its wildest,” said Persson.  “But you still had to behave … everything was elegant.”

Studio 54 was also a place of acceptance for the gay community, which was still largely ostracized by society at the time, said Persson. The club’s owners specified that 20 percent of the handpicked public who attended each night be gay men, and 10 percent be lesbians and transgender. To Persson, this meant the club was a “symbol of divisions melting away.”

“It was like a private party with 1,000 people every night,” he said. “I went home with a smile on my face every time.”

Despite the club’s notoriety for debauchery and drugs, Persson said the late ’70s were a more innocent time with healthier relationships between men and women. He also noted that the New York feminist movement was bolstered by the three years that Studio 54 was in existence.

After the artist talk, the House of Sweden cleared the floor for a Studio 54-inspired party where visitors young and old danced to classic disco tunes.

Visitor Mat Smead said disco is just as relevant now as it ever was, if not more so. He said he and his friends still hold Studio 54-themed mixers and parties centered around the music and fashion of the era.

Monica Enqvist, press counselor at the Embassy of Sweden, said she wanted “Studio 54 Forever” to offer a window into that brief but free-spirited time.

“This exhibit will take guests as close as they could get to Studio 54,” Enqvist said.

Studio 54 was only open for 1,000 nights and Persson was there to document 100 of them. He captured the essence of the club right up to its closing party, after it was discovered that owners Steve Rubell and Ian Schrager had swiped $2.5 million from the cash registers.

“It was a magical era and I’m glad I was part of it,” said Persson. “And I’m glad you can share it with me.”

David Jahng is an editorial intern for The Washington Diplomat.