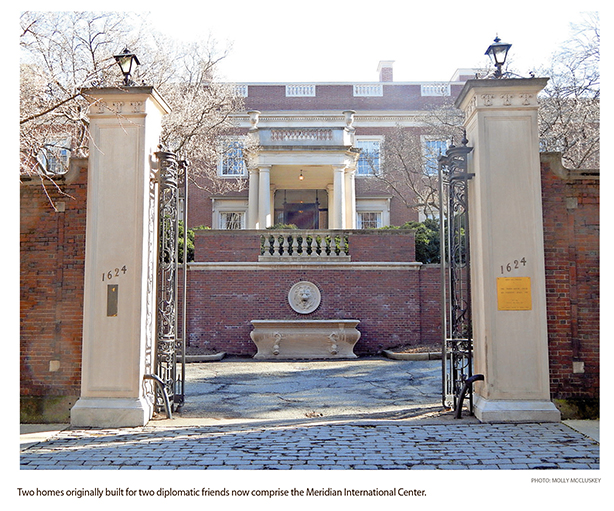 Editor’s Note: This article originally appeared in Diplomatica, a new multimedia exploration of the hidden histories of diplomatic properties in Washington, D.C., and around the world, from Molly McCluskey.

If you stand at Jefferson’s feet in the memorial built to honor him and turn your gaze north across the Tidal Basin toward the White House, you might not know it, but your gaze is following the path of one of Washington’s four prime meridians — a circle of constant longitude passing through a given place between the earth’s surface and its terrestrial poles. The well-known prime meridian, for example, is an imaginary line that runs between the North and South Poles and divides the earth into two hemispheres. In D.C., this particular meridian was used by Americans as a starting point for mapping the continent.

It’s invisible and unknown to anyone not looking for it, but for those who seek it out, the signs are there. Between the Jefferson Memorial and the glimpse of the White House visible through the trees surrounding the Tidal Basin, for example, three spots — the Jefferson Pier, the Meridian Stone and the Zero Milestone marker — all mark the way.

It’s easy to overlook this invisible line in an area so enshrouded in history that even the sidewalks have been stamped with it. Further up 16th Street, however, the line makes it presence known, in landmarks named after it: Meridian Hill Park, a number of apartment buildings and co-ops and, of course, the Meridian House, headquarters of the Meridian International Center.

It was Thomas Jefferson who erected many of those points along the meridian, beginning in 1793 when he placed a post on the grounds of what now houses the Washington Monument. In 1804, the post was replaced by a small granite marker known as the Jefferson Pier. That same year, Jefferson placed another marker on what is now 16th Street. That marker is long gone, but a plaque at Meridian Hill Park commemorates its existence.

The idea of a meridian that would not only be for Washington, but for the world, took hold during Chester A. Arthur’s administration. The 47th Congress held an international conference focused on establishing Washington’s meridian as a global standard.

Congress authorized the president to bring government delegations to Washington “for the purpose of fixing upon a meridian proper to be employed as a common zero of longitude and standard of time reckoning throughout the globe.”

The effort wouldn’t be successful, and the grand Washington meridian was officially recognized neither internationally, nor at home.

A Memorial on the Water

The site that is now the Jefferson Memorial was initially set aside in 1901 by the McMillan Commission, which called for a “round, domed, Pantheon-like structure around which were to be grouped the statues of illustrious men of the nation,” according to the National Park Service. This building was then to be surrounded by buildings containing baths, a theater, a gym and other structures.

When those plans didn’t come to fruition, an artist named Alice Pike Barney successfully led the charge to put a theater on the National Mall, anyway. Reading the original plans, one wonders what the Mall would look like today if that vision had come to pass, and if instead of massive memorials spread out along a large stretch, we instead had memorials in one large Pantheon on the Potomac. And one only has to see park police chasing sunburnt tourists out of the World War II Memorial fountain in mid-summer to know that bath houses might have remained a major draw, even in modernity.

In 1925, a design competition was launched for a memorial for Theodore Roosevelt to be housed on the Tidal Basin. The winning entry, crafted by an architect named John Russell Pope, failed to be funded by Congress and, again, the plans faltered. 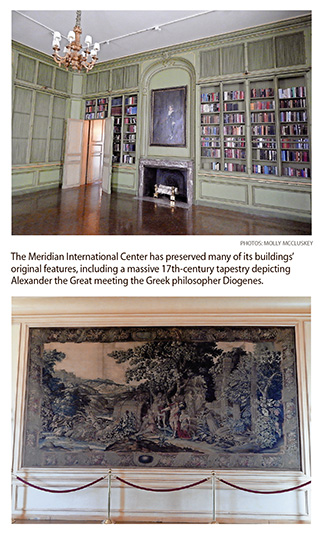 Luckily, Pope found other ways to keep himself busy.

By the time he won a competition that was a victory in name only, Pope was already well known in Washington. A prominent architect schooled in the Beaux Arts tradition, which still defines much of the historical architecture in D.C., Pope had served for five years on the Commission of Fine Arts, created to oversee the architecture and planning of Washington.

In 1915, his newly finished temple to the Scottish Rite on Meridian Hill was called the “finest building of the year” by the Architectural League, and in 1932, the American Institute of Architects named it the fifth-most beautiful building in the world.

Pope also designed the Daughters of the American Revolution (DAR) Hall, the National Archives, the West Building of the National Gallery of Art and would later design, you guessed it, the Jefferson Memorial on the Tidal Basin.

A few years after completing the Scottish Rite Temple, Pope built a home just a few blocks away for a diplomat returning to the U.S. from a stint abroad. It was so well received that the diplomat’s friend, also a returning diplomat, requested that Pope build him a home, as well. Right next door.

Pope had begun his career designing private homes, and in between designing some of the most prominent icons in the Washington landscape, Pope returned again and again to his early practice. Several of those homes now house embassies, and these two particular homes along 16th Street, across the street from Meridian Hill Park are now aptly the site of the Meridian International Center.

It’s hard to imagine a Washington where two friends could decide they want to be neighbors, buy sweeping tracts of land and have arguably the most prominent architect in the country build them an estate, but life in D.C. was different in the 1900s and such things were possible. At this time, Meridian Hill was already taking shape as a neighborhood, willed into being by Mary Henderson, the wife of a former senator who wanted to make the enclave at the intersection of 16th Street and Florida Avenue a haven for senators, ambassadors and other socially “upstanding” people. Henderson owned much of the land in the neighborhood and would often hire her favorite architect to design a house on her property, then sell it to a buyer who met her social criteria. (For a profit, of course.)

Pope designed the first of the two houses, now known as the White-Meyer House, for Henry White, who served as the ambassador to France and Italy, in 1912 for just shy of $150,000, which wouldn’t buy much in the District these days, let alone a mansion on a hill. After White’s death, the house was sold to Washington Post owner Eugene Meyer, who raised his children, including daughter Katharine Graham, there.

White’s friend, Ambassador Irwin Boyle Laughlin, who served stints in Greece, Spain, Germany, Japan, Russia and other countries, bought the neighboring land in 1912 and began building the Meridian House in 1920. Laughlin purchased a massive 17th-century tapestry depicting Alexander the Great meeting the Greek philosopher Diogenes, with the intention of hanging it in the not-yet-built dining room. Pope used the dimensions of the tapestry, still hanging today, to determine not only the scale of the dining room, but of the entire house, “in the interest of balance and symmetry.”

Purer Here the Air Whence We Overlook the City

The home stayed in the Laughlin family until 1958. It 1960, it was purchased by the newly formed Meridian International Center, a nonprofit dedicated to promoting international understanding. The center bought the adjoining property, the White-Meyer House (named after owners Henry White and Eugene Meyer), in 1987.

Today, both properties retain many of their original features. The classical symmetry of the Louis XVI style can be found throughout the Meridian House, which is punctuated by some of the original furnishings, including wrought-iron and marble-topped side tables, four Waterford crystal torcheres in the corners, blue Chinese temple jars and an antique clock and barometer on the mirrored walls.

Likewise, when the White-Meyer House underwent a major renovation in 1988 shortly after Meridian purchased it, the center worked to preserve much of the architectural detail, period hardware and the original garden filled with magnolias, witch hazels and weeping hemlocks planted by the Meyer family.

And because the properties sit on a hill, they offer stunning sunset views of Washington. In fact, on the Meridian House’s rear courtyard door is a sign that reads, “Purior hic aer: late hinc conspectus in urbem,” which translates to, “Purer here the air whence we overlook the city.” The same quotation is inscribed on a house atop Rome’s Spanish Steps.

In addition to preserving the original style of both homes, the Meridian International Center has also continued the tradition of hosting high-profile guests there. When the Whites presided over their estate, for instance, they frequently hosted social events with well-known guests such as French Prime Minister Georges Clemenceau, Senate Majority Leader Henry Cabot Lodge and President Warren G. Harding. During Meyer’s time, he welcomed John F. Kennedy and Eleanor Roosevelt, among other famous figures.

Today, high-powered guests from Congress, the administration and around the world continue to grace the halls of the Meridian for its various functions, including discussions, exhibitions and its popular annual ball (see story on page XX).

Among its other roles, Meridian serves as a welcoming and orientation center for new ambassadors arriving in Washington. It also offers a variety of public events such as weddings, including tours upon request.

“We are Washington’s home for diplomats,” said Natalie Jones, the senior vice president for external affairs at Meridian. “We are an embassy to all embassies.”

And many of those embassies can still be spotted along an invisible line that runs through Washington, through history and through the legacy of the architect who designed them.

To subscribe to Diplomatica, nominate an embassy to be profiled or sponsor an issue, contact Molly McCluskey at diplomaticadc@gmail.com.