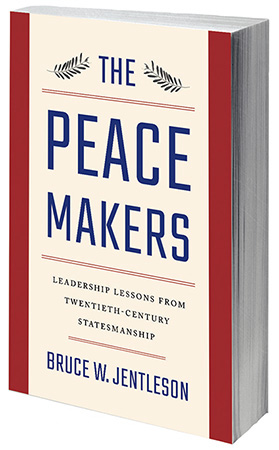 The concept of statesmanship has intrigued political thinkers since at least the time of Plato, with analysts grappling over the term’s conceptual complexity and the relatively scarce examples of this kind of elevated leadership throughout history.

“The Peacemakers: Leadership Lessons from Twentieth-Century Statesmanship” by Bruce W. Jentleson looks at statesmanship through the prism of 13 case studies from the 20th century and considers what lessons can be drawn from these examples for our current time.

Jentleson is well equipped to examine the issue. A professor of public policy and political science at Duke University, Jentleson is a leading scholar of American foreign policy, having written three books and numerous articles on the topic. He also has been a foreign policy practitioner. He was a senior advisor in the State Department’s Policy Planning Office from 2009 to 2011 and then worked on President Obama’s 2012 foreign policy campaign advisory committee. Before that, he advised Al Gore’s 2000 presidential campaign and served in the State Department during the Clinton administration.

Jentleson contemplates statesmanship from the lens of personal profiles and specific historical examples rather than precise definitions. He says his book seeks to be a global companion to “Profiles in Courage,” which was written in 1956 by then Sen. John F. Kennedy about eight American senators who displayed unusual political courage. Jentleson posits that there is a need for “global leaders who are able and willing to be transformational, to break out of narrow tunnel-vision thinking and myopic focus on today but not tomorrow.” 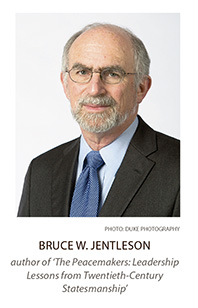 In deciding which 20th-century peacemakers to profile, he uses three criteria: They were involved in transformational statesmanship rather than transactional diplomacy, they were critical and distinctive actors who made a “big difference,” and they had a significant impact on events regardless of their formal title or position.

Jentleson draws his 20th-century leaders from the realms of major power rivalry, international institutions, the struggle for identity, advancing freedom, protecting human rights and fostering global sustainability. He examines these statesmen over a defined period, not their entire careers, and notes that they had important partners who also shaped events. He acknowledges — and laments — that his profiles are heavily Western and male-dominated, but observes this was the diplomatic reality of the last century that is likely to change in the decades ahead.

Jentleson examines each of the leaders in the context of who they were as individuals, why they made important decisions, how they pursued their goals and what they achieved. The result is an interesting array of profiles that describe compelling leaders and raise provocative questions about statesmanship.

Several of my favorites are:

Mikhail Gorbachev (1985 to 1991): The last leader of the Soviet Union, Gorbachev understood his nation’s flaws and wanted to reform communism and the Soviet Union. His agenda had three components: glasnost (political openness), perestroika (economic restructuring) and transformation to a post-Cold War world. 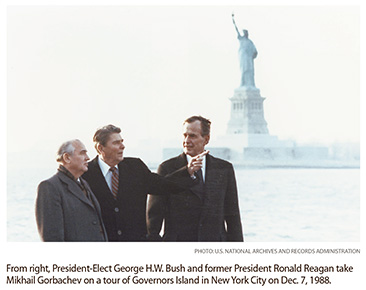 Gorbachev’s revolutionary foreign policy included curtailing the nuclear arms race with the United States, withdrawing Soviet forces from Afghanistan, relaxing the Soviet grip on Eastern Europe and developing amicable relations with America. Gorbachev’s domestic reforms were substantial, but not enough to fundamentally change his country. He was assailed by conservatives for going too far and by liberals for not going far enough.

Gorbachev’s bold experiment unraveled in 1991. A coup in August of that year by disgruntled security and intelligence officials, including members of his own government, failed but demonstrated Gorbachev’s shaky control over his country. Then a succession of Soviet republics declared their independence from Moscow and by the end of the year, the Soviet empire had disintegrated. Gorbachev’s resignation speech on Christmas Day declared that the threat of nuclear war had ended and that “work of historic significance has been accomplished.” But he lamented the demise of his nation. Jentleson gives Gorbachev much of the credit for the peaceful end of the Cold War and quotes his biographer William Taubman, who concluded that Gorbachev “almost single-handedly changed his country and the world.” 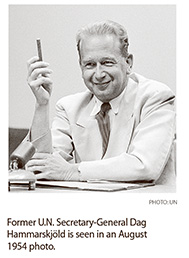 Dag Hammarskjöld (1953 to 1961): An accomplished Swedish civil servant, Hammarskjöld was selected by the U.N. Security Council in April 1953 to be the U.N.’s second secretary-general. His more than eight-year tenure was deeply consequential. He understood the secretary-general had considerable global prestige but limited formal powers. So persuasion was essential. Hammarskjold regarded the U.N. as crucial for preventing crises and managing those that occurred. When necessary, he was willing to use the secretary-general’s “right of initiative,” the discretionary authority to act without the approval of the Security Council or the General Assembly.

Jentleson examines Hammarskjöld’s diplomacy in three crises: tensions between the U.S. and China in 1953 and 1954 over American prisoners from the Korean War, the Suez Canal crisis of 1956 and the Congo crisis in 1960 and 1961.

In all, Hammarskjöld undertook more than 75 international missions during his time as secretary-general and accomplished much. “To the extent that he had charisma, it was more about capability than color, more about determination than dynamism,” Jentleson writes. “His sharp political skills were quite the surprise for those who initially saw him as a standard bureaucrat. He was self-confident enough to engage in negotiations with formidable counterparts and skilled and savvy enough to keep coming up with political formulations and legal bases for mutually agreeable diplomatic resolutions. He also had his rough edges … with a touch of arrogance, engendering some resentment. Whether in spite or of or because of such imperfections, he was a truly extraordinary secretary-general.”

Nelson Mandela (1956 to 1999): Arguably the most remarkable statesman that Jentleson chronicles is Mandela, who emerged from more than 27 years as a political prisoner to help negotiate the end of apartheid and lead the first biracial democratically elected government in South Africa. Mandela was released from prison in February 1990 and elected president four years later following an extensive negotiation with President Frederik Willem de Klerk and then a successful campaign against de Klerk for the presidency. 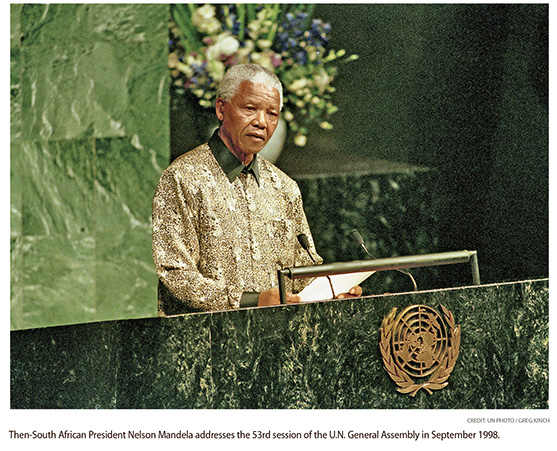 While he had a difficult personal life with two failed marriages and tension with his children, Mandela became the father of a new South Africa. He brought to his work a largeness of spirit. “I always knew that deep down in every human heart, there is mercy and generosity,” Mandela once wrote. “No one is born hating another person because of the color of their skin, or his background, or his religion. People must learn to hate, and if they can learn to hate, they can be taught to love, for love comes more naturally to the human heart than its opposite.”

His presidency was uneven in terms of administration, but he forged a societal reconciliation in South Africa that no one else could have achieved. He cared less about policy details than about national unity. From supporting the white Springboks national rugby team to establishing the Truth and Reconciliation Commission in July 1995, Mandela was able to bring South Africa together far better than anyone else could have. “His persona even more than his policies legitimized reconciliation,” Jentleson declares. 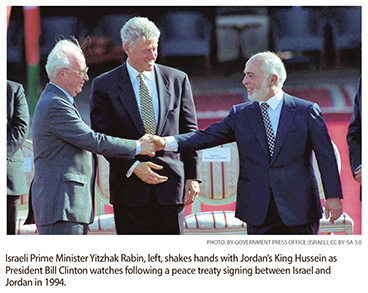 Yitzhak Rabin (1992 to 1995): Rabin was also, in Jentleson’s view, a statesman of the first order. A respected Israeli military leader, ambassador to the United States and defense minister, Rabin launched a bold peace initiative in 1992 during his second stint as prime minister. A member of his country’s founding generation, Rabin was the first prime minister born in Israel and was viewed as “Mr. Security.” He believed that peace would not guarantee Israel’s security, but Israel could never be secure without peace. His motto blended idealism and pragmatism: “I will fight terror as if there were no peace talks and I will pursue peace as if there were no terror.”

Rabin’s handshake with Yasser Arafat in September 1992 on the White House lawn was a signature moment of peacemaking, as was his poignant speech with the plaintive plea, “Enough of blood and tears. Enough.” Rabin and Arafat signed a follow-on agreement in September 1995, but Rabin was assassinated about a month later. Jentleson believes that had Rabin lived, there may have been a broad Middle East peace agreement.

Peter Benenson (1961 to 1967): The founder of Amnesty International in 1961, Benenson was a British lawyer who helped launch the human rights movement with his advocacy for “prisoners of conscience” and his powerful essay “The Forgotten Prisoners.” Jentleson says that Amnesty International went through three distinct phases: its launch and consolidation from 1961 to 1970; its rise to prominence in the 1970s and 1980s; and then its receding as other human rights groups assumed ascendancy in the 1990s.

He argues that Benenson was a visionary who suffered from founder’s syndrome, in which the qualities that were needed to launch the venture did not carry over to the next stages of organizational development. He argues that after the Rwanda genocide in 1994, other groups took the lead role in the human rights movement such as Human Rights Watch, Doctors Without Borders, International Rescue Committee and the Open Society Institute. Nonetheless, he argues that Benenson was a pioneer and a man of historical consequence.

Gro Harlem Brundtland (1987 to 2003): The three-time Norwegian prime minister achieved global prominence with her chairmanship of the World Commission on Environment and Development, culminating in the group’s 1987 report “Our Common Future.” Brundtland skillfully led lengthy deliberations of the panel over four years, with its meetings lasting between six and 12 days and including representatives from nongovernmental organizations and civil society. She crafted a report that was organized around a coherent and enduring concept: sustainable development.

“Our Common Future” became the most widely read U.N. report in history, with a Google hit count of nearly 100 million. The report’s organizing theme was simple and even elegant: “meeting the needs and aspirations of the present generation without compromising the ability of future generations to meet their own needs.” She later served successfully as the head of the World Health Organization.

“The Peacemakers” is a strong, compelling and valuable book. The profiles are clear and readable and the stories of successful diplomacy are inspiring. Jentleson reminds us that high-level leadership is not only possible but has occurred relatively recently. His focus on determined and successful leaders underscores the notion that people can drive, or at least shape, history. This is a healthy corrective to some academic literature that places almost exclusive emphasis on what Jentleson calls “systemic forces and such timeless dynamics as national interest and balance of power.”

The book raises many questions, some directly, others by implication and others by inadvertence. For example, he describes Microsoft founder Bill Gates as a philanthropic statesman and chronicles his hugely consequential work. Here, I found this use of the term “statesman” confusing. Gates, to be sure, is a very influential person and his foundation is a global power. But I’m not sure his leadership constitutes statesmanship.

I wish Jentleson had defined statesmanship more precisely beyond being “transformative.” As I see it, statesmanship involves at least four qualities: a focus on the long term, a willingness to take personal or political risks, compassion and effectiveness. This seems to mirror Jentleson’s thinking, but he never says so explicitly. This raises a broader point: Is there any difference between strong and purposeful leadership and statesmanship? Are all strong leaders statesmen? If not, why not? These are questions that Jentleson might wish to grapple with in future writings on this important topic.