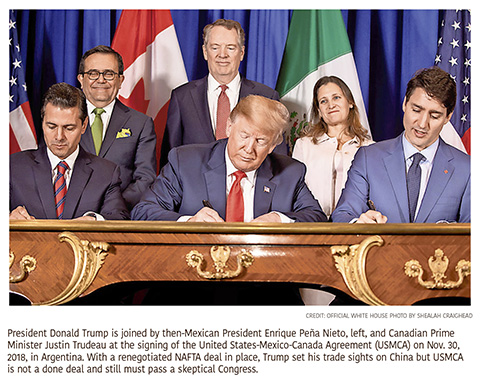 China has become the frontline in President Trump’s trade wars, as the world anxiously watches to see whether the two superpowers will resolve their differences or upend the global economy.

Meanwhile, another major trade deal in Asia, the Trans-Pacific Partnership (TPP), has long since faded from the headlines after Trump withdrew from the sweeping trade agreement in January 2017. But the deal is far from dead.

Trump’s exit may have formally killed TPP, but it’s been reincarnated as the Comprehensive and Progressive Agreement for Trans-Pacific Partnership (CPTPP), which is made up of the 11 remaining countries: Australia, Brunei, Canada, Chile, Japan, Malaysia, Mexico, New Zealand, Peru, Singapore and Vietnam.

The Obama administration saw TPP as a cornerstone of its strategic pivot toward the rapidly growing Asia-Pacific region. China was noticeably from TPP — nor is it part of CPTPP — because one of the underlying motives behind both trade agreements is to keep Chinese dominance in check by creating a new economic bloc.

The original TPP trading bloc would have been formidable, encompassing 12 Pacific-Rim nations that together accounted for about 40 percent of global economic output and a third of world trade. With the U.S. out of the picture, CPTPP has been criticized as lacking strength.

Yet the resurrected agreement still wields significant clout, representing 495 million consumers and 13.5 percent of global GDP. CPTPP has also been quietly working to fulfill part of its original mandate — providing a counterweight to Chinese hegemony in the region.

Many economists say that by withdrawing from TPP, Trump lost a key source of leverage in his fight to curb unfair Chinese trading practices. TPP, which took over a decade to negotiate and struck down thousands of tariffs, included unprecedented environmental, labor and intellectual property protections. In doing so, it addressed many of Trump’s chief complaints against China such as state subsidies and IP theft. Most important, it would’ve served as a model to establish rules of the road for Asian businesses that meet American, not Chinese, standards.

Ironically, Trump used those high standards as a blueprint for updating NAFTA.

Like TPP, the battle over NAFTA faded from the headlines once Trump declared victory last November with the signing of NAFTA’s replacement, the United States-Mexico-Canada Agreement (USMCA). But it’s not a done deal. Congress still has to approve USMCA, a high hurdle given Democratic opposition to the agreement and the short window for passage before the 2020 presidential race goes into full gear.

The Washington Diplomat asked former U.S. Trade Representative Michael Froman, one of the architects of TPP and currently a fellow at the Council on Foreign Relations and vice chairman and president of strategic growth at Mastercard, about his thoughts on TPP, plus his take on NAFTA’s successor, which borrows from the Asia-Pacific trade deal he helped craft. 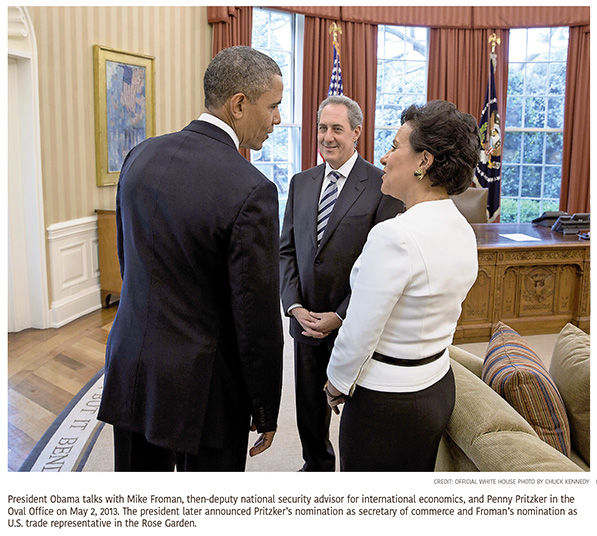 The Washington Diplomat: Tell us about your role in negotiating TPP.

Michael Froman: Negotiations toward a TPP started before I was U.S. trade representative, but I think it’s fair to say that when I took on that position, it became a major focus of my efforts. The TPP had been launched by four Asia-Pacific countries, but once the United States joined, the U.S. took a leading role.

These types of agreements are extraordinarily complex and difficult to negotiate. You not only need to develop and advocate for your country’s perspective on the issues, but you need to understand the politics of the issues in every one of the other countries around the table. At one point, my staff calculated that there were approximately 1,000 critical issues outstanding in the negotiations, and we just worked, month by month, to resolve all of them to ensure the American people got the best deal possible.

In the end, we reached an agreement that significantly improved international rules of trade and opened markets and did so among developed and developing countries, rich and poor, large and small — all contributing to the definition of a high-standard agreement.

TWD: Trump pulled the U.S. out of TPP. If you had the chance to influence him, what would you have said to him to try to convince him to keep the U.S. in the agreement? 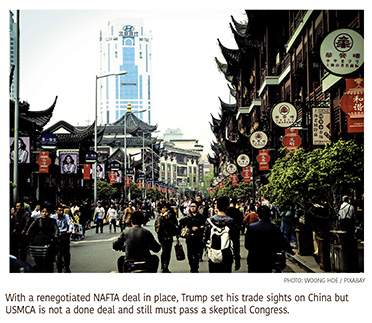 MF: In my view, it is quite possible that the decision to withdraw from TPP may well be seen as one of the most significant strategic blunders in recent American history. My argument to the Trump administration would have been that, whatever one thinks of any individual provisions — and every administration seeks to negotiate better outcomes than their predecessors — TPP itself was strategically important in terms of cementing the role of the United States as a Pacific power.

Every country in the region needs to have a positive and constructive relationship with China, historically the largest regional power, but our allies and partners there very much want the U.S. to be engaged, to lead as well. TPP was one of the key ways of doing so, and our decision to pull out created a void that China was fully prepared to fill through the Belt and Road Initiative, the Regional Comprehensive Economic Partnership and other aspects of its regional strategy.

TWD: TPP has rebranded itself as CPTPP, but some say it has no “bite” without the U.S. How effective do you think the new agreement can be?

MF: I think it is important that the vast majority of the rules negotiated in TPP are being implemented by the remaining 11 countries and that additional countries are seeking to join the agreement. That means that the high standards we helped formulate will see themselves integrated into the global trading system.

One of the important aspects of TPP was that all of the major obligations, including on labor and environmental issues, were fully enforceable. The U.S. tends to be the country most committed to enforcing those obligations, but I am hopeful that other TPP countries will take up the responsibility to do so in our absence.

TWD: TPP was part of Obama’s “pivot to Asia” and a way to counterbalance China’s rising economic power. What does the U.S. no longer being part of TPP mean for U.S. interests in the Asia-Pacific region, economically and politically?

MF: TPP was never directed against China per se, but it was intended to raise the standards in the region in such a way that China would have to raise its game as well.

The Asia-Pacific region is perhaps the most important region in the world. It is home to the bulk of the world’s population and most of the fastest-growing economies. We are a Pacific power and have a strong interest in how that region evolves. TPP was a key component of an overall strategy that recognized the importance of the region. With our withdrawal, the need remains for a converted and comprehensive regional strategy to further our economic, political and security interests.

TWD: Shifting to another key trade deal, Trump has renegotiated NAFTA into USMCA. What do you think of the new agreement in terms of U.S. interests?

MF: NAFTA dates back to the early 1990s and was certainly in need of updating. President Obama called for the renegotiation of NAFTA, and we did that through TPP, as Canada and Mexico were members of TPP.

It is comforting to see that the renegotiated NAFTA builds significantly on the foundation laid by TPP, although of course the Trump administration has put its own stamp on it. Without getting into specifics, I think some of the changes are positive, some are negative and some remain to be seen. But I think the fundamental need to update NAFTA is one that has been articulated for some time, and the USMCA certainly reflects that.

TWD: The Democrats insisted that labor law enforcement be part of USMCA, and Trump has to play nice with them to get USMCA to pass. How do you think this will play out? Will USMCA pass?

MF: This is a very dynamic issue, so it is hard to predict, particularly at this point in the political cycle. Trade agreements are always difficult to get through Congress, even under the best of circumstances. With the start of the 2020 presidential campaign, this is even more complicated. 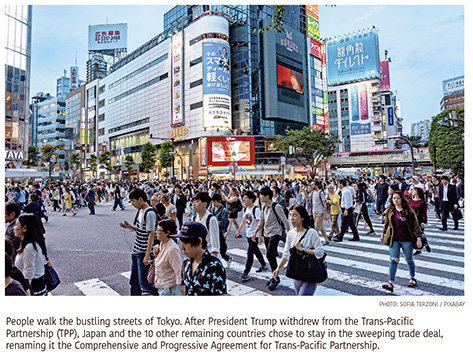 One question is whether House Speaker [Nancy] Pelosi will spend political capital to push a trade agreement that a majority of her caucus is likely to oppose (though perhaps a smaller majority than has been the case on other agreements) in order to deliver a win for President Trump. And, if she is willing to do so, what the price of her support will be. Will she insist on changes to the agreement or supplemental agreements on the enforcement of labor and environmental rights? Will she press for increased infrastructure spending or a domestic policy package to help American workers prepare for and succeed in a rapidly changing economy (whether that change comes from trade or, more likely, technology)? Right now, it’s unclear, but she certainly sounds like she wants to cooperate with the administration to get this done.

The Trump administration has had a separate issue with some Republicans and moderate Democrats concerned about its use of tariffs on steel and aluminum and its threatened use of tariffs on imported autos. There has been some progress, but there’s a lot of work to do to get between where we are and a signing ceremony. I know [U.S. Trade Representative Robert] Lighthizer is working hard on that right now.

TWD: Trump favors bilateral trade deals over multiparty agreements. What’s your opinion on bilateral versus multiparty trade agreements in general? Specifically, what are your thoughts on Trump looking to set bilats with Japan, China and the U.K.? Will such deals be effective?

MF: There is nothing inherently wrong with a bilateral agreement, and there might be circumstances in which it would be appropriate, but it would be a mistake to assume that a series of bilateral agreements is easier to negotiate than a multiparty agreement. Ultimately, you want a consistent set of rules to be adopted across multiple markets. That’s important, particularly for small- and medium-sized businesses who find the complexity of navigating a web of different trade rules bewildering.

By the way, this is not just an issue for governments. There is an increasingly important role for the private sector, particularly in the context of governments turning inward, to address frictions in the global trading system. For example, Mastercard and others are developing innovative solutions to help facilitate trade and ensure that small- and medium-sized businesses can fully participate in and benefit from the global economy.

When the WTO reached a Trade Facilitation Agreement in 2013, there were estimates that eliminating frictions at the borders could add up to $1 trillion to the global economy. There’s a lot that can be done by the private sector to be a partner and problem solver in addressing these challenges. Trade is just too important to leave to trade ministers.