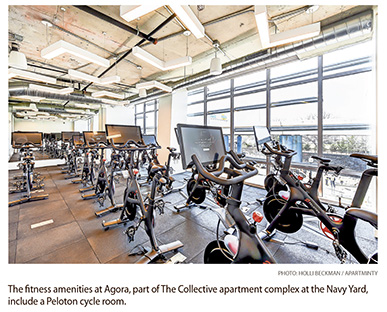 With almost 16,000 residential units under construction in the nation’s capital as of August 2017, according to the Washington DC Economic Partnership’s 2017-18 DC Development Report, developers are looking to flex their competitive muscles. For many, that means offering fitness facilities that go above and beyond the traditionally cramped room stocked with a treadmill and a few weights.

Condos, particularly new construction, are touting onsite gyms with top-of-the-line equipment such as Peloton bikes, yoga and spin studios, lap pools and group exercise classes to attract well-heeled residents with high expectations. What’s more, gone are the days of relegating exercise areas to a building’s basement. These amenities are front and center, with plenty of windows offering natural light and great views of the city.

Several factors are driving this trend. For one, the nation’s capital ranks high — even claiming the top spot several times — on the American College of Sports Medicine’s list of the fittest U.S. cities. At the same time, the area’s population has grown to more than 680,000, according to 2016 Census Bureau estimates — the highest in 40 years. For the real estate market, these two characteristics have led to a healthy infusion of development and competition.

“D.C. in general has more people moving into it than out than anywhere in the country,” said Samer Kuraishi, president of One Real Estate in D.C. and a premier agent at Zillow, an online marketplace. “We have great schools, the government’s here and the job market is strong. Consumer confidence is super high.”

Additionally, rental properties tend to offer more amenities, including pumped-up fitness facilities, so when many rentals went condo in recent years, they were already outfitted for such spaces, said Clint Mann, president of Urban Pace, a Long & Foster company that provides marketing, sale and advisory services to real estate developers specializing in condominium and multifamily developments.

“Ten, 12 years ago, you saw this huge conversion of rental products into condominium products in the height of the market, when the D.C. market was on fire,” Mann said. “They were already programmed with apartment-style amenities,” such as movie rooms, fitness rooms and even golf simulators.

As a result, new construction has had to keep up.

Still, not all condo buyers are looking for onsite fitness facilities — or more specifically, the higher condo fees that accompany them. Instead, buyers want to invest in unit finishings, products and services, such as a front desk and onsite property management.

“Most condo buildings now are under 100 units,” Mann said. “Conversely, apartment buildings are much larger. You see those 200, 300, 400 residences, and when you have that number of units to share in the cost, the cost per door goes down dramatically and the need for a larger facility goes up.” 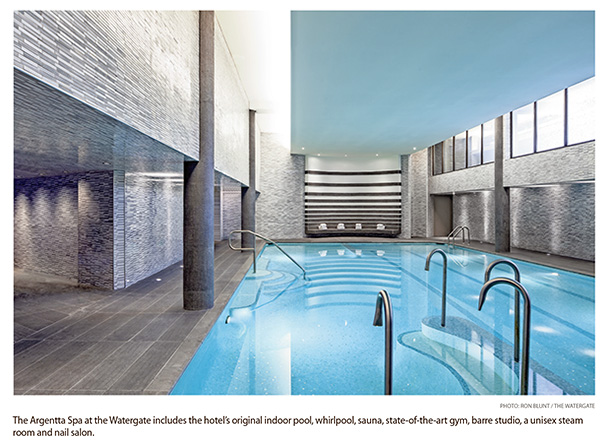 One way that developers are addressing the divide is by building large apartment buildings with top-notch amenities near smaller condo properties and selling memberships to owners who want to use the facilities at the former. An example is Atlantic Plumbing in Shaw, which has two buildings situated across the street from each other. One is a 300-plus-unit rental apartment property and the other a 62-unit condo property. The smaller one has a small fitness facility on the roof with treadmills, a set of free weights and some bikes, while the apartment building offers a fitness center with spin and yoga studios and a rooftop pool.

Additionally, many condo buyers are content with the gym memberships they already have. “For our new-construction condominium buyers that are paying a premium to live there and best-in-class new construction product in the city, they generally have a membership to a fitness facility, and they’re not usually willing to give that up,” Mann said.

One exception is that if you’re in a condo in an emerging area with no gym nearby, you might invest more in that feature. Also consider your demographic, Mann added. “The empty nester, I think, is interested in a larger fitness facility and more willing to give up their gym memberships, but the younger buyers — the millennials — are still more focused on having an outside membership,” he said

Mei-Mei Venners, director of sales for the Westlight, a luxury condo building that opened in October 2017, says that workout space is “an extension of the level of service that we give” as part of condo fees that range from about $650 to more than $3,000 for the units, which sell for $1 million to $4.5 million.

“There are gym rats that are not going to give up their Equinox and their fitness club because they like the classes,” Venners said. “But if you’re looking for your serious workout and you’re a gym buff, you’re going to work out where you can walk downstairs after work or before work and you get your full workout in.”

She sees two extremes in the D.C. condo market. “You can be a building that offers nothing — no services and no amenities — or you can go five star … and you can offer everything,” Venners said. 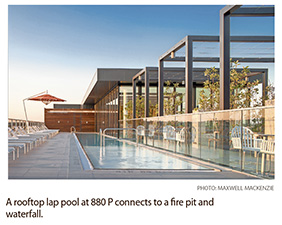 We take a look at the latter.

This is a two-block mixed-use project that’s taking advantage of giving condo owners access to the rental building’s amenities. These include an almost 7,000-square-foot health club with yoga, aerobics and cycling studios, cardio machines, free weights, kettlebells and TRX straps for body-weight exercises.

“I think a small college football team would be envious,” said Richard Lake, a founding partner of Roadside Development, which developed City Market at O.

Additionally, cycling, yoga, tai chi and other classes are offered at least once a day for free. (Really, the costs are built into leases and condo owners’ membership fees.)

There’s also a lap pool on the roof that ties to another building with sunken fire pits and fireplaces, which connects to a third building that has a 16-foot-by-30-foot waterfall that people can sit under.

“It really is geared to those who really focus on fitness,” Lake said. “You have no excuse not to work out.”

That’s intentional, he added. “When we first designed the project, this was before Shaw really took off and there really wasn’t any kind of fitness offerings to the public in this entire submarket,” Lake said. “You had to go all the way over to 14th and U Streets to find the closest gym. We thought it was really important to make that an offering. In addition, we liked the idea to really gear the community toward health.”

And residents are taking advantage of it. “Our spin classes are always full,” Lake said. “It’s a very active community.”

For anyone who needs some R&R, though, a massage therapist is at the ready should residents want to schedule a treatment in the onsite massage therapy room. 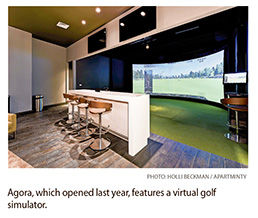 Agora, which opened this year, is part of three properties at The Collective, an apartment complex at the Navy Yard. Its amenities include a virtual golf simulator, Peloton cycle room, fitness room, stretch room, spa rooms and two private massage rooms with hydro massage beds. It also boasts a rooftop infinity pool and a dog park so Fido and Fifi can stay in shape, too.

National Harbor will have its first condos when this property opens in the summer. Amenities will include a resort-style pool with a sunning patio and private cabanas, year-round lawn games and a fitness center with a yoga studio that opens to the courtyard. 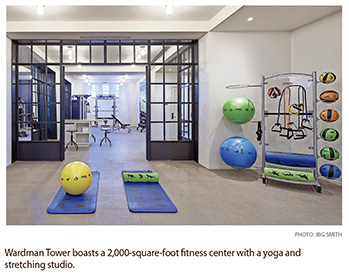 Aktiv, the property’s fitness and wellness center, has a yoga studio in addition to standard gym equipment. There’s also Club Blu atop the West Tower, which has a rooftop pool where residents can get in some laps before toweling off to sights of the Washington Monument and Potomac River.

Once home to Presidents Dwight D. Eisenhower, Lyndon B. Johnson and Herbert Hoover and actress Marlene Dietrich, this property was built in 1928 and joined the National Register of Historic Places in 1984. A two-year renovation that was completed in 2017 by JBG Smith, and North America Sekisui House added a 2,000-square-foot fitness center with a yoga and stretching studio to the Woodley Park building.

Live — and sweat — among history at this iconic building. OK, so it was Richard Nixon who made history at the hotel part of it, but you still have plenty of famous neighbors among the 600 modern-day condo units here. Amenities include a pool and fitness center. It was developed in the late 1960s by an Italian firm to be the first mixed-use property in the District, according to LifeattheTop.com. 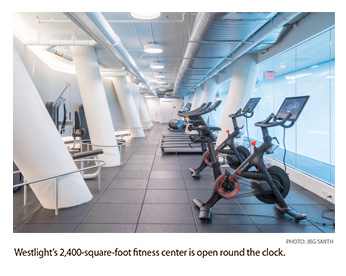 The fitness center here is open round the clock. Its 2,400 square feet is home to Technogym equipment manufactured in Italy. Machines include an overhead press, a core machine, two stationary bikes, three treadmills, three ellipticals, a medicine ball rack and a dumbbell rack with weights up to 50 pounds. There are also two Peloton bikes with unlimited complimentary online streaming classes.

The space has a view of the mezzanine walkway with floor-to-ceiling windows and lots of natural light. A rubberized floor helps maximize exercisers’ performance and safety while also protecting equipment from damage.

Lastly, the property has a 25-meter, heated rooftop lap pool. It opened May 1 and will close in October.