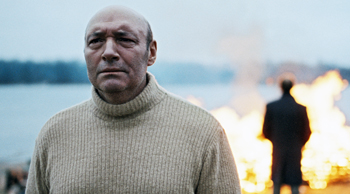 Yuriy Tsurilo plays Miron, a paper mill owner who travels thousands of miles to help his best friend cremate his wife’s remains on the banks of the Volga River, at the site of their honeymoon, in “Silent Souls.”

For audiences watching Russian director Aleksei Fedorchenko’s third feature, “Silent Souls,” they get pretty much what might be expected from the title. There’s very little dialogue, and not a whole lot happens, plot-wise, in screenwriter Denis Osokin’s adaptation of the minimalist script from Aist Sergeyev’s novel, “The Buntings.” The extremely slow pace is not that far from watching paint dry, as a skeptic might remark.

Yet the bright painting-like images filling the CinemaScope frames are stunningly jaw-dropping, earning director of photography Mikhail Krichman the Best Cinematography award at the Venice Film Festival. The mesmerizing pictures produce a gentle rhythm reminiscent of — yet distinctive from — the soothing sensation of films by esteemed Russian auteur Andrei Tarkovsky, who casts his long shadow over all of Russian cinema.

As “Silent Souls” opens, Aist (Igor Sergeyev) cycles a bike through the woods with two buntings — tiny birds — locked in a cage behind him. When he’s not embracing his passion as a photographer and writer, Aist works in a paper mill owned by Miron (Yuriy Tsurilo), his best friend. When Miron’s dear wife Tanya (Yuliya Aug) passes away, he asks Aist to join him in conducting the funeral rites of their descendents, the Merjan, a Finno-Ugric tribe based in western central Russia’s Kostroma Oblast region around Lake Nero. In the 1600s, the Merjan were assimilated into the predominant Russian culture, but they retain and practice some ancient customs today.

The pair embark on an epic road rip over thousands of miles to cremate Tanya’s remains on the bank of the Volga River, at the site of their honeymoon. The buntings come along for the ride, providing a musical soundtrack to the journey. As Miron recalls personal, intimate moments with Tanya, he comes to the realization that Aist was in love with Tanya as well. Miron concedes that she should have married Aist instead. This confession doesn’t faze Aist, whose thoughts linger on memories of him and his father rowing on the water and performing rituals together.

The juxtaposition of these sequences evoke the Merjan concept of the paired gods of love and water. Other Merjan practices depicted include bathing in vodka and tying colorful threads to the pubic hair of a bride, a process that is more fascinating to view than one might initially think. Throughout the trip, Aist serves as a tour guide for the audience, explaining what is happening on screen via voiceovers full of words of wisdom. 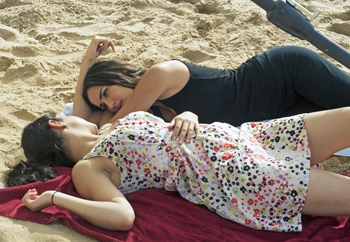 Nikohl Boosheri as Atafeh, left, and Sarah Kazemy as Shireen discover friendship and forbidden love in Iran’s underground in “Circumstance.”

Iranian-American writer-director Maryam Keshavarz, who has resided in Iran as well as the United States, helms the gripping “Circumstance,” which captured the Audience Award at the 2011 Sundance Film Festival. Her deft story is driven by parallel threads that weave together elegantly as the film closes — and not exactly in that saccharine, Hollywood happy ending kind of way, either. Shooting in Beirut, Lebanon, her assured direction draws compelling performances from the talented ensemble cast. There are some weaker characters and plot elements, but the overall result is pretty impressive for a feature debut.

From a personal perspective, “Circumstance” acts as a coming-of-age story of two young teenage girls who find their place in the world. Best pals forever since they were small children, the friendship between Shireen (Sarah Kazemy) and Atafeh (Nikohl Boosheri) has developed into a budding love affair. As young people often do when they don’t fit within societal norms, they rebel, but not so openly and boldly by Western standards — this being Iran. Shireen and Atafeh dream of escaping to freedom in Dubai. In the meantime, their video work consists of helping to dub Gus Van Sant’s “Milk” into Farsi, a production including humorous instructions from the director to act more gay at times — and less gay at others.

An orphan who lives with her uncle, Shireen is haunted by the memory of her activist parents, whose anti-government literature led them to die as political dissidents in prison. Atafeh has led a much more privileged life, with a surgeon mother, Azar (Nasrin Pakkho), and an affluent father, Firouz (Soheil Parsa), whose time at Berkeley only fueled his natural secular and liberal leanings. Yet he advises his daughter that she must accept the limits placed upon their freedom by the fundamentalist mullahs leading the government.

That’s certainly the road now taken by Atafeh’s brother Mehran, in a convincing transformation played by Reza Sixo Safai. As an ex-drug addict who successfully completed rehab, he has converted into an ultra-conservative religious fanatic who prays five times a day, which he believes has cleansed him of his sins. On the other hand, he believes Atafeh is badly soiled by her persistent liberties. His solution to break up his sister’s lesbian relationship: marry Shireen. 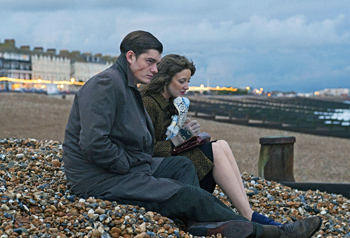 Pinkie (Sam Riley) is an up-and-coming gangster in 1960s Britain who seduces naïve Rose (Andrea Riseborough) to keep her from going to the police in “Brighton Rock.”

With the film noirish “Brighton Rock,” British writer Rowan Joffe turns up the melodrama in a notable directorial debut. Joffe views his first feature behind the helm as a new adaptation of Graham Greene’s 1938 novel of the same name, rather than a remake of the Boulting brothers’ 1947 version, a classical British gangster flick. Joffe updates the setting to 1964, a heyday for the great British gangster, as he translates Greene’s story of a young razor-wielding sociopath who marries a waitress to silence her. Joffe’s script and characters work well enough, even if they are not fully successful. Still, the end product looks fabulous, with appropriately gloomy cinematography fueled by Martin Phipps’s compellingly violent score.

Teenager Rose (Andrea Riseborough of “Made in Dagenham,” “Never Let Me Go”) works as a waitress in the Snow Coffee Shop owned by Ida (Helen Mirren) in Brighton. One day, Rose comes across evidence associating the ambitious young mobster Pinkie Brown (Sam Riley of “Control”) to a revenge killing. To figure out what she knows, Pinkie chats her up. Then, to keep her quiet, he makes her fall in love with him. Naïve Rose, a plain Jane with glasses, is easily smitten, having never seen the likes of the roguishly handsome thug.

Meanwhile, Pinkie can’t decide whether he can rely on Rose or if he should silence her for good before she ever has a chance to spill the beans to the coppers, as epitomized by a stunning scene at the White Cliffs of Dover. He’s seemingly indecisive about throwing her over the edge versus kissing her. Opting for the latter, he marries her, with full awareness that as his wife, Rose cannot testify against her husband. However, Ida relentlessly pursues Pinkie, in part to protect Rose from the deeply disturbed boy she has married.

The fall 2011 season of Harlan Jacobson’s “Talk Cinema” kicks off Sept. 25. Each Sunday at 10 a.m. offers a sneak preview and discussion of major specialty films, often with notable guest speakers.

The program “Divided Germany – Fifty Years Construction of the Berlin Wall” (Sept. 28-Oct. 28) includes films, discussions and exhibition about the Berlin Wall’s historic separation of West Berlin not only from East Berlin, but also from East Germany, which borders around the entire city.

The Global Film Initiative’s Global Lens program seeks to raise cross-cultural understanding by showcasing films from around the world. In Sidharth Srinivasan’s thriller “Soul of Sand” (Sun., Sept. 11, 2.p.m.), the night watchman of an abandoned Delhi mine and his wife become embroiled in their boss’s nefarious schemes, a greed symbolizing the clash between India’s booming economy and its traditional spirituality. Aktan Arym Kubat’s “The Light Thief” (Fri., Sept. 16, 7 p.m.) presents a tale of impoverished Kyrgyzstan, in which a modest electrician makes a Faustian bargain with a big-shot property developer to deliver wind-generated power to his struggling community.


“A Polish Quartet: Jerzy Skolimowski in the 1960s” looks back at the work of the prominent Polish auteur, a graduate of the famed Łódź Film School. Skolimowski started out co-writing scripts for two seminal films, Andrzej Wajda’s “Innocent Sorcerers” and Roman Polanski’s “Knife in the Water,” before completing four cheaply made, indie productions that looked at the angst of youth in a semiautobiographical manner with Skolimowski’s trademark flair.

“This Other Eden: Ireland and Film” (Aug. 27-Sept. 25) completes its retrospective of Irish films, in collaboration with the Irish Film Institute, Dublin.