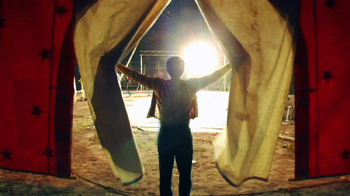 Also See: ‘Le Quattro Volte’ and ‘The Princess of Montpensier’ and Repertory Notes

American filmmaker Aaron Schock’s “Circo” follows a Mexican family struggling to keep the lights from going out on the circus they’ve owned since the late 19th century.

American filmmaker Aaron Schock’s “Circo” returns to D.C. for a deserved theatrical release after its East Coast premiere during the 2010 AFI-Discovery Channel SilverDocs Festival. Schock wanted to make a documentary about Mexican culture that didn’t focus on the oft-told tale of immigration to the United States. Yet he ended up with subjects who are themselves everlasting migrants.

While he was doing field research in a Mexican village in the state of Nayarit, the traveling circus came to town. Over a span of 21 months, Shock traveled to rural Mexico eight times to follow and shoot the Gran Circo Mexico, owned by the same family since the late 19th century. “Circo” results from what was largely a one-man show by Schock, who produced, directed, operated the camera, and recorded the sound for the entire film.

Fittingly, his subjects are busy multitasking themselves, led by ringmaster Tino Ponce. The five adults and five children in the circus are kinetic actors, perpetually in motion. They arrive in a town to unload the truck, set up the circus, perform, break down, load the truck, and move on to the next gig after only one or two days. It’s a life fraught with economic and physical hardships. Tino though is driven by his desire to meet and surpass the standards of Gilberto, his overbearing father. Basically illiterate, Tino knows no other livelihood, having begun performing in the circus at the age of 6. As he puts it, “Circus forever…”

In contrast, his wife Ivonne married into this life, having run away with the circus — and Tino — when she was 15. Coming from a background of “settled” people living in a town, she is still considered an outsider by Gilberto and his wife, Lupe. To some degree, they’re right. She’s not satisfied with her existence. Watching the children spend all their time in rehearsals, with no time for school, she laments, “They give us too much.”

Though the children seem happy, they are amazed that other kids their age only attend school and play. The mother worries about her children’s future without an education, knowing that the Ponces’ traditional itinerant lifestyle may not last forever in the 21st century. But Schock doesn’t delve too deeply into the dark tensions. Instead, he focuses on celebrating the joy of the circus while it lasts.Opens Fri., May 6 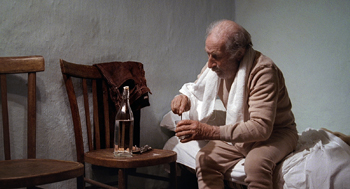 Giuseppe Fuda is an elderly goat herder living out his last days in the Italian mountainside in Michelangelo Frammartino’s poetic “Le Quattro Volte.”

“Le Quattro Volte,” a rapturous quasi-documentary from Italian filmmaker Michelangelo Frammartino, is unlike anything you’ve watched before, unless you saw it at an international film festival in New York, Telluride, Toronto, Cannes or Tokyo. Nearly wordless, the cinematic poem deftly captures the rhythms of everyday life in an Italian mountain village, capturing moments of life full of drama, comedy and connectivity. You could say it’s like minimalist French auteur Jacques Tati in the country.

Each scene is shot like a carefully composed painting, with seemingly minor details emerging into prominence with continued viewing. Without dialogue, the sounds of humans, dogs, goats, plants and rocks take on added heft. Credit goes to the assured pacing derived from Frammartino’s direction and Benni Atria and Maurizio Grillo’s editing. They enable the film to transcend beyond a mere academic exercise into a realm approaching spirituality.

The title “Le Quattro Volte” references the Pythagorean concept of four-fold transmigration of souls, which migrate from human to animal to vegetable to mineral. Two-and-a-half millennia ago, in the mountains of beautiful Calabria at the southernmost point of Italy, the Greek philosopher Pythagoras invented mathematics and — legend has it — talked to the animals. Today, not much has changed.

Emerging from the smoke of a charcoal kiln, an elderly goat herder (Giuseppe Fuda) appears to be staying put to live his final days in the pastoral setting where he was born. Aided by a loyal dog, he continues to tend to his goats even though most of his fellow villagers have abandoned ship for greener pastures. He imbibes what he believes to be medicine, comprised of dust from the floor of the church, but he misses a dose one night and passes away. In the film’s most ambitious and memorable scene, Frammartino stages a 10-minute sequence in which the dog steals the show.

The audience sees the miracle of birth of a baby goat who eagerly enters life and chases after his mother. Separated from her, the kid seeks cover under a towering fir tree, shaken by the mountain winds. The tree lives through the snowy winter, emerging into the spring only to be cut down in a pagan-like village ritual in which its bark is stripped. The tree’s cut-up carcass then undergoes metamorphosis into charcoal via a timeless, traditional Calabrian process. As the fire in the charcoal kiln burns, smoke arises from the hut, closing the cycle. Ashes to ashes, dust to dust. 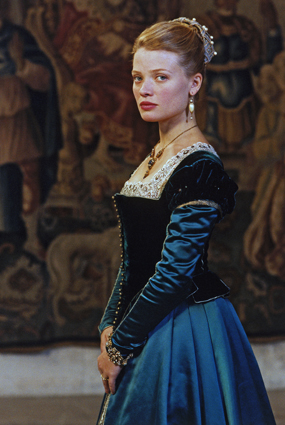 Mélanie Thierry earns the adoration of four Frenchmen in Bertrand Tavernier’s “The Princess of Montpensier.”

Versatile French writer-director Bertrand Tavernier (“Beatrice,” “Captain Conan,” “Round Midnight,”) is at the top of his game with “The Princess of Montpensier,” a skillful adaptation of Madame de La Fayette’s 1662 novel. Opening in France 100 years earlier, the epic costume drama unfolds against the chaotic background of the Wars of Religions that pitted Catholics versus Huguenots and upended society.

Veteran Tavernier’s sweeping direction enables the creation of a vivid mise-en-scène. Driven by Philippe Sarde’s throbbing score with elements of modern percussion, director of photography Bruno de Keyzer’s dazzling widescreen camerawork handily captures the horrors of war. In a startling scene near the film’s opening, Huguenot crusader Count of Chabannes (Lambert Wilson) questions his faith after a fight in a barn results in a sword being driven through a pregnant woman’s belly. But “The Princess of Montpensier” is not just a war movie; it’s also a classic tale of star-crossed lovers.

Heiress Marie de Mézieres (Mélanie Thierry), a Bardot-like beauty, is in love with fearless warrior Henri de Guise (Gaspard Ulliel). But under threat of banishment to a convent, she reluctantly submits to the will of her father, the Marquis of Mézières (Philippe Magnan), who has other plans for her. He’s made a political arrangement with the Duke of Montpensier to marry her to his painfully shy son, the Prince of Montpensier (Grégoire Leprince-Ringuet). Underscoring Marie’s 16th-century status as mere property to be transferred between men, the bargain is sealed after the duke adds choice land to sweeten the pot.

Shortly after the marriage, Marie’s husband takes her for safekeeping to an isolated castle before departing for war. He leaves her in the care of Chabannes, his wise former tutor now retired from war, who falls in love with her as well. Add the Duke of Anjou (Raphaël Personnaz) — a future king — to the list of men who desire her. Torn among four powerful figures who want her, Marie still clings to her true love for de Guise.

The ensemble cast is full of strong players, including Judith Chemla as the Duke of Anjou’s mother, the queen. In the most notable performance, Wilson exudes tremendously quiet inner strength as Chabannes. Thierry is actually the weakest actor of the bunch, not expressing a whole lot beyond her pouty good looks, though that may be in part due to her character’s unsophisticated, spoiled-child nature.

A Season of Rohmer


“A Season of Rohmer” (through June 30) showcases witty talkathons by Nouvelle Vague founding member Eric Rohmer (1920-2010), the most literary of French filmmakers frequently mentioned in the same vein as Henry James, Jane Austen and Stendhal. The rare complete retrospective of all his extant films unspools at the National Gallery, the American Film Institute Silver Theatre and La Maison Française.
(202) 357-2700, www.asia.si.edu/events/films.asp
(301) 495-6700, www.afi.com/silver

On Mondays in May, “Growing Up: German Youth in Film” (May 2-23, 6:30 p.m.) includes two documentaries and two features. “Kids World Cinema: Spain and Germany” (May 22, 2 p.m.) presents children’s films and workshops.