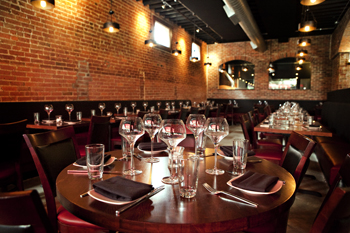 The recent opening of Agora, a Mediterranean restaurant in Dupont Circle serving Turkish and Greek fare, put to rest the speculation on what would replace recently closed Jack’s Restaurant that had become a favorite for some in the area. Although it’s one of many tapas-style restaurants to have opened in D.C. recently, Agora nevertheless takes dining in a completely different direction.

Exposed brick and ductwork creates a simple, comfortable ambience at Agora, which is matched by a straightforward Turkish inspired menu that showcases fresh Mediterranean flavors.

Agora is the realization of owner Latif Guler’s long-standing desire to open a Turkish restaurant in the nation’s capital. While growing up in Foca, Turkey, the restaurant business was a family affair for Guler. So it’s not surprising that when he set out to open Agora in Dupont Circle, he called on his father Hasim Guler, who owns several restaurants and a resort in Turkey, to help him carry on the family tradition.

For the kitchen, he tapped Ghassan Jarrouj, a noted chef specializing in Mediterranean cuisine whose recent work includes heading the kitchens at Sitti, a Lebanese restaurant in North Carolina, as well as Neyla in D.C. and Taverna Kefi in Maryland. The team has crafted a well-rounded menu that offers many traditional Turkish dishes, as well as some familiar Greek ones. Diners have a wide variety of dishes from which to choose to suit any palate and hunger. The menu is broken into several sections — cheeses, salads, cold mezes, hot vegetables, seafood, meat and poultry, and flat breads — each offering numerous choices. And with more than 50 items, it’s easy to have a small snack or build a complete feast. Portions vary in size but tend to be fairly small so it’s possible (and well worth it) to sample quite a few of the dishes.

Sitting at the crossroads of Mediterranean Europe, the Middle East and western Asia, Turkey has always been a cultural bridge, with cuisine that has evolved over centuries as both distinctly Turkish and characterized by different regional specialties. Yet they all share a common approach based on using a limited number of very fresh, local ingredients prepared in simple ways to preserve the integrity of each flavor. A dieticians’ delight, Agora’s menu features an intriguing array of dishes that frequently combine onions, tomatoes, garlic, peppers, olive oil (from Guler’s family farm in Turkey), lemon juice, herbs, beans and grains.

At Agora, seafood — a critical component in many of the regional cuisines in Turkey — is brought in fresh daily to prepare an array of typical dishes. Selections include the grilled dorade and branzino with olive oil, lemon juice, grilled bread and grilled lemon; kebab sword fish chunks marinated in ginger, garlic, lemon juice and olive oil; pan seared scallops in a saffron yogurt sauce; and grilled squid stuffed with shrimp-mozzarella on cilantro garlic — all of which are excellent. 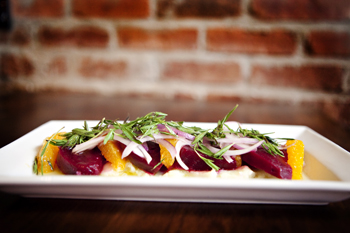 Meat and poultry choices are equally interesting. Some are familiar, such as a very well-executed kibbeh, a ground beef and bulgur dumpling shell, stuffed with ground beef, lamb and pine nuts. Others are more unusual, such as a filet mignon stuffed with Kasar cheese, sour cherry sauce and glazed shallots. Manti, a traditional Turkish pasta dish of tiny beef-stuffed raviolis, is served with garlic yogurt and red pepper sauce and offers an interesting contrast to the Italian preparation. Agora also features two types of dolma, grape leaves stuffed with hot rice, lamb and beef and topped with yogurt sauce. (This chard variety is a bit different than the more typical version because the texture of the leaves is much softer and offers less resistance when you bite into it.)

Even the lowly eggplant shines at Agora. Traditional imam bayildi — stuffed eggplant with onions, tomatoes, pine nuts and garlic — along with the patlican kozleme, a charcoal-smoked variety with green and red peppers expand the repertoire of meatless dishes, which is considerable, making Agora an excellent spot for vegetarians. Likewise, Ispanak — sautéed spinach with onions, garlic, pine nuts and red crushed peppers — is tart but still one of the best spinach dishes we seen in ages. Also notable is the beet salad with thick slices of beet arranged over a thin layer of lemon mashed potatoes, in alternating rows with garlic, orange, savory herb, onion, and lemon vinaigrette.

In addition, the menu features several pideler, the Turkish flatbread alternative to pizza. Whether topped with ground beef, lamb, tomatoes and parsley, or spicy Turkish sausage and pesto, or stuffed with Feta and Kasar cheese, each flatbread is a perfect snack or a nice way to whet the appetite for more to come.

While the dessert options are limited at Agora, each is special. The kadayif, a nest of shredded phyllo filled with a rich cream, is subtle and not too sweet. The portakal baklava is also less sweet than its Greek cousins, and much more aromatic. The Aegean delight — consisting of plump, dried apricots stuffed with walnuts and resting on a bed of thick pastry cream — is as well named as it is truly delightful.

Working with local architecture and design firm Brie Husted Architecture, along with a master carpenter from Turkey, Guler has created a very simple design for the space that emphasizes the fundamentals in the same way that his food does. Exposed brick and ductwork and finished cement floors merge to create a comfortable ambience with none of the modernist clichés often associated with this type of décor. The majority of Agora’s construction also comes from materials that are recycled or reclaimed, for an eco-friendly environment. 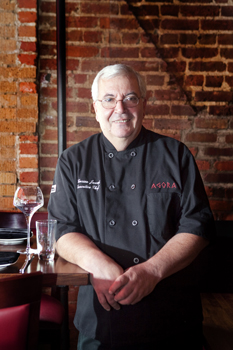 Before coming to Agora as executive chef, Ghassan Jarrouj led the kitchens of Sitti, a Lebanese restaurant in North Carolina, as well as Neyla in D.C. and Taverna Kefi in Maryland.

While the food is excellent and the interior comfortable (though on a crowded evening the noise levels are high), perhaps the feature that distinguishes Agora most is its service. All the staff are knowledgeable and helpful. They go out of their way to make you feel welcome and are attentive but not intrusive. And most unusual in the high-cooker, turnover dependent marketplace of D.C., you never feel pressured to leave because the servers need the table. With the outside seating Agora has considerable capacity so space is not currently a major concern. It will be interesting to see if the winter months change the staff’s patience.

Agora takes its name from the Greek word for gathering place. It is an appropriate description. Agora is the kind of restaurant you wish was in your neighborhood, preferably within walking distance because it’s tempting to over-imbibe with the excellent wine list (featuring a wide range of wines from the Mediterranean) and fanciful cocktails (who could resist an apricot bliss).

With all it has going for it, Agora is poised to fulfill its promise as a “Mediterranean oasis” and become a favorite spot not only for the neighborhood, but also for diners from throughout the area looking for a good meal at a fairly reasonable price (that just happens to be very good for you). Agora bills itself as “a taste of the Aegean.” That’s not quite accurate. It’s an all-around feast.

Reservations are accepted. Dress is casual.