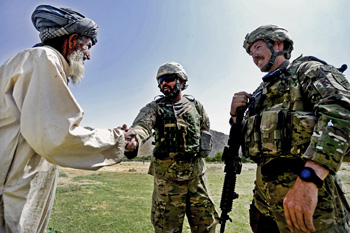 Congress is likely to extend programs that offer visas for Afghan and Iraqi nationals who assisted the U.S. military in the coming weeks, but the work to clear their sizable backlogs is just beginning.

The programs were designed to recruit Afghan and Iraqi locals to assist the U.S. war effort in those countries. In exchange, at the end of their service, those who worked for the U.S. government for at least one year would be able to apply for visas.

But thousands of applicants whose lives are in danger every day have been left waiting in limbo as the State Department decides their fates. In fact, they must demonstrate their lives face a persistent risk to even be considered for the visa — and even then that may not be enough to overcome the bureaucratic holdups.

The issue has become more acute as U.S. forces draw down in Afghanistan, leaving potentially thousands of eligible applicants and their families exposed to retribution from the Taliban. And supporters of the programs fear their muddled implementation could harm future efforts to court local assistance in combat zones.

“It’s about the contribution they made, but it’s also about American credibility. How do we persuade people in the future in a conflict to help us when we just turn our backs when we leave?” Sen. Jeanne Shaheen (D-N.H.), who helped push through a 90-day extension of the Iraqi program before it expired in October, said in an interview.

Congress first created the Iraqi program in 2008, giving State the authority to distribute 5,000 visas per year to Iraqis and their families — spouses, children, parents and siblings — over the course of five years. The Afghan endeavor followed in 2009 at a clip of 1,500 visas each year for five years, though those visas were limited to spouses and children. A similar program, which has no end date and specifically targets translators, offers 50 visas per year.

U.S. Army 1st Lt. Benjamin Riley, right, and a Provincial Reconstruction Team Zabul interpreter, center, meet a villager during a 2011 patrol in Afghanistan. In return for helping with the U.S. war effort, Afghan interpreters were given the chance to apply for U.S. visas, but the State Department has only approved a tiny fraction of the allotted visas so far.

The programs’ supporters have been working to get them extended because they say the State Department has issued just a fraction of those visas. The Iraqi Special Immigrant Visa (SIV) program had been set to expire Dec. 31, 2013, but was extended early this year as part the National Defense Authorization Act for fiscal 2014 (the Afghan counterpart closes Sept. 30, 2014). The NDAA extension, which was spearheaded by Shaheen and Sen. John McCain (R-Ariz.), authorizes the issuance of 2,500 immigrant visas after Jan. 1, 2014.

Foggy Bottom won’t comment on how many applications it has received for the visas so far. According to State documents, the department has fallen short of its 5,000-visa mark for the Iraq effort each year — handing out a total of 5,837 since the program began five years ago. It has also awarded 1,185 visas to Afghan nationals out of the allotted 7,500. That breaks down to roughly 200 visas for Afghan nationals a year, even though the State Department is authorized to approve up to 1,500.

Those familiar with the programs estimate the waiting list is in the thousands.

A lengthy, complicated, risk-averse bureaucratic process has led to years of delays for applicants and their family members, said Matt Zeller, a research fellow with the Truman National Security Project.

“It’s the goldilocks syndrome. You have to perfectly thread the needle,” said Zeller, a U.S. Army captain who fought to get his Afghan translator, Janis Shinwari, a visa.

It took two and a half years to get Shinwari his visa, Zeller said. And that’s relatively speedy — most of the few applications that are eventually approved take three and a half years, he said.

Shinwari succeeded where many others haven’t thanks in large part to a media blitz launched by Zeller with help from Change.org. The campaign captured the attention of CBS News, the New Yorker, National Public Radio and other major news outlets.

Zeller said he had a duty to help Shinwari because the translator saved his life in a firefight, killing two Taliban fighters in the process. They grew close enough to call each other “brother.”

As their relationship grew, so did the threats on Shinwari’s life. The Taliban one day found Shinwari’s car and scratched, “Your day of judgment will come” into the hood, Zeller said.

“They wanted more than their standard revenge for this. They wanted to make an example of him,” Zeller said. 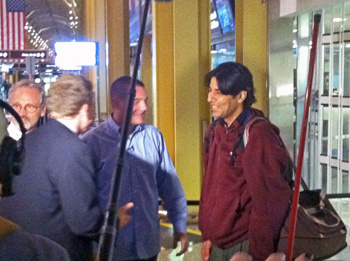 For his safety, Shinwari was transferred from Ghazni Province to live in a compound inside a Kabul military base. Over the next two years, he saw his wife and two kids three times. But he took on more responsibility for the U.S. military, agreeing to manage the 200 or so translators who also lived on the base.

The urgency to get Shinwari his long-awaited visa ramped up in July, when the contractor who employed him informed the translators that they would all be laid off when U.S. forces left the area in October. That would leave all of them to fend for themselves against potential retribution from the Taliban.

Shinwari’s visa was inexplicably revoked in September, sparking an urgent appeal by Zeller, who didn’t mince words about the delay. “For almost a decade of faithful, honorable and heroic service to the U.S., the State Department and the U.S. Embassy seem content to break our nation’s promise to the interpreters who risk their lives to help us,” the Army captain said.

While Shinwari, after many hiccups, eventually arrived in the United States at the end of October, many of his fellow countrymen still face mounds of red tape.

The visa application process is comprised of two steps. First, an applicant must complete one year of service for the U.S. government and provide all the documentation to support it — such as letters of commendation from commanders. Second, the applicant must clear an intensive multi-agency background review to quash any fears of a national security threat.

But that multi-agency portion can take a while, as clearance from each agency has a limited time window before it expires. So if the Department of Homeland Security clears an applicant but State doesn’t begin its review in time, the process starts all over again, Zeller said.

Shaheen said the Defense funding bill would make changes to the programs to eliminate some of those complications. One of the tweaks would force the federal government to approve or deny all applications within nine months, while another would require State to designate officials to oversee the process in Kabul and Baghdad.

“The renewed attention and interest in the program will help address the slow speed in which those cases were being processed,” Shaheen said. “If we don’t see that working, then we’re going to be providing some oversight.”

In any event, the State Department appears to be angling for Congress to give it a little more time to carry out the programs.

“We welcome any actions by Congress to extend the Afghan SIV [Special Immigrant Visas] program and to further extend the Iraqi SIV program,” it says on its website.

A State official said in an email that processing times have declined, but noted that the department would “continue to strive for even greater efficiencies.”

“More broadly, the State Department, and the other U.S. government departments and agencies involved in this process have the highest respect for the men and women who take enormous risks in helping our troops and diplomats. We are committed to helping those, who despite the risks, have helped us,” the official added.

The process is thorough and long because of the security risk involved, State said.

“We also have a responsibility to the American people to ensure that all those who enter the United States, including special immigrant visa recipients, do not pose a threat,” the official said.

The program’s supporters, however, say the security fears are overblown and the Afghans and Iraqis have been thoroughly vetted by the U.S. military. In fact, military service members like Zeller have often been the ones leading the fight to bring their interpreters to the United States. A four-star general intervened in one case to push through a visa for an Afghan translator who risked his life in an ambush to carry out the bodies of fallen American soldiers.

These military supporters say the interpreters have already proven their loyalty by risking their lives — sometimes for years on end — to help American troops.

But applicants must also prove that their lives are in actual danger, and some interpreters who’ve been denied visas complain about the seemingly arbitrary decision-making process. “What’s a serious ongoing threat for them? Do they need someone to bring in my decapitated head?” one interpreter told the Washington Post.

Those frustrations are sure to mount as Afghans who helped U.S. forces are exposed to even more threats from the Taliban as soldiers leave.

And that has many Afghans who threw their lot in with the United States feeling like they were duped, said Kirk Johnson, founder and executive director of the List Project, which he originally started to help get Iraqi translators their visas. He said Afghans and Iraqis who aided other nations have faced fewer headaches securing visas.

“If we’re looking at image, the image is in tatters at this point. It’s already common knowledge in the Middle East that we just left these people behind,” Johnson said in an interview. “They’re like the laughingstock [among other locals] for standing by us.”

Congress approved the program’s 7,500-visa authorization before the U.S. presence spiked by 30,000 to surpass 100,000. The number of Afghan personnel on which those soldiers depended ballooned as well.

But there hasn’t been a commensurate bump in the amount of visas available to Afghan nationals, nor does there appear to be one coming. The language in the Senate Defense Authorization Act would leave that number unchanged.

As such, Zeller said the program is “grossly inadequate” — though his main focus is on making sure State can adhere to what it’s already agreed.

“We had no idea how egregious and horribly managed the process is,” Zeller said of when he first started pushing for Shinwari’s visa.

Capitol Hill has picked up on that. The Senate unanimously passed the short-term extension for the Iraq program and the House did so under suspension of the rules — a device used for noncontroversial bills. The program also has attracted letters of support from both sides of the aisle and in both chambers.

Johnson said he wants to see more urgency out of the Obama administration. He suggested that an executive order from President Obama could end the stalemate overnight.

“Obama is not taking a lonely stance here,” Johnson said. “We all came together and said, ‘Yes, we have to do this.’”

That step is unlikely considering Congress moved on the issue by incorporating the Iraqi extension into the latest Defense spending bill.

“I don’t think I can say anything more [about the level of support] than that in the middle of the government shutdown, we were able to get this passed by unanimous consent,” Shaheen said, referring to the Iraqi visa extension. “Our goal is to make sure those [administrative] obstacles are reduced.”

Zachary Colman is a freelance writer in Washington, D.C.