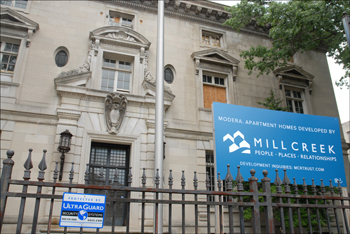 The Italian Embassy at 2700 16th St., NW, is a vision in neo-Renaissance style. Even surrounded by dust, weeds and dented construction signs, the vacant terra cotta building, called Il Palazzo, manages to retain its dignity, its dimension and its limestone detail. The word “cancelleria” (Italian for “chancellery”) is engraved over a doorway and ornate carvings adorn the aged gray walls. Proud black light fixtures flank the entrance and finely spaced corbels jut from beneath the Mediterranean-tiled roof.

But for many Adams Morgan residents, the prominent site has long been a questionable work-in-progress, as well as a fixture of frustration, since it was slated to become the neighborhood’s newest luxury apartment building. That was almost 10 years ago.

In May 2010, the Washington Business Journal reported that Valor Development had purchased the storied 35,000-square-foot mansion from Embassy Real Estate for $7.5 million with plans to convert it into condos. At that point, the Italian Embassy had been settled into its new location on Whitehaven Street, NW, for nearly a decade. And Il Palazzo, which was built in 1925 and designed by Whitney Warren and Charles Wetmore, had since been designated as a historic landmark.

Embassy Real Estate, for its part, had already been trying for years to turn Il Palazzo and its valuable 44,000-square-foot lot into condos as the neighborhood’s value and desirability skyrocketed. But the company hit a roadblock when the city realized the construction permits had been issued after the landmark application was filed. The permits were revoked and the property’s future was in limbo for years.

Hope was temporarily restored after the sale to Valor, but 2700 16th was still to remain empty, despite enthusiasm for the project and plenty of ambition behind it. Local media and blogs circulated conceptual drawings of possible plans, which initially had several of the bigger, pricier units to be built into the original four-story mansion and another much larger building erected behind it for studios and one-bedroom homes, presenting around 130 for-sale apartments in all. But there were rumors of a struggle to conceive a final plan that met with historic approval. Eventually, the story, along with Il Palazzo, fell asleep for a little while.

The Journal’s Michael Neibauer says the project’s main problem during that time period was money.

“Financial issues caught up to the project’s co-managers shortly after the 2011 zoning approval, as the partners ‘found underwriting the project challenging,’ according to a March 2014 request to extend the PUD [planned-unit development] for an additional two years,” said Neibauer in a July 24 article for the Journal. “After unsuccessfully seeking another partner, the Stafford-based Garrett Cos. in late 2013 refinanced the loan on the lot and took over the project from Valor, bringing in a slew of consultants to finally put shovel to ground.”

A sign of life reappeared at Il Palazzo last year when the Washington Post reported a go-ahead with the project under the direction of Potomac Construction Group. The plans now included a penthouse, along with six “affordable” units. Neighbors watched as workers started arriving at the site, but their first and only task at that point seemed to be cleaning up some light vandalism. 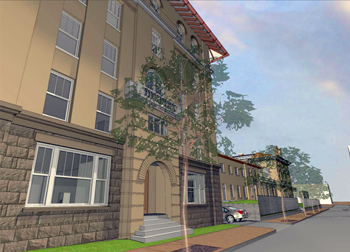 Trout Design Studio was assigned to redesign the former Italian Embassy, named Il Palazzo, a rendering of which is shown above. But the developers apparently never got the needed permits from the D.C. government, leaving the project to languish until Dallas-based real estate developer Mill Creek Residential Trust purchased the property in June for $16 million.

Trout Design Studio, the Washington architectural firm assigned to the project, was interviewed by DC Elevation Media a couple of months later. The studio’s principal architect, Michael Beidler, spoke of the construction schedule and design plans for what was now named “The Flats at Il Palazzo.” It seemed dirt was finally breaking on what the studio calls “the crown of historic Embassy Row.”

“The plan has not changed from the original [residential] program,” Beidler told DC Elevation in April 2014, noting that developers were in the process of getting a building permit from the D.C. government. “Because of the scale of the space, the larger, luxury units will go primarily in the embassy,” he explained. “But they will also be scattered among the other buildings, especially the upper floors of the tower, which will have spectacular views and terraces.”

But the city once again began to grow impatient as Il Palazzo became a construction site — and seemed to remain that way for some time. An application was filed the same month as Beidler’s interview, but the permit reportedly never materialized.

A year passed before a conversation began on the popular D.C. blog Prince of Petworth when a reader bluntly asked, “What’s going on?”

“The white flyer on the right lists violations for overgrowth of the yard and graffiti,” wrote the reader on May 28. “Admittedly, I don’t think I’ve noticed any work being done since maybe last summer, but this seemed like it was going to be such a cool development and use of a great old building!”

A month later, the neighborhood would have its answer: yet another transfer of ownership. Dallas-based real estate developer Mill Creek Residential Trust took over the long-delayed construction plan and purchased the property in June for $16 million — a black-and-white (or perhaps green-and-white) display of surging property values in the District.

A big shift in this chapter for the Il Palazzo saga is that Mill Creek deals exclusively in the rental market, a perpetually hot (and only getting hotter) area in Washington real estate. The company already owns one property in D.C. on the Southwest Waterfront and three Virginia properties in Vienna, Alexandria and Fairfax. Though its national headquarters is located in Dallas, the company’s main office for development and acquisitions is just outside the beltway in Rockville, Md. 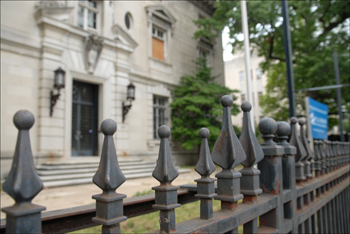 “Supply will remain a concern,” Caldwell, a native Washingtonian, remarked in a discussion about the District’s rental market. “But demand has overshadowed that concern.”

That demand is what Mill Creek is banking on as they move ahead with their plans to turn Il Palazzo into a rental property, pushing the condo prospects for the building aside. Though the former embassy will remain a luxury venture with its new owners, one that Caldwell says he is excited to develop. In a press release, he stated that Il Palazzo’s history and tony Adams Morgan address (at the border with equally desirable Columbia Heights) would make it a profitable investment for all involved.

“The residences at the Italian Embassy will offer a level of prominence and prestige that we believe will offer significant value for our residents and our investors,” said Caldwell.

Mill Creek’s plans were revealed June 30 when the company presented a nine-story building behind the original four-story terra cotta mansion that will house apartments ranging from studios to three bedrooms. The plan also includes two levels of underground parking, a fitness center, outdoor terraces and a business area. A new name for the former “Flats” has yet to be announced.

Yet the wait isn’t quite over for neighborhood residents — or for prospective residents eager to live beneath the Mediterranean tile rooftops. There’s still much work to do before Adams Morgan can look upon open doors and warm lights in those proud black sconces at the Il Palazzo compound. Mill Creek’s construction plans aren’t scheduled to begin until next year.